Queen Consort is ‘definitely’ watching The Crown but programme does not ‘tickle’ her husband’s interest, King’s former communications director claims

The Queen Consort ‘definitely’ watches The Crown, according to the King’s former communications director – but admitted the programme does not ‘tickle’ His Majesty’s interest.

Kristina Kyriacou, who advised the monarch when he was the Prince of Wales between 2009-16, made the comments while on talking to Phil and Holly This Morning on 10 November.

She was very critical of the new series and said it should show a disclaimer telling viewers the content is dramatised.

Ms Kyriacou worried the new series could distort young peoples’ perception of the monarchy, becuase millennials and Gen Z might think it is more accurate than it is.

She was very critical of the new series and said it should show a disclaimer telling viewers the content is ‘dramatised (Pictured: Olivia Williams as Camilla Parker-Bowles, Dominic West as Prince Charles)

She added the explicit phone conversation between Charles and Camilla being used would have been painful for the family.

She told This Morning: ‘I think the Queen Consort will have definitely been watching it… [she] keeps in touch with her family her friends, it’s an enormous series.’

Ms Kyriacou added: ‘It’s a one sided narrative that is 30 years old. Out of respect to his ex-deceased wife and children he would never talk about that situation. 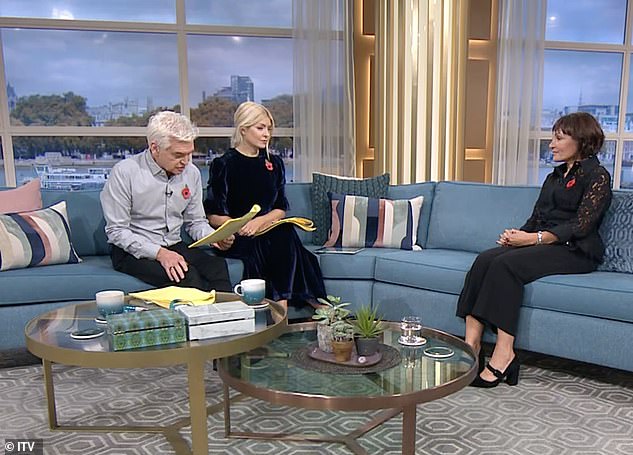 Kristina Kyriacou (pictured right), who advised the monarch when he was the Prince of Wales between 2009-16, made the comments while on This Morning on 10 November.

‘It’s a dialogue that is fuelled by speculation. It doesn’t serve anyone very well to keep rehashing things.’

The news comes after a Royal expert last month said the Queen Consort ‘watches the Crown’ with a stiff drink.

Katie Nicholl told talk TV: ‘I think good for her because she watches it and takes it in the spirit with which it’s intended which is with a good pinch of salt.’

The Crown’s fifth series is likely to shock viewers with its explosive plots and fictionalised storylines – with the new season of the Netflix drama released today amid mounting backlash over the ‘insensitive’ portrayal of the Royal Family during the Nineties.

As the drama – which has spanned over several decades – reaches recent events that will be fresh in some viewers’ minds, the show has been criticised for sensationalising situations and falsifying plots.

Among them are Charles and Diana’s marriage breakdown, the late royal’s controversial Panorama interview and the famous ‘tampongate’ phone call between the King and Queen Consort, then Camilla Parker Bowles.

Elsewhere, a frustrated Charles is shown trying to jostle for power from the Queen, while Prince Philip develops an intimate friendship with Penny Knatchbull over their love of carriage driving.

The series has been slammed for inaccuracy by prime ministers Sir John Major and Sir Tony Blair.