The Queen Consort’s nephew Luke Parker Bowles has claimed he received death threats at boarding school as his family desperately tried to avoid ‘the chaos’ of Camilla’s relationship with King Charles.

Speaking to The New York Times, the film and television producer, 44, who grew up in the UK and now lives in New Jersey, said his distinctive surname made him a target for bullies as a teenager.

Reflecting on his education, Luke explained: ‘When I was at boarding school, I remember getting bullied and even death threats because people put together that Diana had died because of Camilla, and therefore I had killed Diana by association.’

The father-of-three – who lives in Montclair, New Jersey, with wife Daniela, 47 – said both his parents and grandparents encouraged him to get involved at charity work at school to distance himself from ‘the chaos’ of his aunt’s relationship.

Following the Princess of Wales’ tragic death in 1997, Luke said he wanted to find ways to ‘deflect’ the negative attention he was receiving at school.

Luke Parker Bowles, 44, said his surname made him a target for bullies as a teenager. The father-of-three grew up in the UK and now lives in Montclair, New Jersey 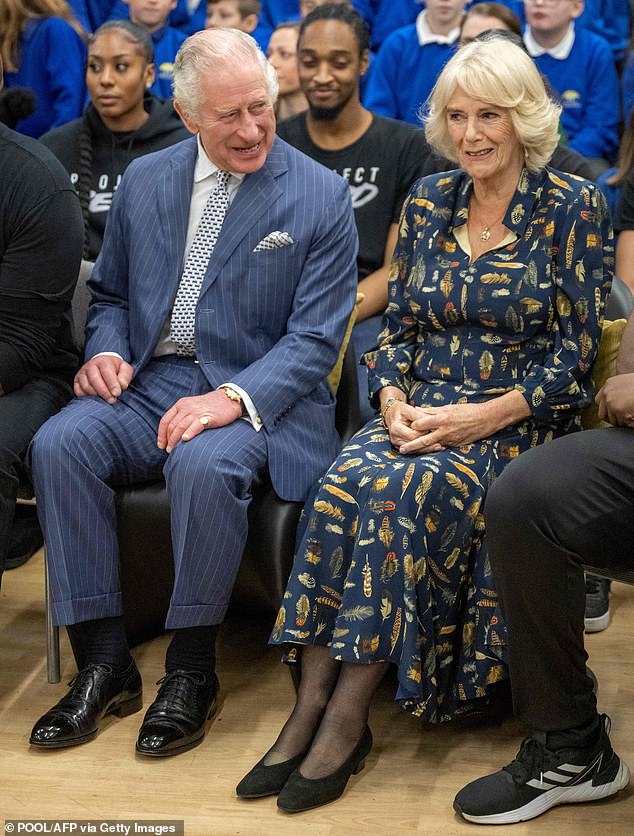 The Queen Consort’s nephew said his family encouraged him to get involved in charity work at school to avoid the ‘chaos’ of Camilla and Charles’ relationship. King Charles and the Queen Consort pictured visiting a London youth centre on October 18, 2022

Describing how it was ‘not a happy time’, Luke explained how he took part in a three-hour swimming challenge to raise money for charity and took pride in helping others in need.

Since then, Luke has supported New York-based non-profit organisation Royal Society of St George and is a Senior Ambassador for Comic Relief – having raised more than $60,000 for the charity.

Earlier this week, the father-of-three was quizzed by The Today Show host Kenna Bush Hager about the impact Charles and Camilla’s relationship had on the wider family.

During the television interview, Luke stressed how it was ‘much tougher’ for Camilla’s children Laura, 44, and Tom, 47. 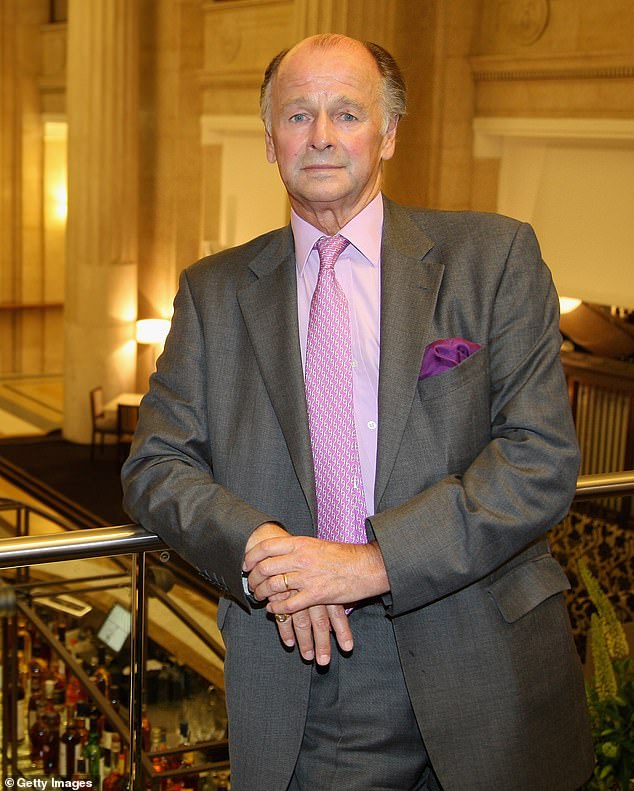 Luke is the son of investor Simon Parker Bowles, 80. Pictured at the opening of the new Greens restaurant and Oyster Bar on September 1, 2009 in London 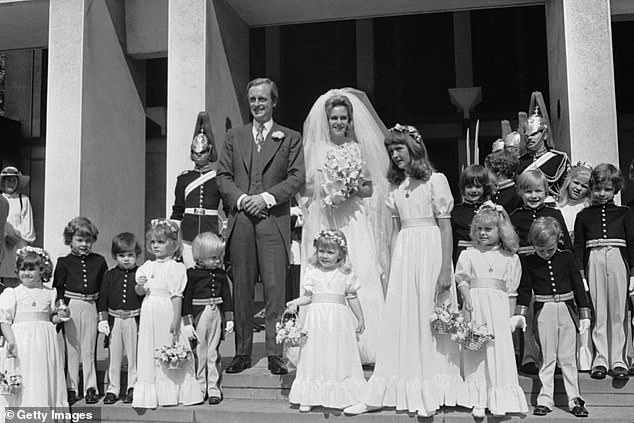 Luke said: ‘It was a rough time. I have to be very clear, it’s much tougher for my cousins. But somehow, kids, as they are, age 13, Diana had just tragically died, and Camilla and Charles were public.

‘And in some strange, convoluted way, people associated Diana’s death with Camilla. So being in the middle of that, and kids can be cruel, it was not a great time to be a Parker Bowles. But it hasn’t scarred me.’

In her 2010 biography Harry and William, royal expert Katie Nicholl claimed that Prince William and Camilla’s daughter Laura Lope would have ‘terrible fights’ over ‘who was to blame for their broken homes’.

An insider said: ‘William would blame Camilla for all the hurt she had caused his mother, which would send Laura into a rage. 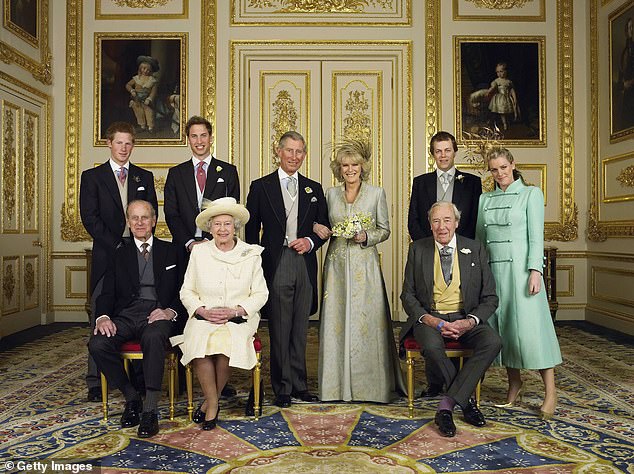 King Charles married Camilla in a civil ceremony in Windsor on April 11, 2005. Before her death on 8 September 2022, The Queen said it was her ‘sincere wish’ that Camilla would be known as The Queen Consort

‘Laura was not having any of it. She would take a hard line and fire back at William: “Your father has ruined my life!”‘

What’s more, the royal author says Camilla’s children were ‘teased mercilessly’ about her relationship with the King.

She continued: ‘When Charles telephoned Camilla at the family home in Wiltshire, Laura would pick up an extension and shout down the receivers, “why don’t you stop calling mummy and leave our family alone.”

‘She couldn’t care less that it was the Prince of Wales, she blamed him for breaking her parents’ marriage and was not afraid to tell William so.’

1970 – Charles and Camilla meet at a polo match in Windsor. The couple date for eight months before the Prince of Wales leaves for his Royal Navy Service

1973 – Camilla Shand marries Andrew Parker Bowles. Charles and Camilla remain friends and the Prince of Wales is named as her son Tom’s godfather

1986 – Prince Charles and Camilla begin their affair, according to the King’s authorised biography

1989 – Diana allegedly confronts Camilla at a party and tells her: ‘I know what’s going on between you and Charles.’ Camilla allegedly replies: ‘You’ve got everything you ever wanted. You’ve got all the men in the world fall in love with you and you’ve got two beautiful children, what more do you want?’

1995 – Camilla and Andrew Parker Bowles divorce. Diana says in Panorama interview that there were ‘three of us in this marriage so it was a bit crowded’

1996 – Charles and Diana’s divorce is finalised

2005 – Charles and Camilla marry in a civil ceremony in Windsor

In April 2005, King Charles and the Queen Consort married in a civil ceremony at Windsor Guildhall, which was followed by a Church of England Service of Prayer and Dedication at St George’s Chapel.

In February this year, The Queen – who passed away aged 96 on 8 September – issued a statement saying it was her ‘sincere wish’ that Camilla be referred to as Queen Consort.

In her message to the nation – signed ‘Your Servant, Elizabeth R’ – the Queen said: ‘When, in the fullness of time, my son Charles becomes King, I know you will give him and his wife Camilla the same support that you have given me; and it is my sincere wish that, when that time comes, Camilla will be known as Queen Consort as she continues her own loyal service.’