Over the last 65 years she has entertained hundreds of dignitaries from around the world.

So it is of no surprise the Queen has learned a trick or two when it comes to making people feel at ease in her company.

The 92-year-old monarch showed off easy-going nature when she hosted a group of young Commonwealth leaders in a scene filmed for ITV documentary Queen of the World.

The Queen was hailed ‘amazing’ and ‘lovely’ by viewers as she expertly guided her guests through the conversation. Fans commented that it transformed the daunting private Buckingham Palace audience into an ‘informal chat’.

The Queen was hailed ‘amazing’ and ‘lovely’ by viewers as she expertly guided her guests through the conversation. Others commented how kind it was to host the young leaders

In a standout moment the Queen broke through the tension with a light-hearted comment about the nose flutes she had heard during a 1953 visit to Tonga.

‘We had people playing nose flutes outside our window,’ she recalled. ‘The most extraordinary thing… It sounds awfully uncomfortable but they play rather well.’

The curious detail prompted a giggle from all three of her guests.

Emotional viewers said they were left ‘in tears’ by the Queen’s kindness throughout the episode.

Emotional viewers said they were left ‘in tears’ by the Queen’s kindness throughout the episode. One said she made the audience feel more like an ‘informal chat’

One said: ‘I spend most of my time watching with tears in my eyes’.

The episode was the second in the two-part ITV series, which explores Her Majesty’s role as head of the Commonwealth as she gradually passes the baton to younger members of the royal family.

The episode saw young leaders from every Commonwealth nation gathering in London to be honoured by the Queen.

Three of them, including Elizabeth Kite from Tonga, were later selected to join Her Majesty for a private audience at Buckingham Palace. 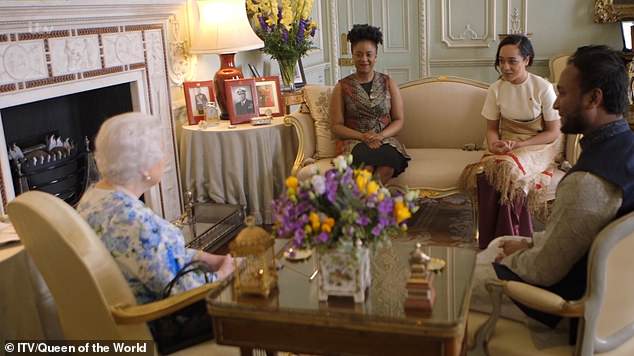 The Queen recalled the sound of nose flutes being played outside her window on her visit to Tonga in 1953, which she described as ‘just the most extraordinary thing’ 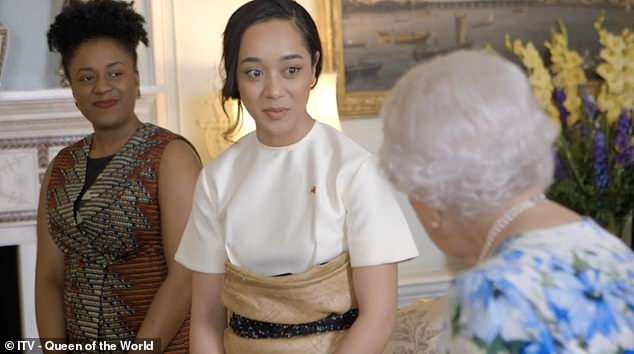 Elizabeth Kite, seen centre, told the cameras she was ‘extremely nervous’ ahead of her audience with the Queen, but afterwards said their meeting was proof ‘anything is possible’

Miss Kite, who was named after the Queen, confessed to being ‘extremely nervous’ ahead of her meeting with the monarch, but said afterwards it was proof that ‘anything is possible’.

‘I just had a chat with the Queen,’ she says after leaving the room. ‘I’m going to wake up tomorrow and feel, like, did that happen? I don’t quite know…

‘Honestly anything really is possible. Whatever it is you dream to be you can actually achieve.’

During the meeting the Queen reflected on her visit as a 27-year-old newly anointed monarch, and recalls finding it difficult to sit cross-legged, as is the custom in Tonga. 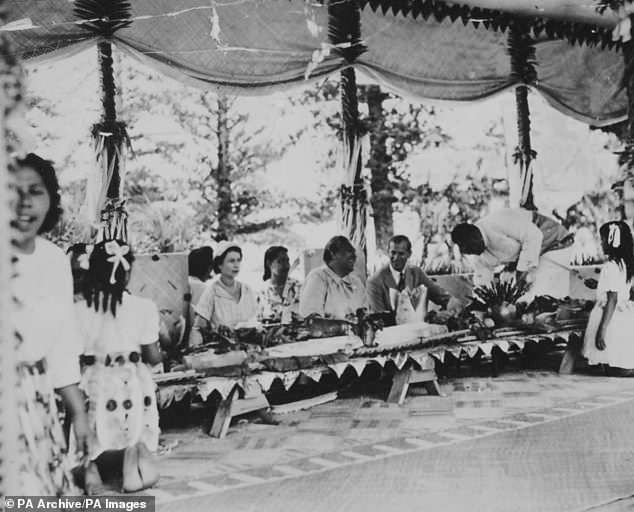 The Queen jokes in a new ITV documentary that sitting cross-legged for long periods proved rather ‘painful’ during her 1953 visit to Tonga, on her Commonwealth tour with Prince Phillip

‘It’s quite painful for people who are not built in the same direction,’ she quipped.

The Queen was welcomed to Tonga in 1953 by Queen Salote, who held a great open-air feast in her honour, where guests sat cross-legged around long, low tables.

The monarch, who has been head of state for 66 years, also talks of how she has met an ‘awful lot of people’ in her role.

‘But, you see, I haven’t been for such a long time. I’ve met an awful lot of people.’ 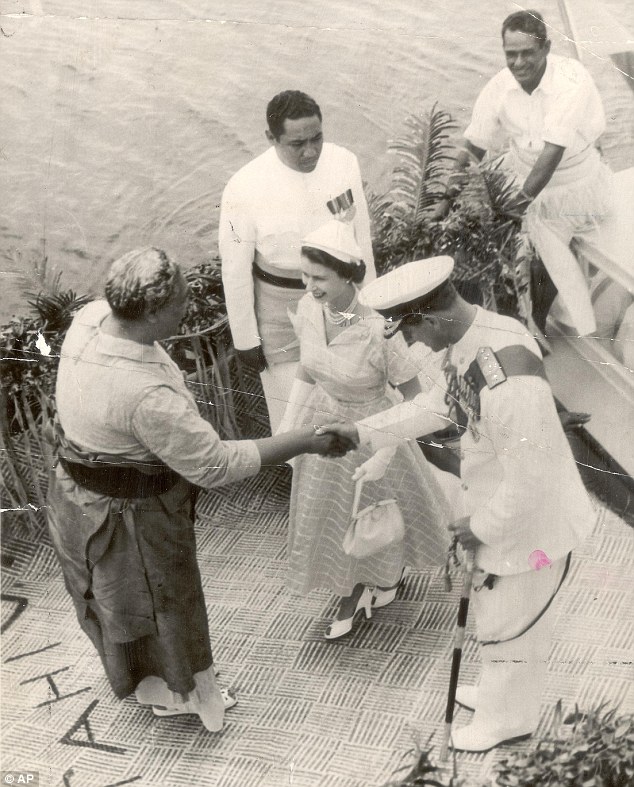 Queen Salote of Tonga is seen greeting Queen Elizabeth and the Duke of Edinburgh during their 1953 Commonwealth Tour. Her Majesty reflects on the visit in a scene from ITV’s Queen of the World documentary, the second part of which airs tonight