Queen Letizia looked the picture of elegance as she welcome the Italian president to the Royal Palace in Madrid today.

The Queen of Spain, 49, accompanied her husband, 53, in greeting Sergio Mattarella, his wife, Marisa Chiazzese and his daughter, Laura Mattarella.

For the occasion, Letizia donned a below-knee tweed dress with long sleeves in muted mottled grey mixed with pinks and blues. 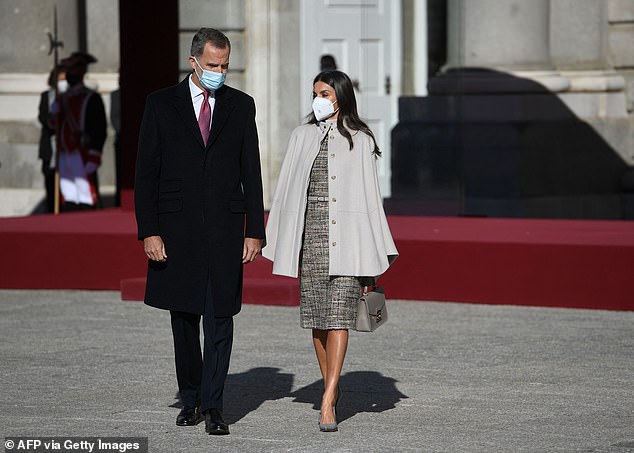 Spanish style: Felipe VI, dressed in a black suit, and Letizia chose a grey tweed dress for their outing together 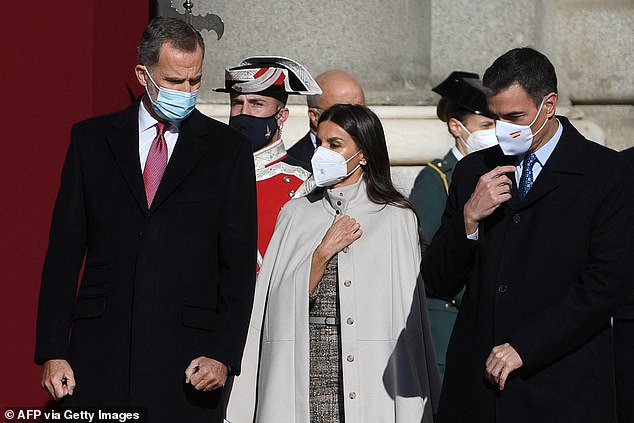 The couple were a stylish pair, and each showed off their individual styles as they hosted the event 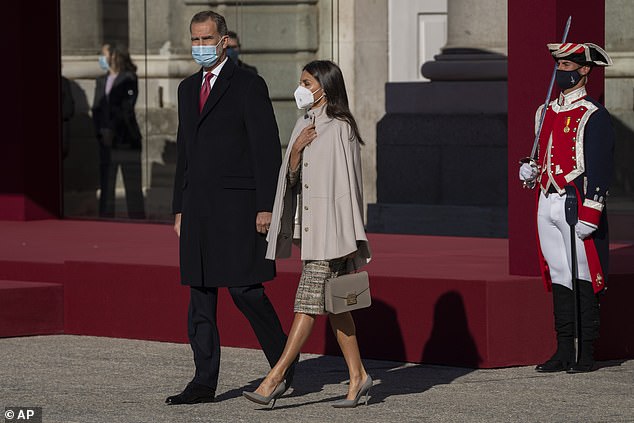 Not to be outdone, Felipe looked sharp in his black suit, which he paired with a white shirt and a red tie, pictured

The mother-of-two put on a stylish display as she wore a beige buttoned poncho over her shoulders that featured a high neck collar.

The glamourous royal matched her ensemble with grey court shoes and an accompanying handbag of the same colour.

Letizia kept the look simple by wearing discreet jewellery in the form of a small diamond-encrusted feather on each ear.

The royal wore her hair loosely down to fall around her face and tucked it behind her ears in a a chic do. 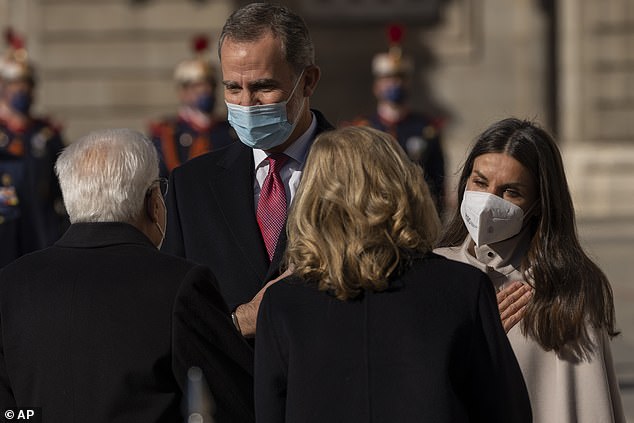 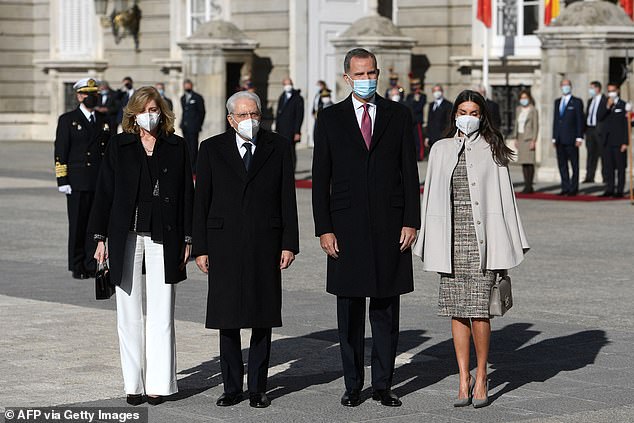 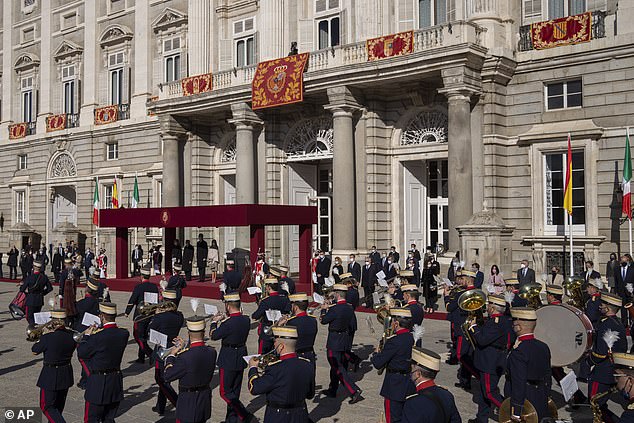 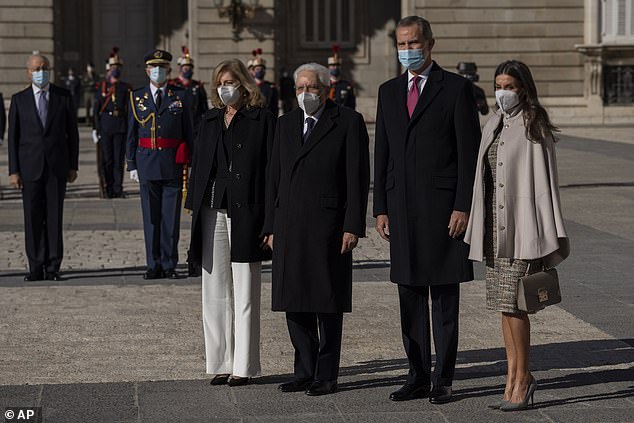 Letizia’s hair was styled straight, and she kept the look simple with a dash of makeup. Felipe VI and her were both wearing face masks

King Felipe VI wore a sharp dark suit with an overcoat for warmth and a red tie.

The welcome comes after the royal pair visited the Municipal Transport company and were treated to a tour of its old buses, including a blue and white double-decker bus.

The royal couple hopped on the bus and were seen sitting on the top floor of the vehicle. 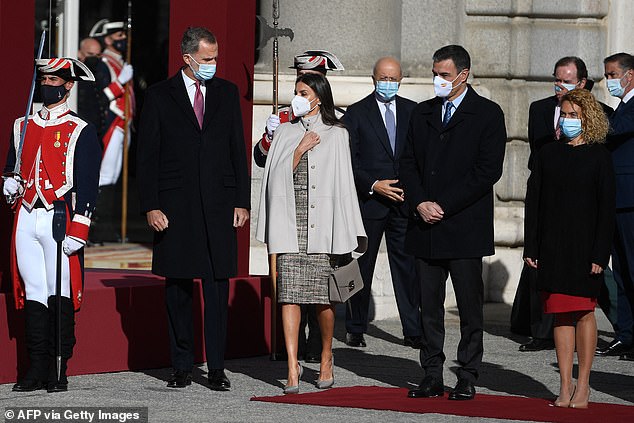 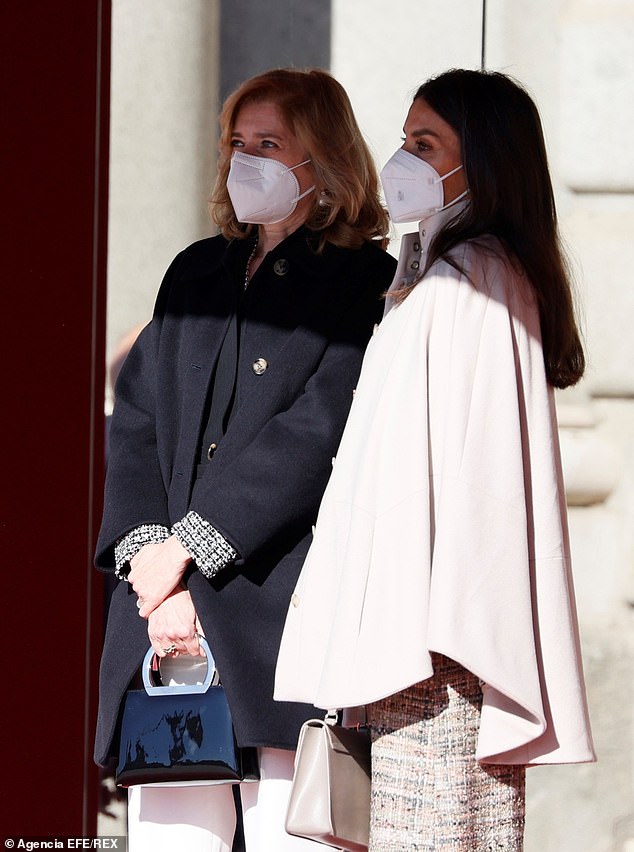 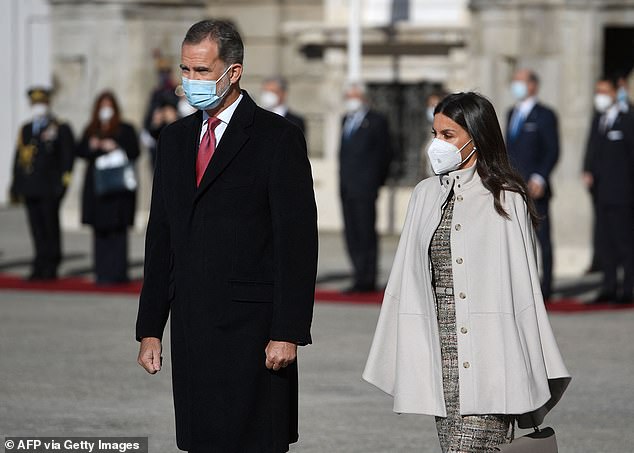 They also stepped out to enjoy an evening of music in Madrid.

The Monarchs attended the premiere Of The Opera ‘Partenope’ at the city’s Royal Theatre.

For the occasion, Letizia donned a £139 black sleeveless top from Hugo Boss with wide-legged trousers from Carolina Herrera, which she paired with black accessories to achieve the glamorous evening-wear look.

The mother-of-two put on a stylish display with the trendy wide-legged Palazzo trousers from the Spanish designer.

She paired it with a sleeveless top with a high neckline and glittering detail, which she tucked in the trousers to accentuate her petite frame and slender waist.