It’s back to work for everyone this week, including Queen Letizia of Spain, who donned a splendid navy dress for her first event of the year.

The mother-of-two, 49, turned heads in the number at the traditional Pascua Militar ceremony in Madrid this morning.

Wrapped in a short black coat, the Spanish royal, who enjoyed the Christmas break with her family away from the spotlight, looked well rested at today’s event, which was combined with a reception at the Palacio Real, to mark Epiphany – a national holiday in Spain.

Considered almost as important as Christmas Day itself, Epiphany marks the moment when baby Jesus, at just a few days old, was seen for the first time by the Magi or Three Kings.

Back to school! King Felipe VI and Queen Letizia of Spain returned to royal duties this morning to mark the traditional Pascua Militar

The 49-year-old royal looked sumptuous in the royal blue dress, adorned with the Queen Ena brooch, made of pearls and diamonds

Tradition has it that the Queen always has to wear a floor-length number for this first engagement of the year, and Letizia picked a magnificent navy blue gown for the occasion.

The dress was buttoned up on the bust and tied at the waist with a bow, which accentuated Letizia’s petite silhouette.

The skirt of her dress moved gently as she walked, revealing a pair of leather black stilettos.

With a crisp winter wind sweeping over Madrid today, the mother-of-two wrapped up in a fur bomber jacket in black as she stood next to her husband during the ceremony.  Her hair was tied in a neat bun, which revealed a pair of silver hoop earrings.

The royal, who is known for her love of minimalist fashion, kept the look sober by wearing little accessories, apart from her favourite Karen Hallam ring.

She was proudly sported the Queen Ena’s brooch, which is made of two pearls and diamonds.  She sported her everyday make-up with a dash of bronzer and a sculpted brow. 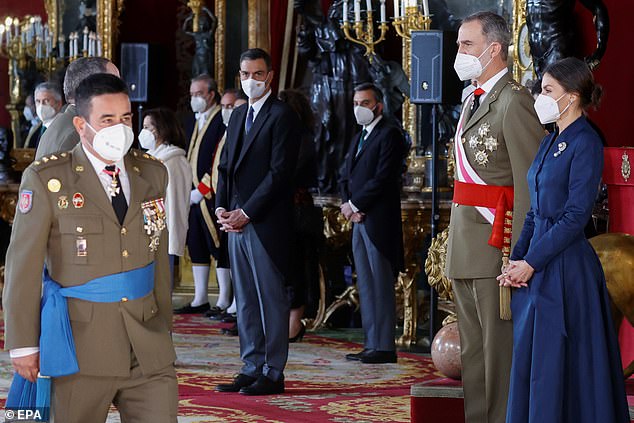 The royal couple, who are resuming royal duties after a two-week-long break, looked well rested and relaxed today 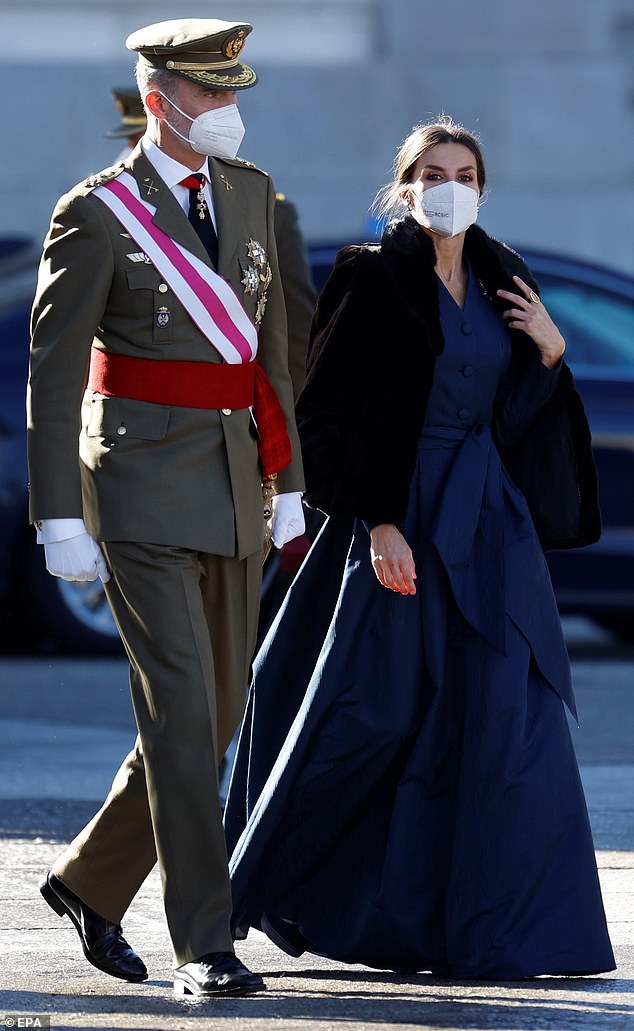 Meanwhile her husband Felipe, 53, Supreme Commander of the Armed Forces, donned his full military regalia for the event.

Known in Spain as El Día de los Reyes (Day of the Kings), it is celebrated with presents and colourful parades, the oldest of which takes place in Valencia.

The biggest and most important, however, is Madrid’s – thanks in no small part to the presence of a real king at the procession. 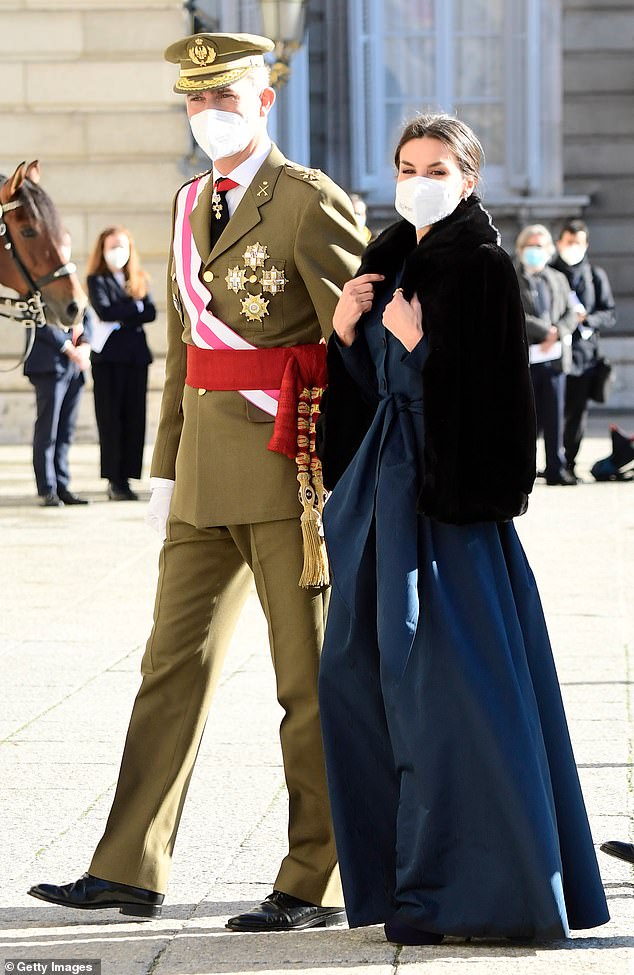 It was sunny in Madrid this morning, but a cold wind swept the Spanish city, forcing Letizia to wrap up in a fur coat 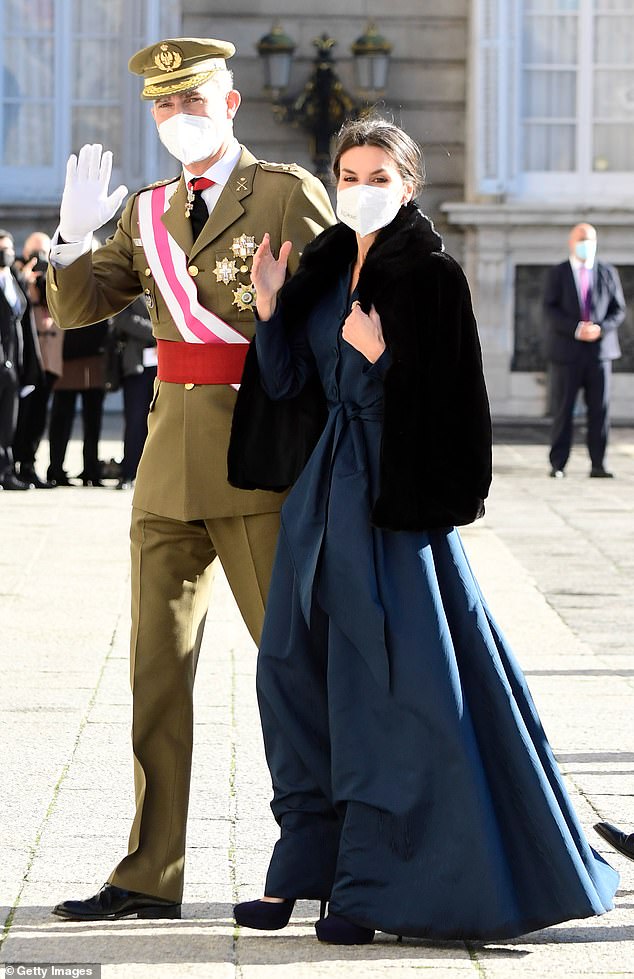 Smile and wave! Felipe and Letizia made their way to the ceremony at Zarzuela Palace this morning 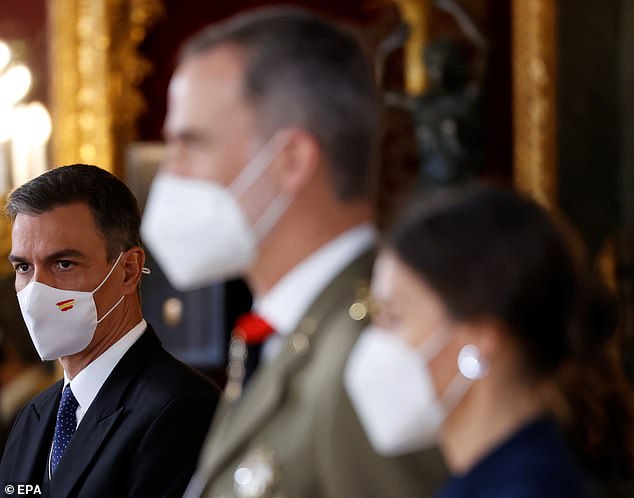 Spanish Prime Minister Pedro Sanchez, who wore a face mask adorned with the Spanish colours, looked pensive during the event

It also mark’s the sovereigns’ return to public duties after a two-week-long Christmas break with their daughter Princess Leonor, 16 and Princess Sofia, 14.

Letizia’s last engagement of 2021 was on December 20, wheb she attended the annual meeting of Cervantes Institutes directors in San Sebastian.

The Institutes all have a common aim to promote the Spanish language across the world, and Letizia

The mother-of-two sported a stylish look for her last engagement of the year with the trapeze Massimo Dutti skirt.

The cut of the hem counter-balanced its woolen fabric and added levity to the Winter number. 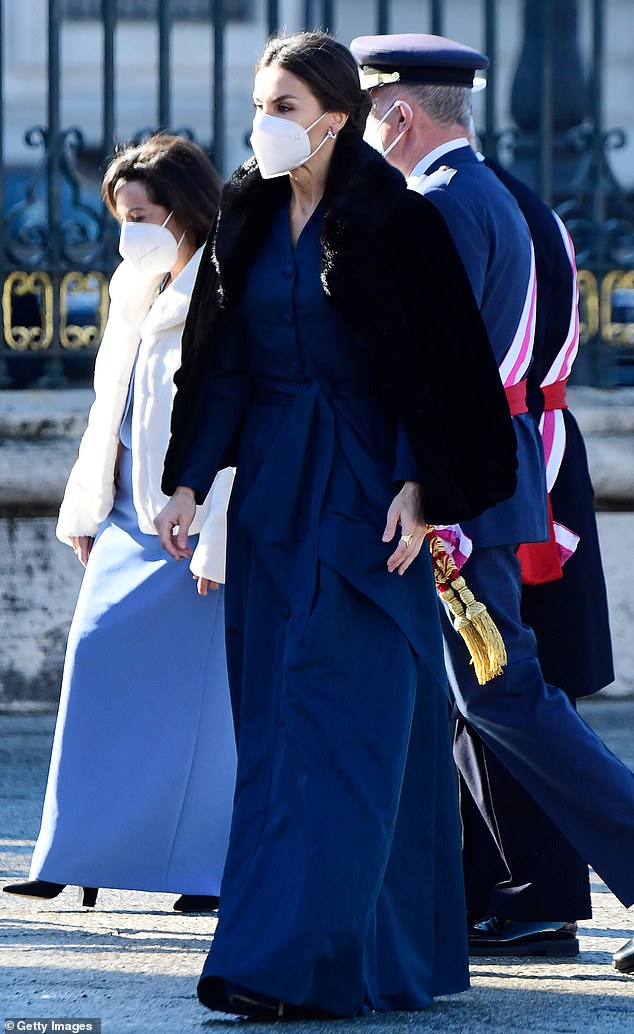 Letizia wore the blue dress with a fur coat, and donned a neat bun to brave the cold gust of winds this morning 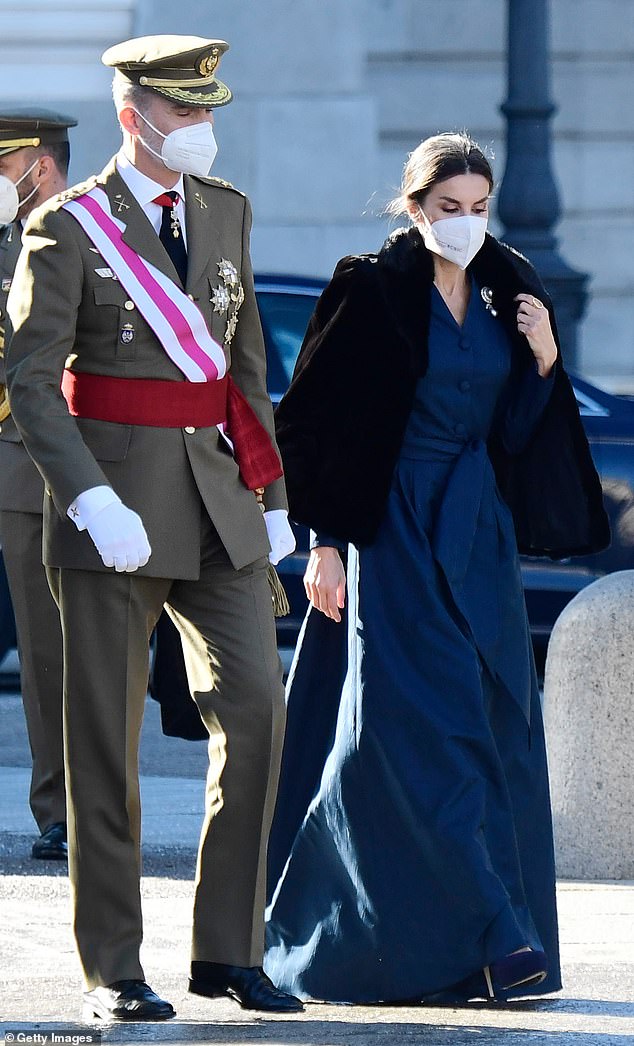 Stepping into the new year like royalty! Felipe VI and Letizia have enjoyed a family Christmas away from the spotlight, but it’s back to work from today