King Felipe VI’s wife wore an eye-catching Hugo Boss dress to attend the event, which is in its 80th year, at El Retiro park, in the centre of Madrid.

Looking in good spirits, the mother-of-two, whose older daughter studies at The UWC Atlantic College in Wales, met with booksellers, author and publishers present at the fair.

The event, which debuts today, will go on until 26 September and will see publishers booksellers and distributors meet and shape the literary landscape of Spain.

Queen Letizia of Spain, 48, looked bright in a Hugo Boss dress as she attended the 80th Madrid Book Fair today

Letizia looked very stylish for the event in the Hugo Boss number, a navy form-fitting dress which was peppered with splashes of light colours and magenta, ruched around the waist.

She brought the attention to her petite figure by tying the midi dress with a thin dark blue belt.

She paired it with fuchsia heels in snakeskin by Carolina Herrera, one of her favourite brands when it comes to footwear.

Keeping her accessories to a minimum, she wore her favourite ring from Karen Hallam, with a discreet pair of golden hoop earrings. 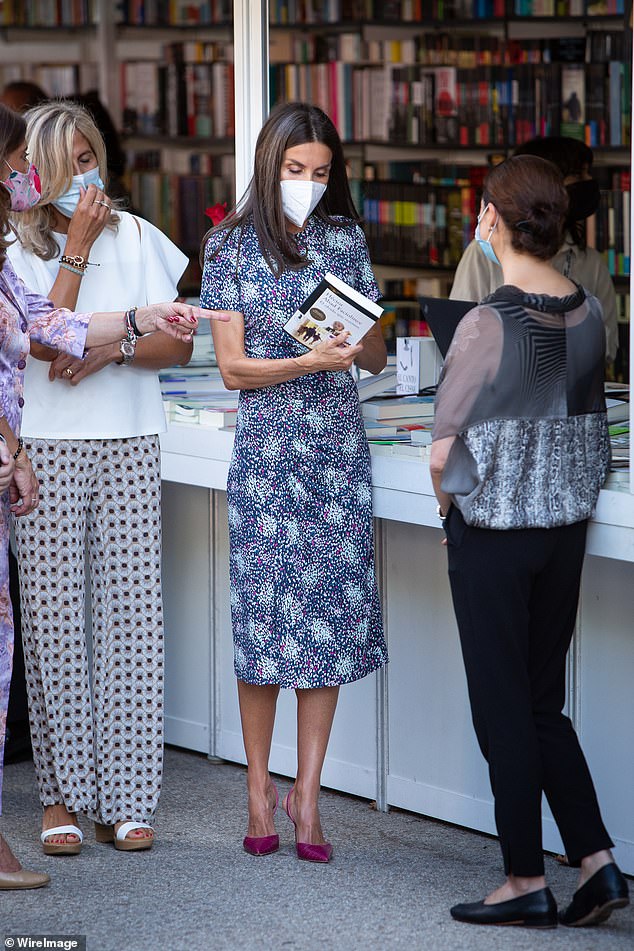 The royal look stylish in the blue number, which was splashes with light blue and magenta dots , as she flicked through some of the books making their debut at the fair 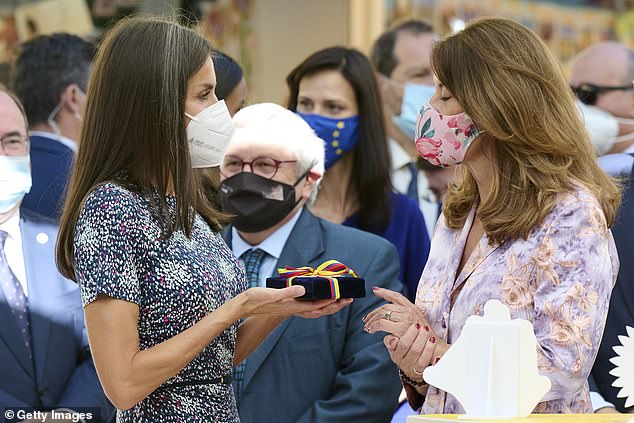 During the fair, Letizia received a present during the inauguration of the book fair, for which she wore a Hugo Boss dress

She kept the overlook simple and efficient. Her walnut locks were styled straight in an impeccable blow-dry.

Makeup-wise, she donned her trademark smokey-eye, with a dash of eyeliner bringing intensity to her hazelnut gaze.

The Spanish queen did not have a handbag with her as she walked around the event, wearing a sanitary mask on. 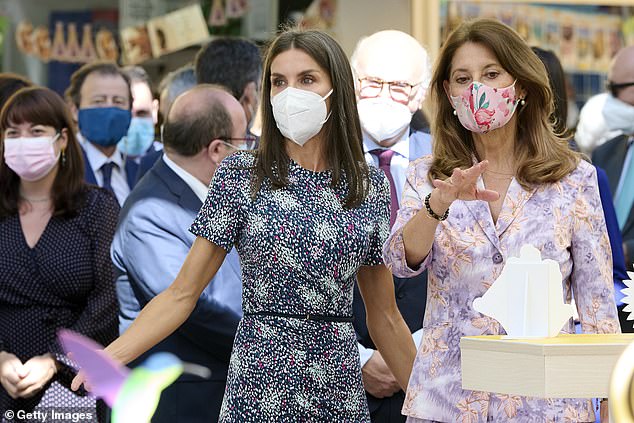 The Queen seemed eager to tour the literary event, where authors, publishers and sellers meet and discuss the future of Spanish literature

Letizia showed interest towards several books during her tour, and stopped at stands to flick through some, asking questions to the sellers and authors who gathered around her.

The Madrid Book fair, which takes place each year in the Spanish capital, was first created in 1933.

It was first organised on the Paseo de Recoletos, but in 1967, it moved to El Retiro Park, where it has taken place since.

The event celebrates reading with events organised throughout its duration involving talks, conferences, workshops and round tables in the different spaces, with authors taking part. 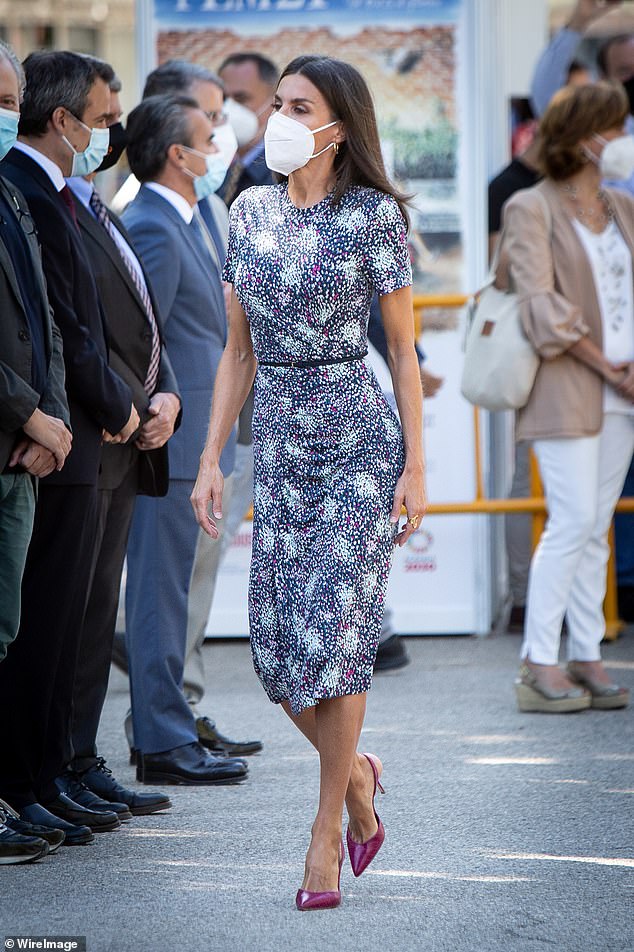 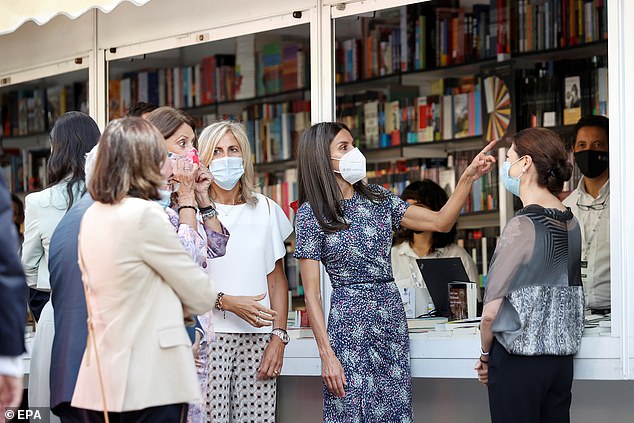 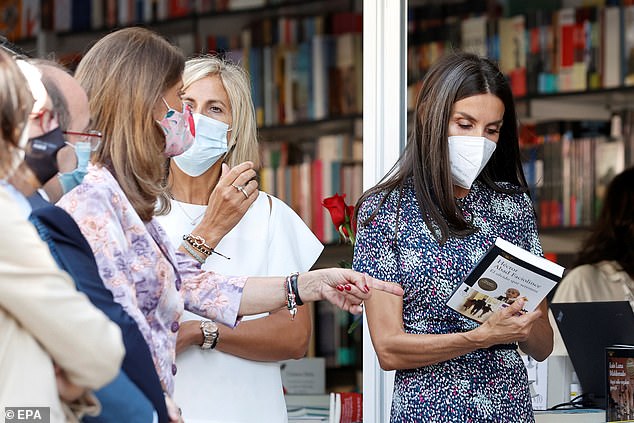 The royal let her dress do the talking and sported a very simple look, but made sure her shoes matched the magenta dots in her dress

It has been a busy week for Letizia, who visited a school on Wednesday, welcomed the Chilean president to Madrid on Tuesday and attended an award ceremony on Monday.

The mother-of-two’s oldest daughter, Princess Leonor, who will inherit the throne from her father Felipe VI, has recently moved to Wales, where she will be studying at the UWC Atlantic College.

Other pupils counts Princess Alexia of the Netherlands, also 15. Both girls have enrolled on a £67,000, two-year course to study for their International Baccalaureate diploma at UWC Atlantic College. 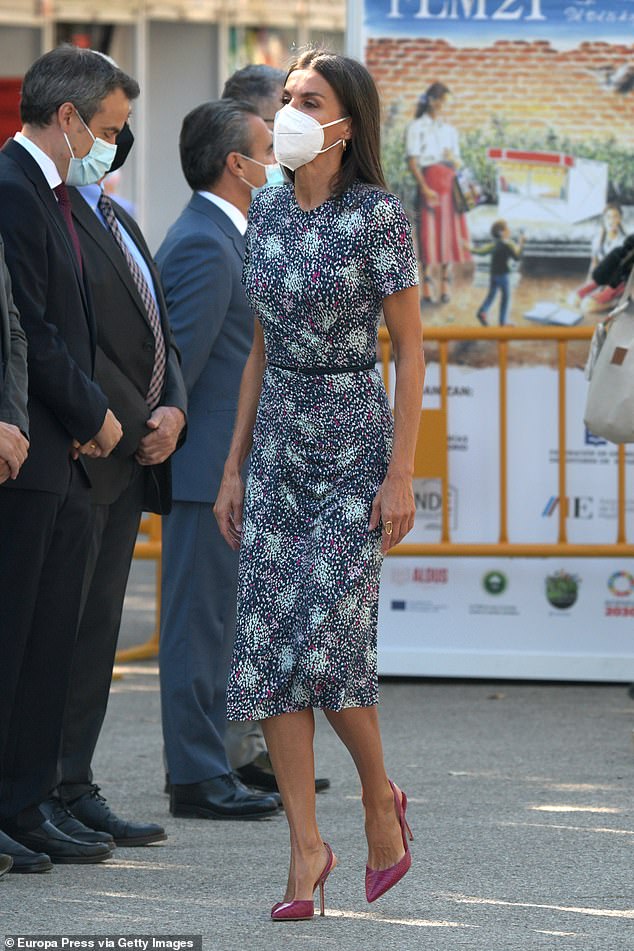 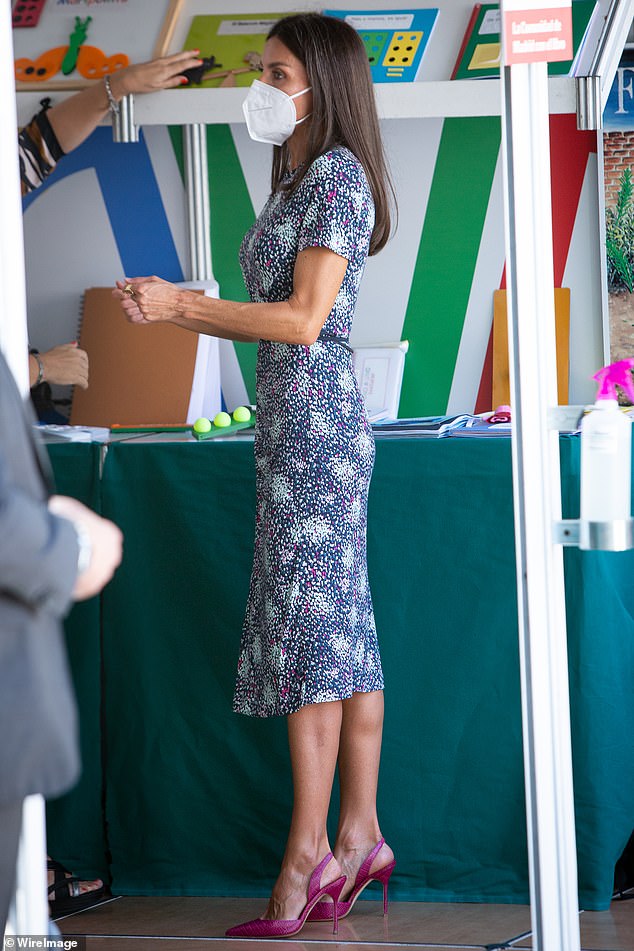 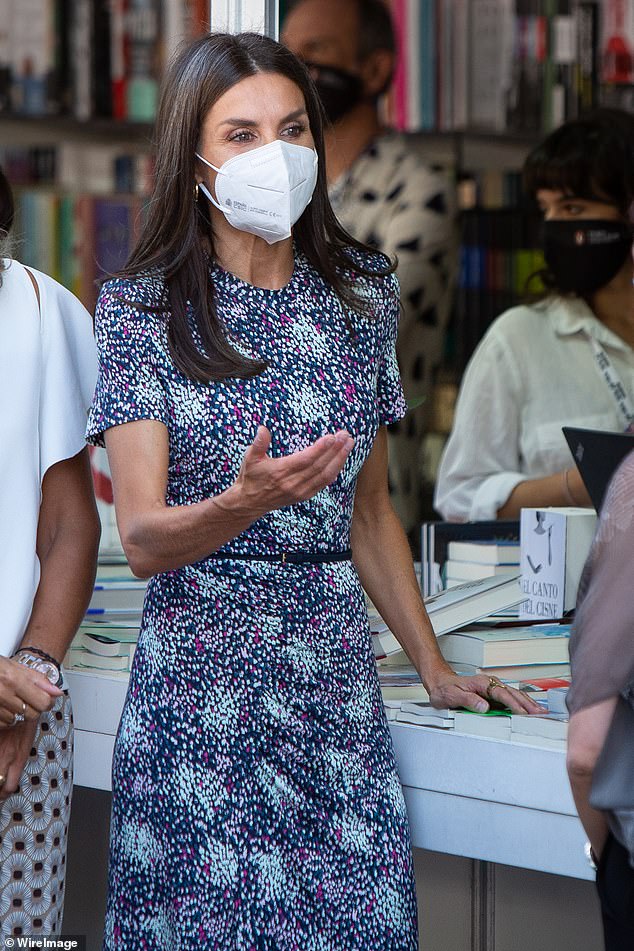 The queen sported little jewellery, apart from a discreet pair of gold hoop earrings, and her favourite ring