Queen Letizia looked elegant as she and King Felipe VI enjoying an evening of music in Madrid last night.

The Queen of Spain, 49, accompanied her husband, 53, to attend the premiere Of The Opera ‘Partenope’ at the city’s Royal Theater.

For the occasion, Letizia donned a £139 black sleeveless top from Hugo Boss with wide-legged trousers from Carolina Herrera, which she paired with black accessories to achieve the glamorous evening-wear look.

A night on the tiles! Letizia Queen of Spain, 49, accompanied her husband Felipe VI, 53, to attend the premiere Of The Opera ‘Partenope’ at Royal Theater in Madrid last night 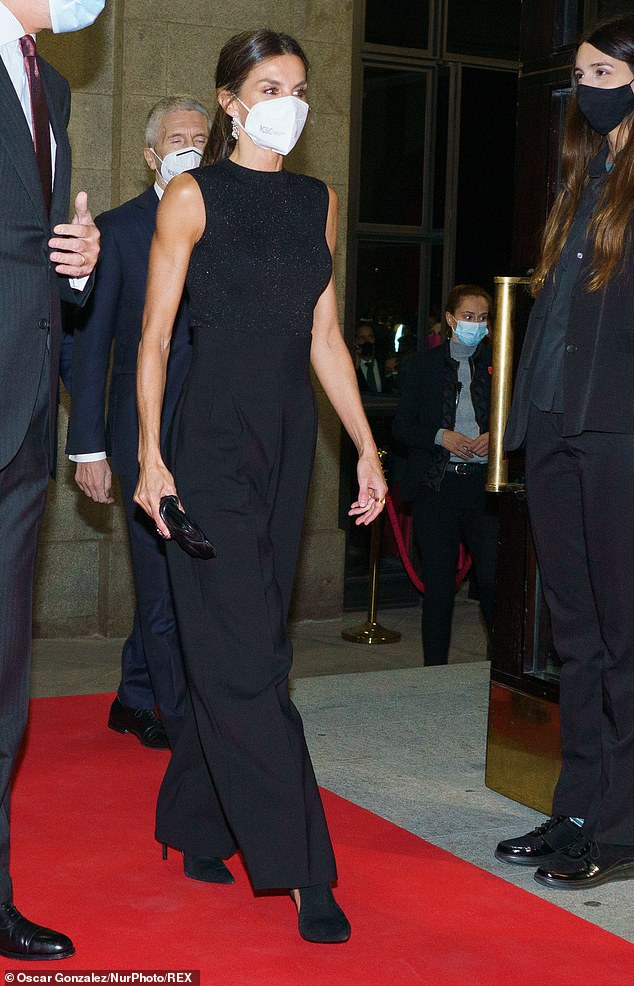 The mother-of-two put on a stylish display with the trendy wide-legged Palazzo trousers from the Spanish designer.

She paired it with a sleeveless top with a high neckline and glittering detail, which she tucked in the trousers to accentuate her petite frame and slender waist.

The stylish royal, who loves to recycle looks, accessorised with a square black clutch bag from Tod’s that she’s owned since 2007, and matching suede black pumps from Magrit that she first wore in 2018.

Letizia kept the look simple by wearing discreet jewellery, with a pair of gold drop earrings from Yanes and her favourite ring from Karen Hallam. 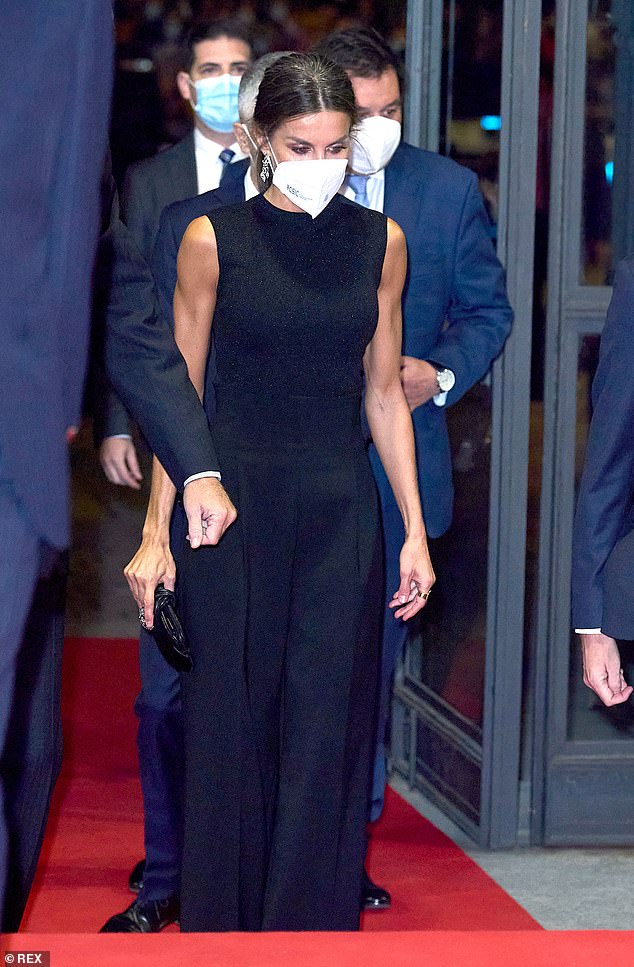 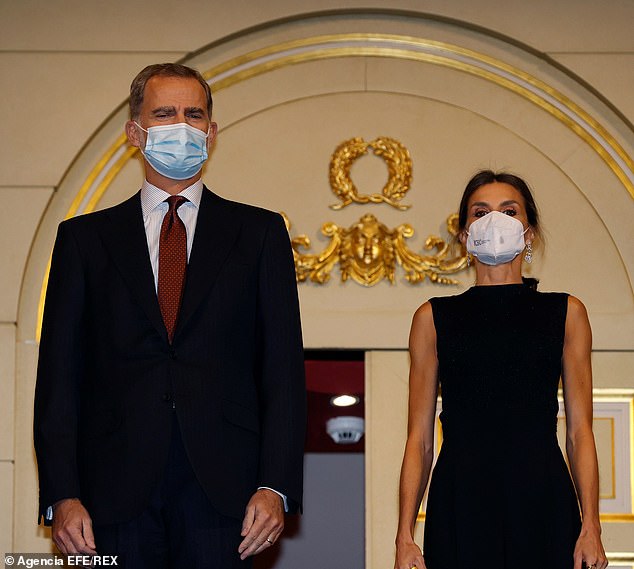 Spanish style: Felipe VI, dressed in a black suit, and Letizia, cut a stylish pair for their date night

Her brown locks were styled in a low ponytail and a dash of eyeliner brought the drama to her eyes, accentuating her hazelnut gaze with a hint of mascara and eye-shadow.

Meanwhile, King Felipe VI looked smart in a pin-striped black suit and white shirt, which he paired with a dotted red tie.

The couple looked relaxed as they stepped out for a night of music in the Spanish capital.

Partenope, which premiered in London at the King’s Theater in 1730, is one of Handel’s only humourous pieces.

The three-act opera tells the  story of four rival suitors in pursuit of Queen Partenope’s love. 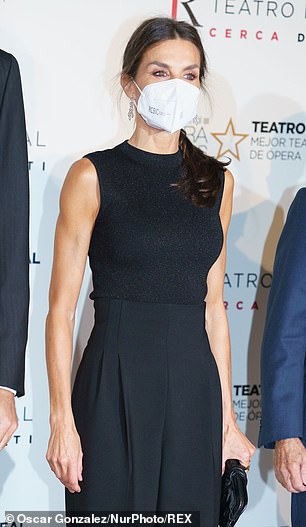 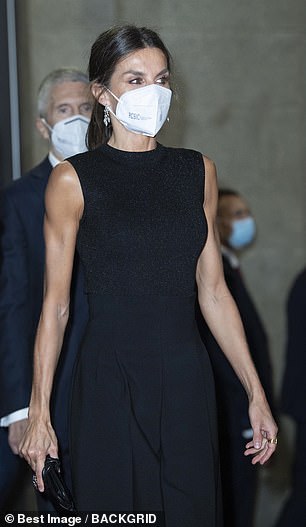 The Spanish Queen’s bag was a small square clutch from Tod’s, pictured, left. She was also wearing beautiful drop earrings from Yanes 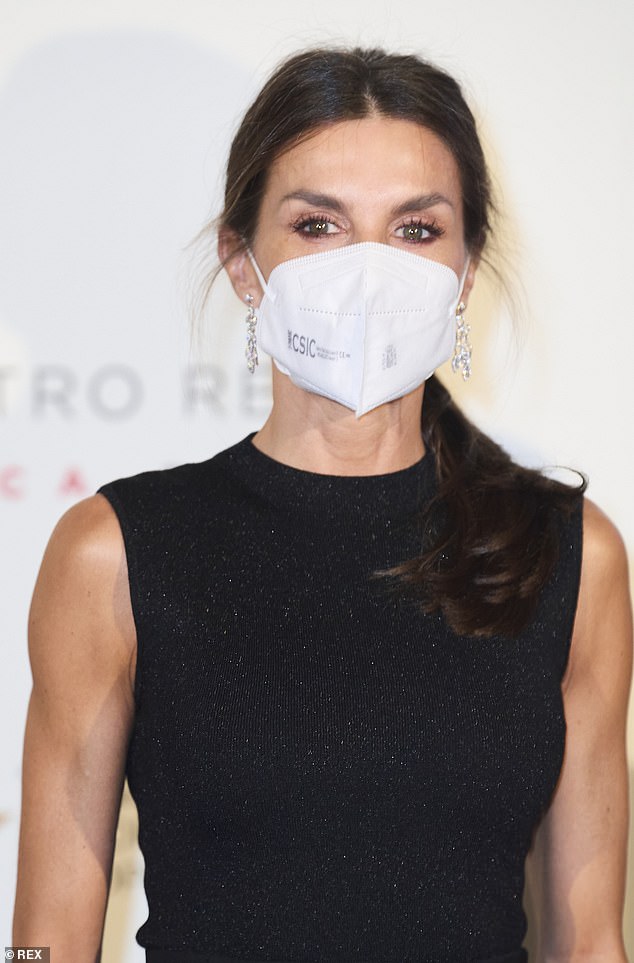 The mother-of-two styled her hair in a low ponytail, and brought the drama above her mask with sultry eye makeup, pictured 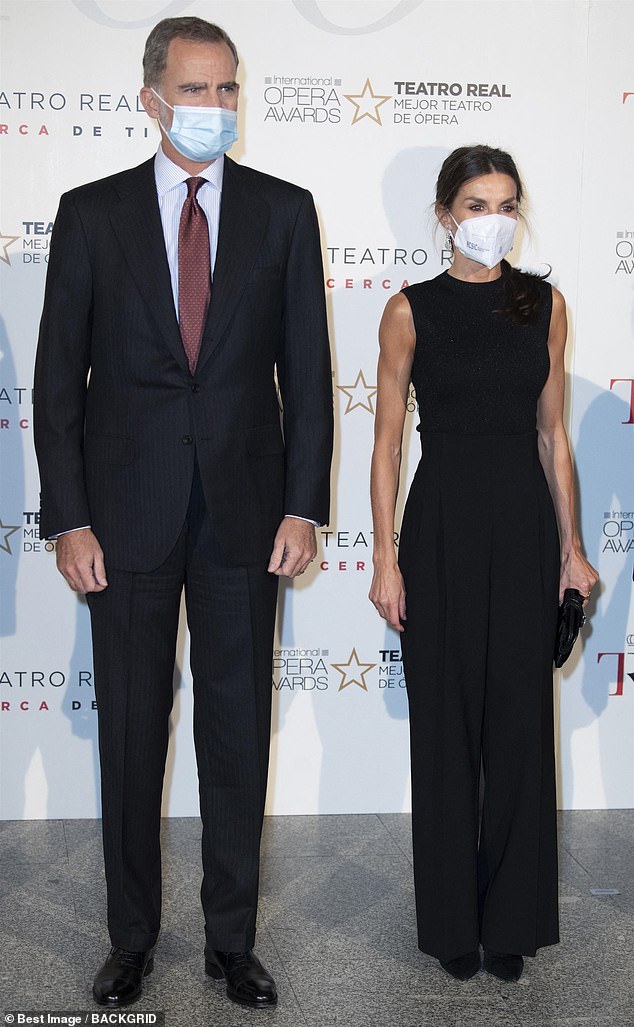 Not to be outdone, Felipe looked sharp in his black suit, which he paired with a white shirt and a dotted red tie, pictured