Queen Letizia of Spain is known for recycling some of her most successful style combinations, and sported a particularly winning look to open a hospital today.

The Spanish royal, 48, accompanied her husband King Felipe VI, 52, to Toledo, where they opened the new university hospital in the autonomous community of Castilla–La Mancha.

For the occasion, Letizia donned a grey skirt suit with blue embroidery, which she debuted in 2017 on Spain’s National Day.

The mother-of-two looked effortlessly stylish during the event, where she met local officials, toured the premises with Felipe VI and unveiled a plaque commemorating the opening. 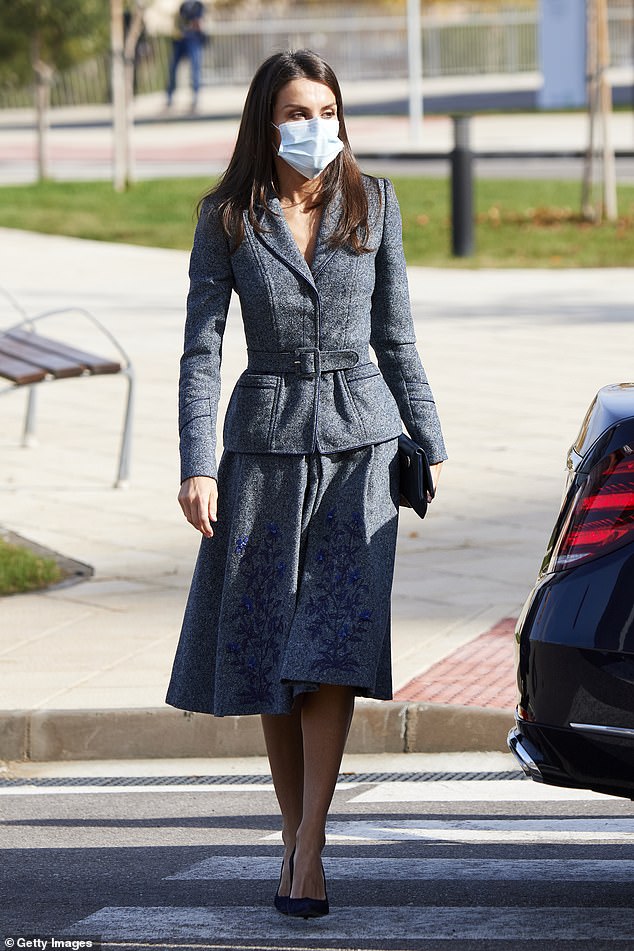 Queen Letizia, 48, looked elegant in a recycled skirt suit as she accompanied King Felipe VI of Spain, 52, to Toledo to open a hospital 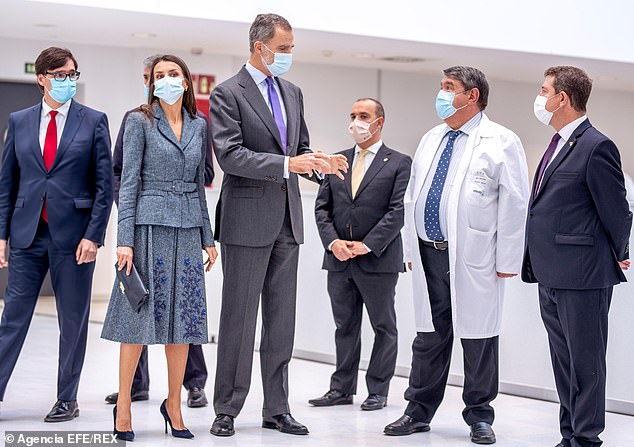 It’s no surprise the smart grey skirt suit is a favourite with the royal, thanks to the waist-cinching belt that accentuates her trim figure and a flattering A-line skirt that falls just below the knee.

Her accessories were also understated, with the Spanish monarch sporting little jewellery, apart from a favourite ring.

She sported a pair of black stilettos, which matched the clutch bag she kept in her hand during the visit. 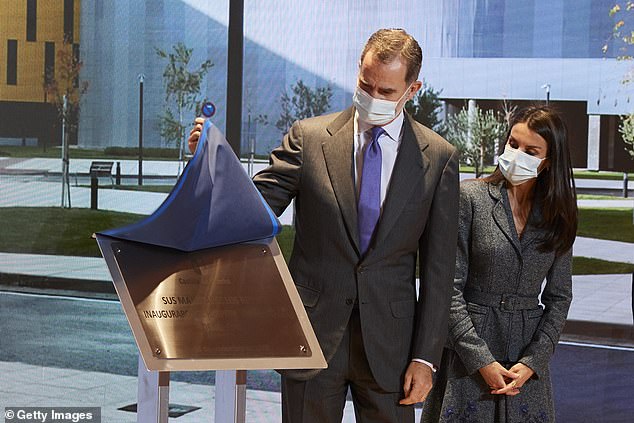 During the event, King Felipe VI, who was wearing a stylish dark grey suit, unveiled a plaque to commemorate the opening of the hospital 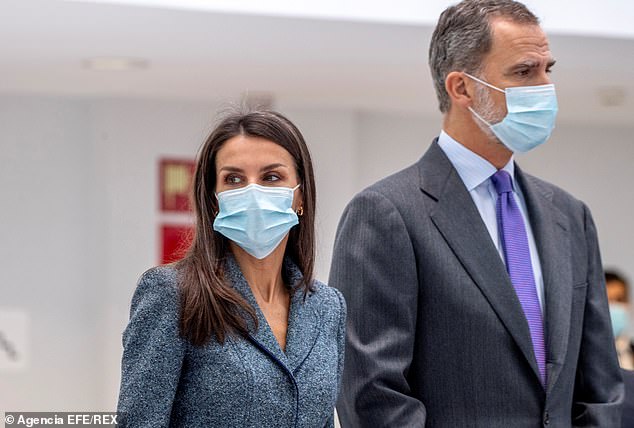 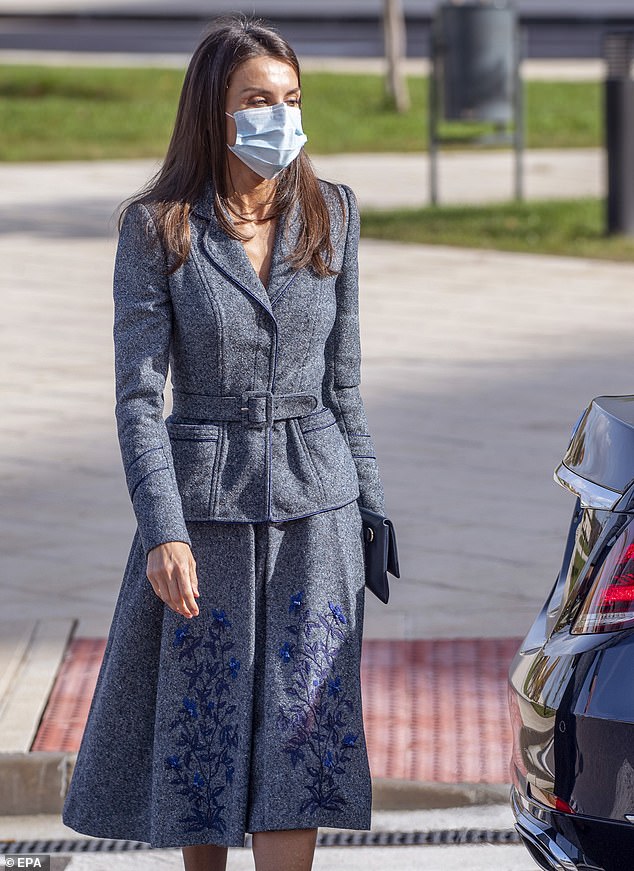 Letizia looked stylish in the skirt suit, which was tied at the waist with a woolen belt which accentuated her trim figure 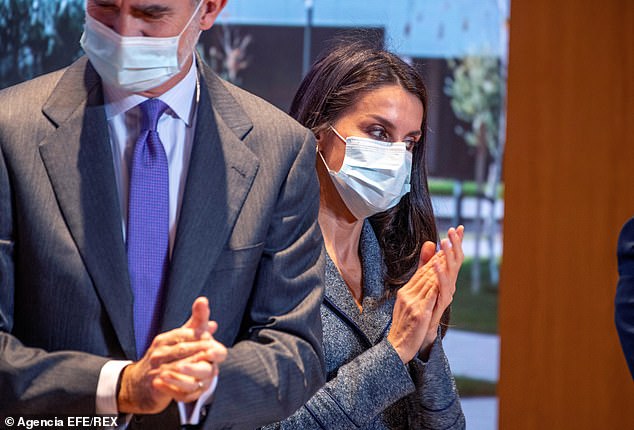 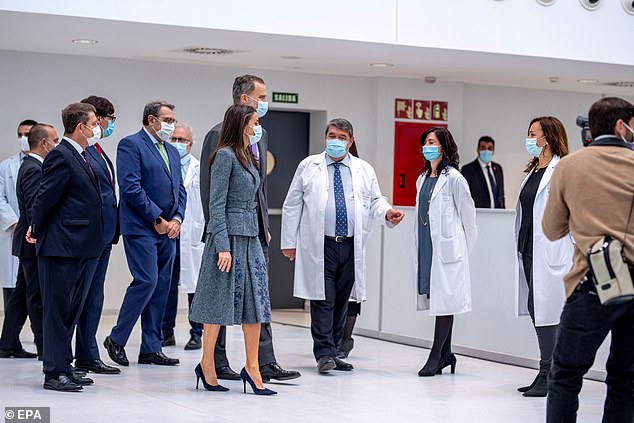 Her chestnut locks bounced on her shoulders in an impeccable blow-dry, with honey highlights warming up her hair colour.

The royal’s makeup was also discreet, with just a dash of eyes-shadow and mascara to bring out the colour of her eyes.

She was wearing a mask, in keeping with Spain’s safety guidelines to curb the spread of the coronavirus. 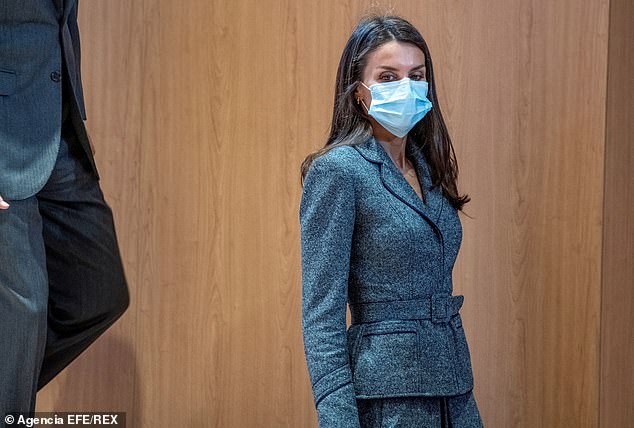 Letizia looked effortlessly stylish this morning, with a natural make-up putting the focus on her eyes 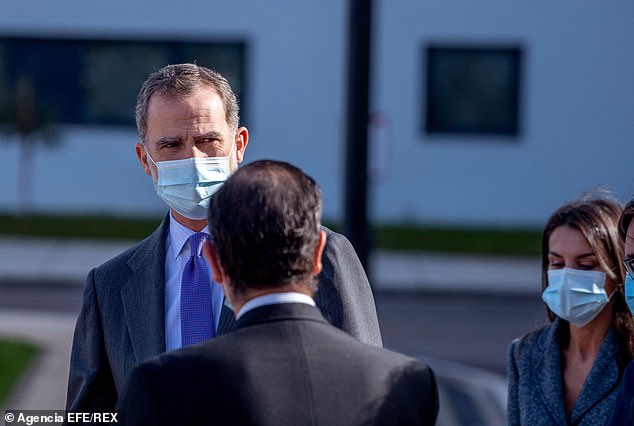 King Felipe VI, who had opted for a dark suit and white shirt, added a pop of colour to his outfit with a light purple tie

The Spanish monarchs (centre), posed for a picture with Spani’s Health Minister Salvador Illa (third right) and other officials in attendance 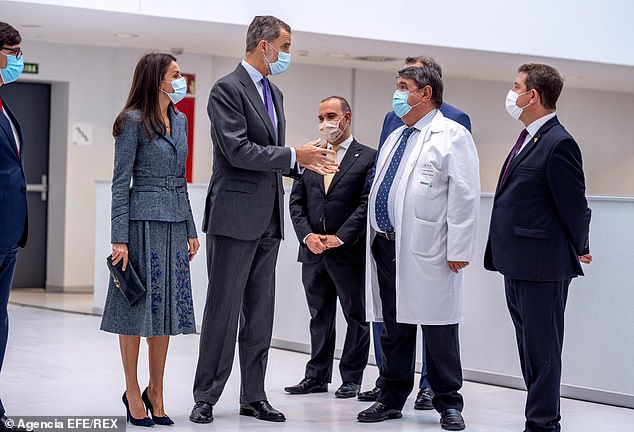 Felipe VI looked as stylish as his wife in a dark grey suit and crisp white shirt. He added a pop of colour with a purple dotted tie, and was also wearing a face covering.

The elegant couple made their way to Toledo’s new university hospital this morning to mark its formal opening.

They were joined by many local officials, including Spain’s Health Minister Salvador Illa, and respected social distancing guidance, before touring the premises.

The mayor of Toledo, Milagros Tolón, welcomed the monarchs in his city with open arms.

Following the opening, equipment will be transferred from nearby hospitals to the new University Hospital’s premises to benefit the quality of care received by patients of the Castilla–La Mancha autonomous community.