Queen Maxima of the Netherlands dazzled in a colourful look during the second day of her state visit to Norway.

The Dutch royal, 50, and her husband King Willem-Alexander, 54, hopped from one event to another during a day packed with engagements in Oslo today.

The monarch opted for a midnight blue and orange cape, which she wore over a glittery striped dress in the same colours for a lunch at Fort Akershus.

The day culminated with a reception hosted by the royal couple at the navy ship Zr.Ms. Rotterdam in the Oslo harbour.

Queen Maxima of the Netherlands, 50, pictured, dazzled in a bi-colour look during the second day of her state visit to Oslo with King William-Alexander, 54

Maxima looked a picture of elegance in the coat, which mimicked the colours of the sky, with the midnight blue hue fading into a warm orange halfway through its fabric.

The midi-dress, with a boat neckline was cinched at the waist, highlighting Maxima’s svelte figure.

The mother-of-three paired it with orange gloves and orange suede heels and a small fascinator in blue and gold, matching the dress’ fabric. 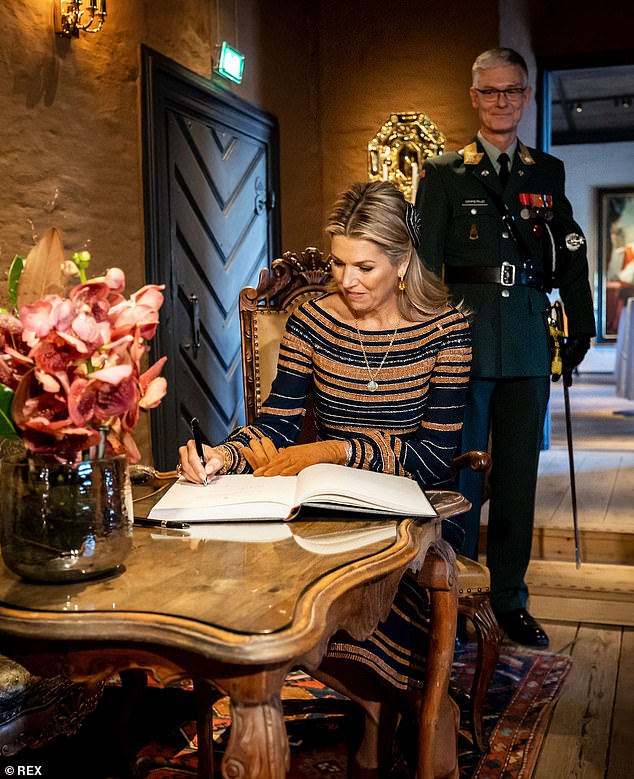 Underneath the cape, the Dutch monarch was wearing a sparkly dress with blue, orange and gold stripes as she signed the visitors book during a government lunch at Fort Akershus in Oslo

She was also carried small orange clutch bag to carry her essentials.

Known for her love of accessories, Maxima picked a bracelet made of amber and a pair of gold drop earrings with an amber gem and a matching ring.

For a busy day of engagements, Maxima looked picture-perfect, with a dash of bronzer highlighting her healthy glow. 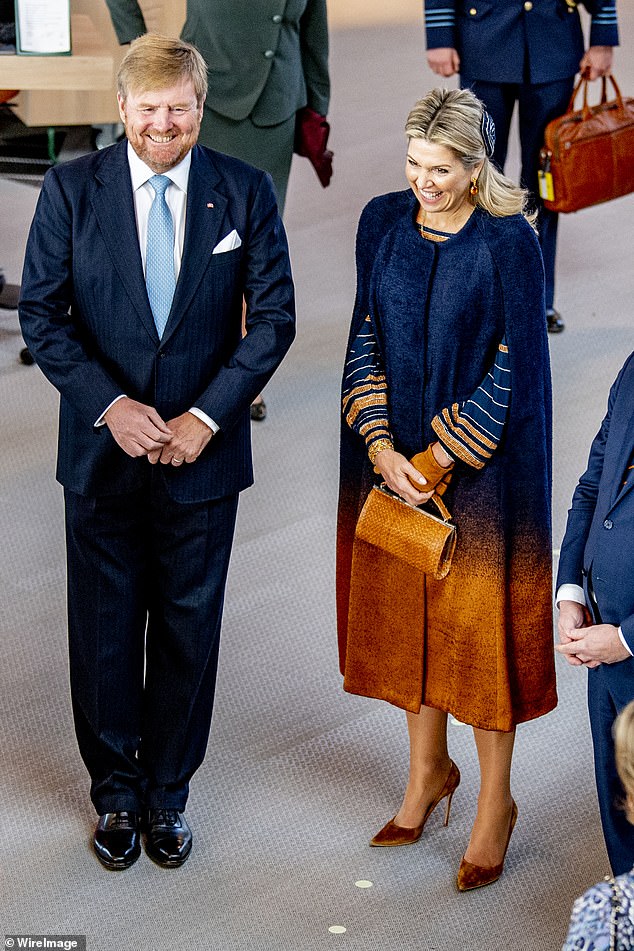 The mother-of-three looked glamourous, with mascara enhancing her naturally long eyelashes and a warm hazelnut eyeshadow lifting the sparkle in her eye, with a nude lipstick.

The couple kickstarted the day meeting the Norwegian Prime Minister Jonas Store at the residence of the commander of the armed forces.

They then attended a seminar about human rights, fighting hate speech and freedom of expression at the Deichman Library.

The day culminated with a reception held by Maxima and Willem-Alexander for the Dutch community at the navy ship Zr.Ms. Rotterdam in Olso’s harbour. 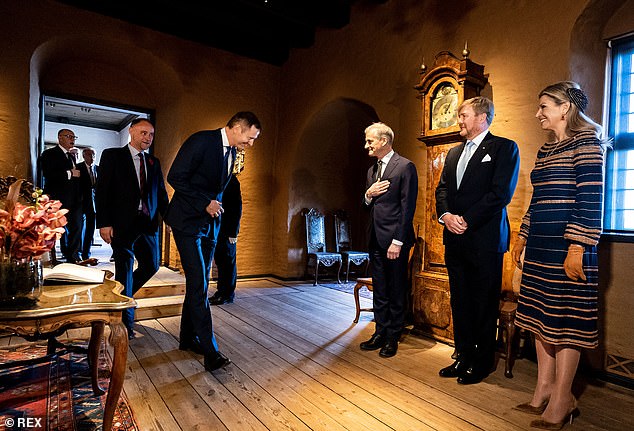 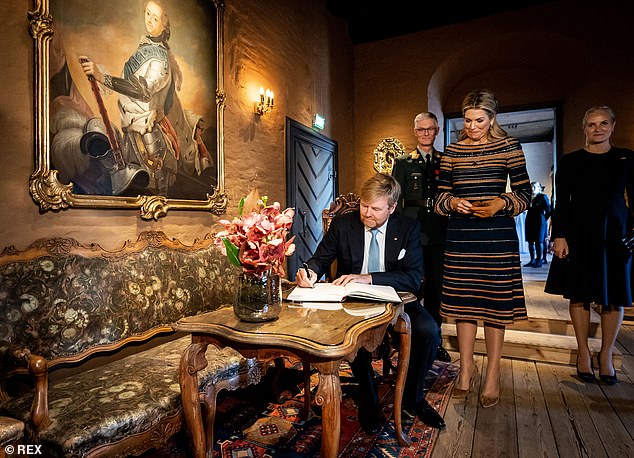 In another fashion tour-de-force, Maxima looked breathtaking as she and King Willem-Alexander attended a gala dinner with the Norwegian royal family at the Royal Palace in Oslo yesterday.

The mother-of-three and her husband began a whirlwind three day trip to visit the country earlier that day, and were spotted stepping off the plane at Oslo Gardermoen airport yesterday morning.

And yesterday evening the royals looked dazzling as they arrived at gala dinner at the Royal Palace, with Queen Maxima walking into the event arm-in-arm with the Norwegian King Harold, 84.

Maxima was elegant in a glittering floor-length gown that transitioned from a dark navy to a pearl blue.

The pair were also joined at the event by  King Willem-Alexander, as well as members of the Norwegian royal family including Queen Sonja, Crown Princess Mette-Marit and Princess Martha Louise of Norway. 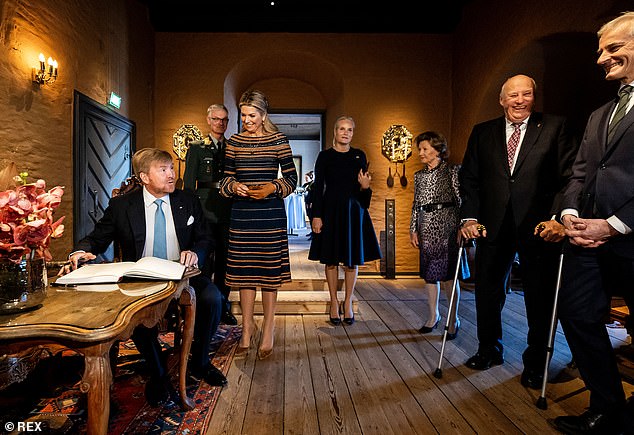 King Harald and Queen Sonja joined the Dutch royals for lunch, alongside their daughter Princess Mette-Marit 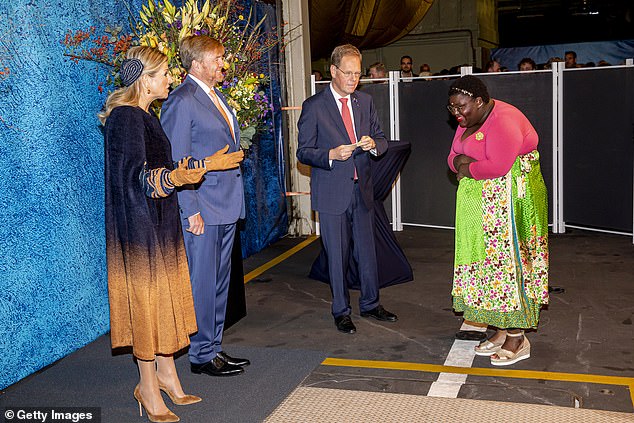 This evening, Maxima and Willem-Alexander hosted a reception Dutch community at the navy ship Zr.Ms. Rotterdam in the harbour