It might be cold and damp in The Hague today, but Queen Maxima of the Netherlands brought a splash of sunshine in her vibrant yellow suit.

The mother-of-three, 51, attended a talk on social media’s influence on the mental health of young people, organised by the MIND Us organisation.

Maxima braved the Dutch rain to attend the conference, flashing a typically warm grin to royal fans who had come to greet us as she made it to the event.

Queen Maxima of the Netherlands, 51, attended a talk on social media’s influence on the mental health of young people, organised by the MIND Us organisation 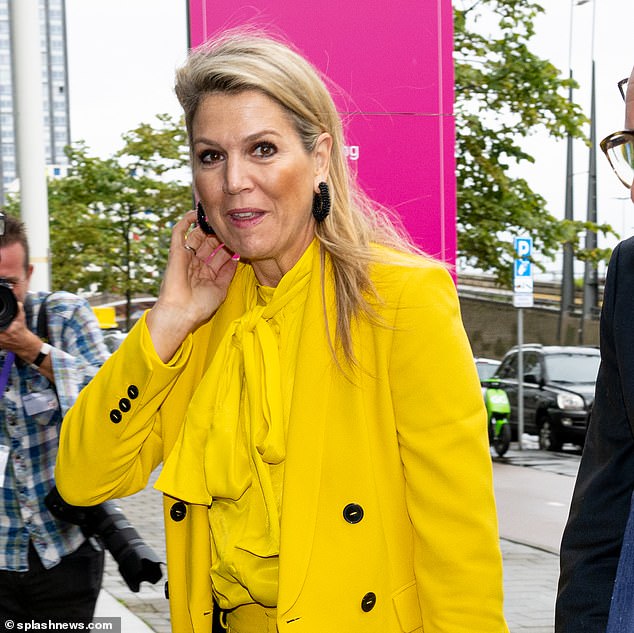 The Dutch royal went for a bold look and went for head-to-toe yellow, matching the pussy bow silky blouse she wore to the sunny tone of her tailored suit.

She completed the outfit with leather black stilettos and a baguette clutch of the same colour, which matched the inside and the buttons of her yellow blazer.

She sported a strong eye makeup with a thick trait of eyeliner and ochre eyeshadow, which complimented her hazelnut gaze. 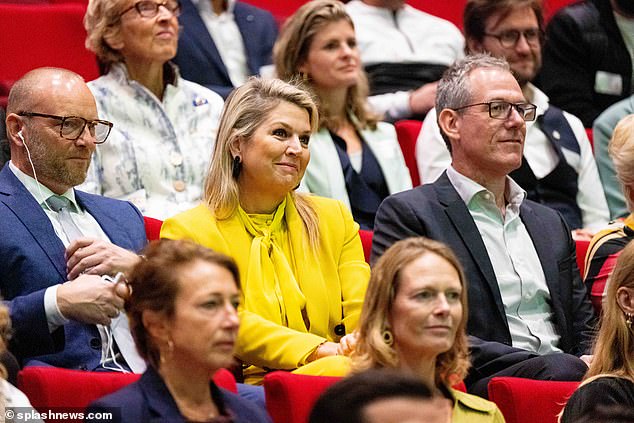 The mother-of-three smiled with her typical warmth as she listened to the talk, which discussed how social media influences young people’s mental health 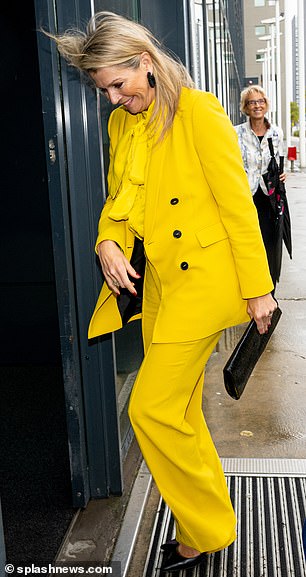 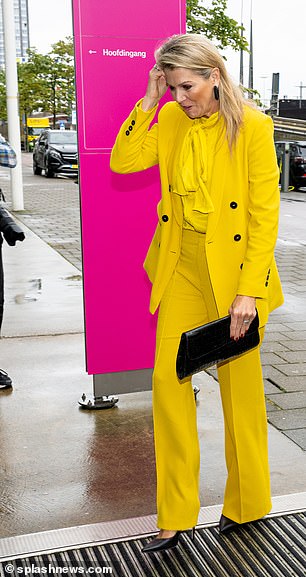 The mother-of-three pulled off the vibrant looked and flashed a grin as she arrived at the event, a lock of her hair catching in the September breeze. She looked very elegant in the outfit 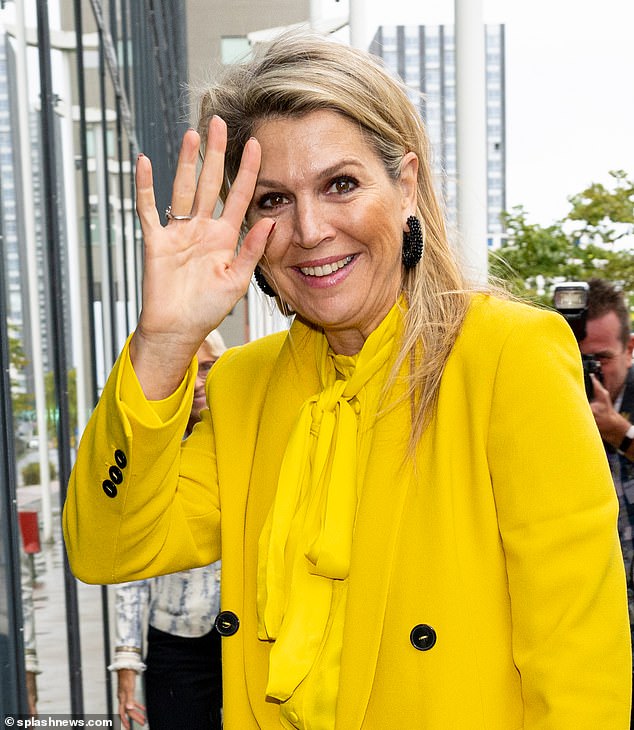 Maxima sported black accessories, including black earrings, pictured, to match the buttons and the lining of her yellow blazer

A touch of bronzer added a sun-kissed halo to her healthy glow, and her blonde highlights were styled straight and tucked behind her ears as she escaped the unforgiving September chill and entered the building.

Maxima and her husband King Willem-Alexander have returned to their royal duties this month following their royal break, and have enjoyed a busy couple of weeks.

The couple were in London last Monday on the sad occasion of Her Majesty The Queen Elizabeth’s II’s funeral at Westminster Abbey and Windsor Castle.

After returning from London, The Dutch royals attended Budget Day, known as Prinsjesdag in Dutch, at The Hague, to mark the new government year. 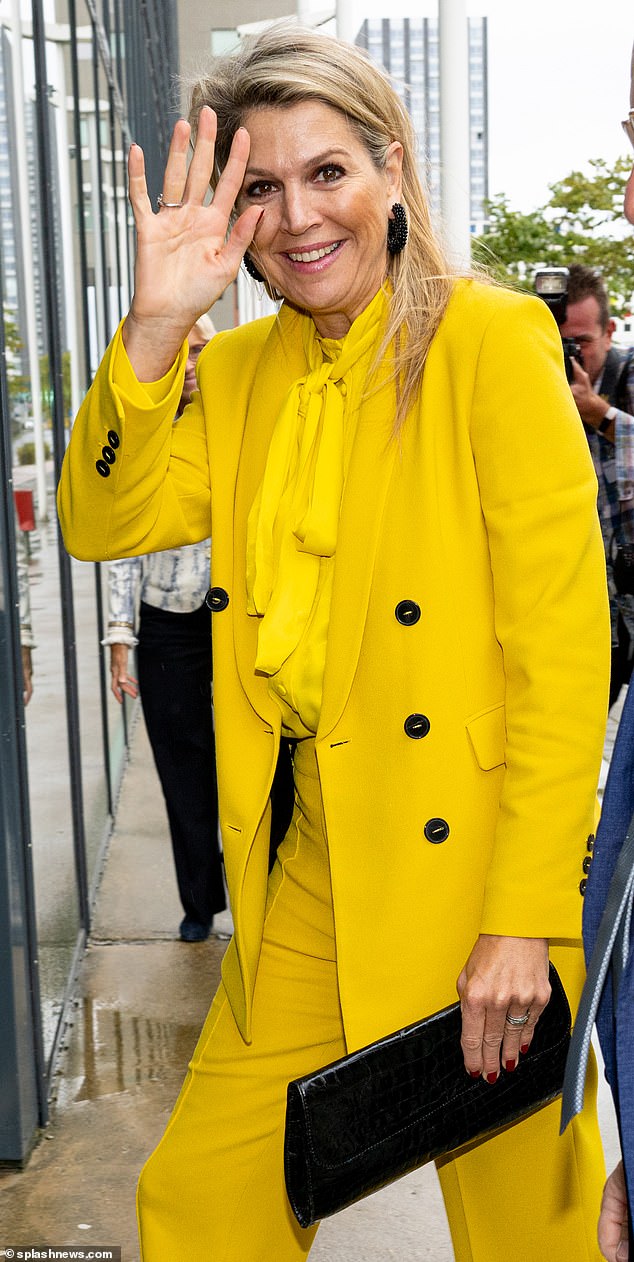 The Dutch Queen sported a glamourous makeup with a heavy trait of eyeliner and a pink lip. Her nail were also painted red

After looking solemn in black during her appearances in London at the ‘reception of the century’ at Buckingham Palace on Sunday and the state funeral on Monday, Queen Máxima, 51, looked professional and elegant in a grey wrap dress and matching hat.

The King and Queen’s daughter, Crown Princess Catharina-Amalia, 18, looked radiant in a flowing emerald maxi dress, clinched at the waist.

The laid-back princess seemed to champion the high street in the gown, which appeared to be an £86 flowing number from ASOS.

Wearing her blonde tresses down, she accessorised with diamond and emerald earrings, a necklace and a ring, while carrying a gold embellished clutch bag.

Both mother and daughter also wore the Dutch royal sash and star, which is orange and blue to symbolise the union between the Houses of Orange and Nassau.

The young princess and heir to the throne will be starting her degree at the University of Amsterdam soon – and the Dutch Royal Family announced in May she will live in student accommodation with her peers.

She will be studying politics, psychology, law and economics.

As part of Budget Day, King Willem-Alexander, 55, gives a speech from the throne in the Shouwburg. This year’s Budget Day will see people gathering in The Hague for the first time since 2019 after two years of coronavirus restrictions.

The royal family waved from a horse-drawn carriage as they took part in the royal procession from Noordeinde Palace to the Koninklijke Schouwburg.