‘Let’s recognise all the journalists and broadcasters working to keep us informed’: Queen pays glowing tribute to media as she thanks newspapers for using their platform to help others during Covid crisis

The Queen, above, has paid a glowing tribute to the media after thanking newspapers in a series of tweets for using their platform to help others during the coronavirus crisis

The Queen has paid a glowing tribute to the media as she thanked newspapers for using their platform to help others during the coronavirus crisis.

This afternoon, The Royal Family’s official Twitter account posted: ‘This #ThankfulThursday, let’s recognise all of the journalists and broadcasters working to keep us informed.

‘From the national titles and broadcasters, to the local and regional outlets making a difference to the communities they serve – #ThankYou’.

It comes as part of a campaign called ‘Thankful Thursday’, which spreads positivity amid the lockdown through expressing gratitude for others.

The account retweeted a post from the Journalists’ Charity, which offers guidance and support to reporters across the UK.

The charity wrote: ‘Journalists are working tirelessly to keep you up to date on #COVID19 when many are facing an uncertain future.’

In a separate tweet, The Royal Family further explained: ‘The Queen is Patron of @JournoCharity, who provide financial advice & assistance to journalists nationwide.

One of the tweets from The Royal Family’s official Twitter account, which says: ‘Let’s recognise all of the journalists and broadcasters working to keep us informed’ 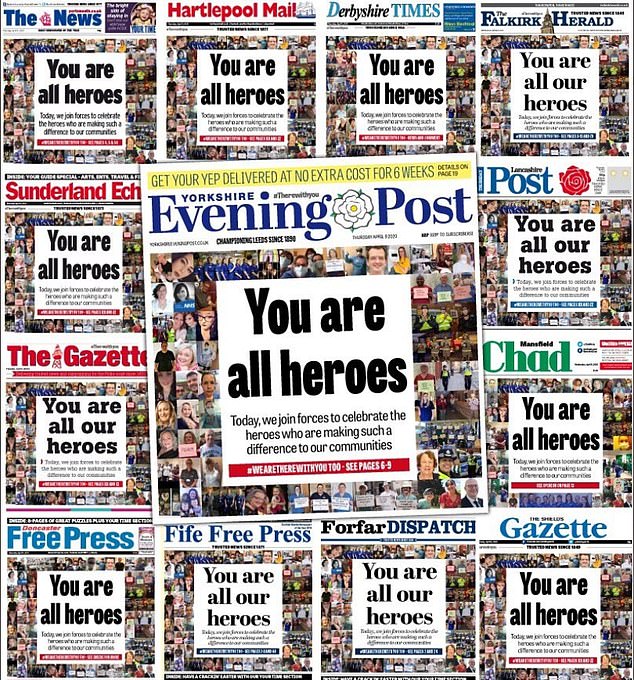 She thanked newspapers in a series of tweets for using their platform to help others during the pandemic. It comes as part of a campaign called ‘Thankful Thursday’, which spreads gratitude

‘Lockdown without Journalism? Unthinkable.’ aims to showcase the role of journalists during the Covid-19 crisis, as they face an uncertain future.’

The Twitter account added: ‘#ThankYou to the local newspapers using their platform to help others, from fundraising to distributing supplies.

‘The Evening Express have backed a campaign to provide NHS Grampian workers with comfort boxes – more than 600 have been given to staff on the front-line so far.’

The Queen and Royal Family also praised frontline NHS workers for their role in the crisis, saying they have been the ‘focus of countless front pages in recent weeks’. 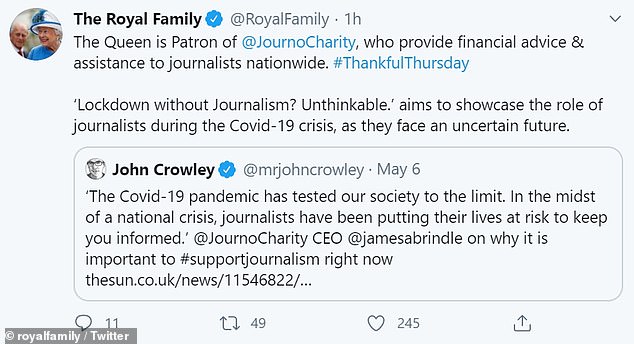 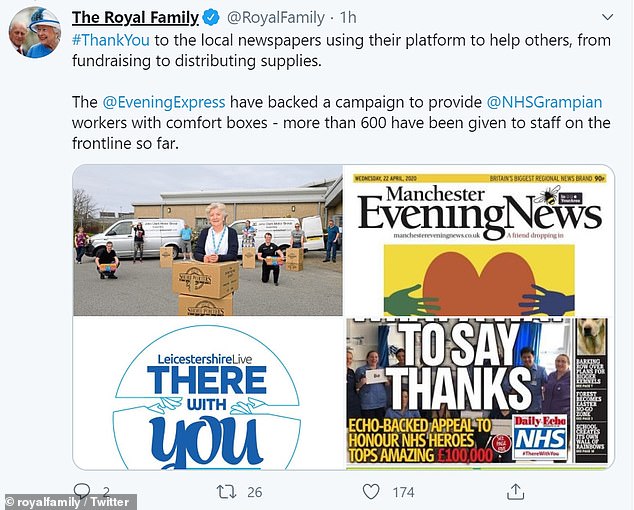 Two other tweets posted by The Royal Family’s social media account this afternoon, above. The Queen is patron of the Journalists’ Charity, which provides support to reporters in the UK

It comes ahead of Britain’s seventh weekly ‘Clap Our Carers’, which shows thanks for the thousands of staff and healthcare workers putting their lives on the line to fight the virus.

Millions of Britons up and down the country step onto their doorsteps, balconies and front gardens to applaud frontline workers at 8pm every Thursday.

Last week the Prime Minister clapped on the steps of 10 Downing Street just hours after claiming the UK is ‘past the peak’ of the virus and on a ‘downward slope’.

Meanwhile, Boris Johnson told ministers today the Government will proceed with ‘maximum caution’ when it comes to easing the lockdown.

The Prime Minister’s official spokesman told reporters: ‘The social distancing rules remain in place and we would ask everyone to respect them, just as they have so far.’