They’re one of the world’s most glamorous families.

And the Swedish royals certainly didn’t disappoint when they attended a formal dinner on Thursday evening.

King Carl XVI Gustaf, 72, was joined by his wife Queen Silvia, 74, for the lavish event at Stockholm’s Royal Palace.

Also in attendance was their daughter, Crown Princess Victoria, 39, and son Prince Carl Philip, 39, who arrived with their respective spouses, Prince Daniel, 44, and Princess Sofia, 33.

Queen Silvia of Sweden, 74, looked sensational in a floor-sweeping floral gown for a formal dinner with King Carl Gustaf tonight 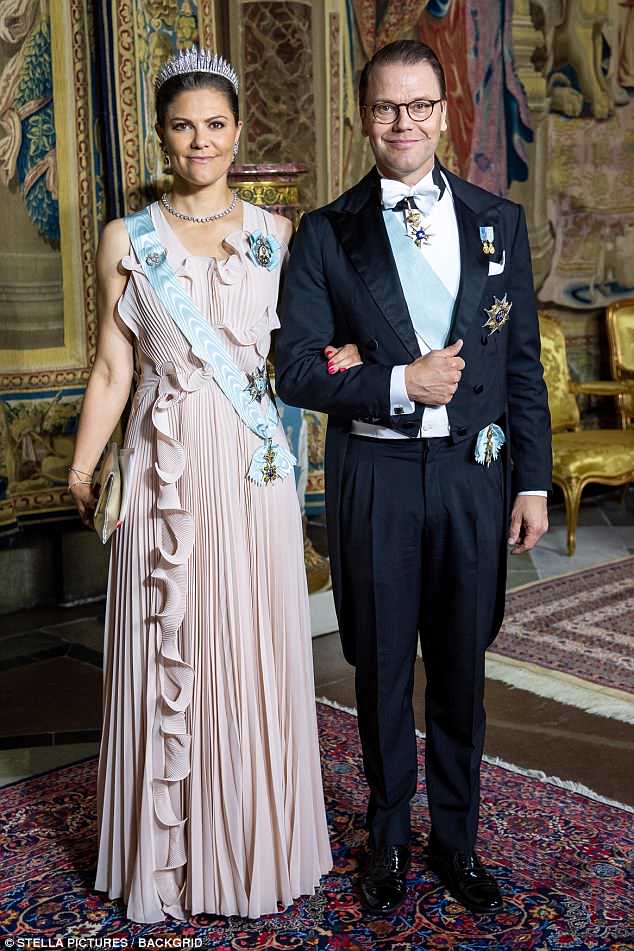 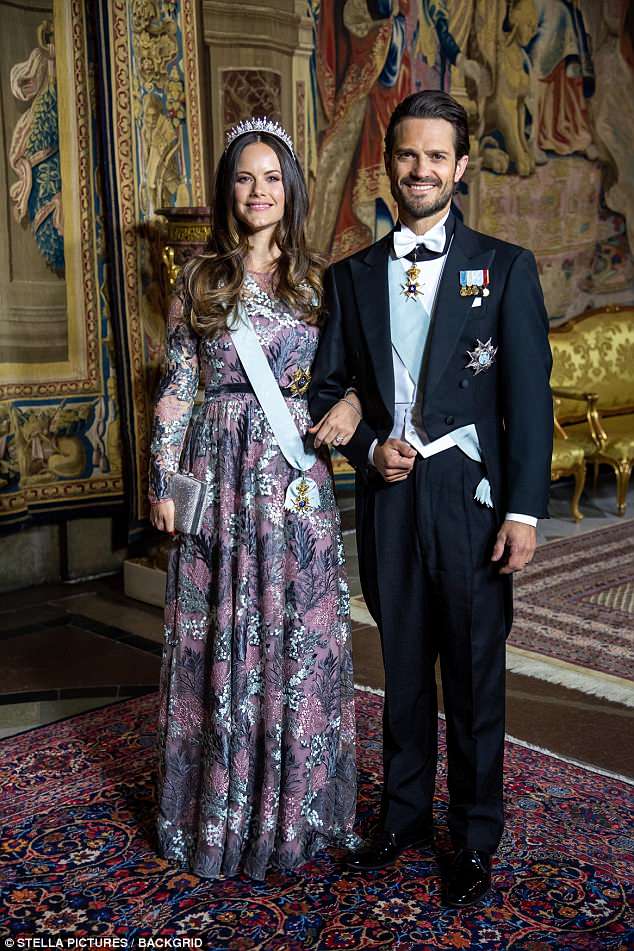 The Swedish queen looked resplendent in a floor-length ballgown with a delicate floral grey pattern.

The gown boasted a sweetheart neckline and revealed a tasteful hint of the queen consort’s décolletage.

It was ruched over the bust and waist, flattering Silvia’s already trim physique.

She was wearing The Connaught Tiara, which she wore on the night before her wedding and was the first she wore in public. 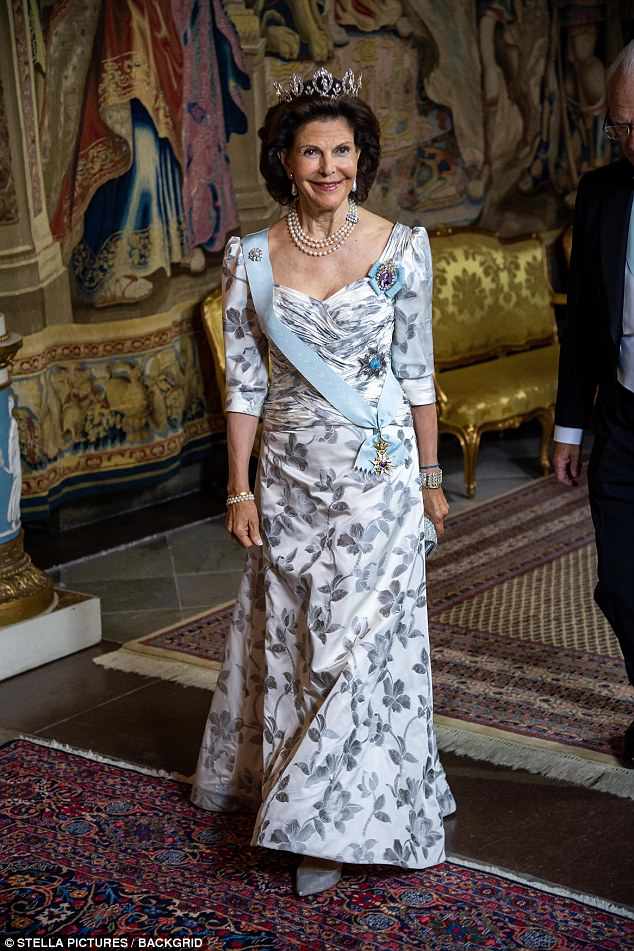 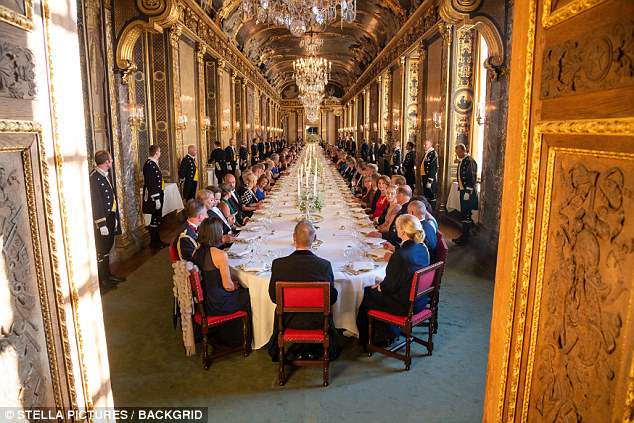 While she has worn it several times in the past is usually worn by other royals, including her daughter Princess Madeleine.

On her wrists Silvia wore several suitably glitzy silver bracelets and donned a triple chain pearl necklace around her neck.

She wore a glamorous pair of pearl earrings and showed just a flash of her grey stilettos under her floor-sweeping gown. 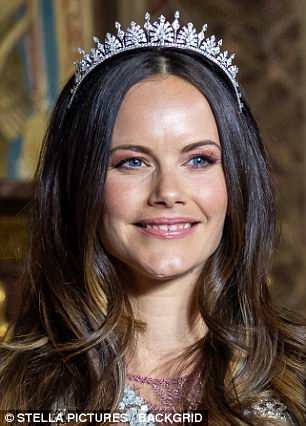 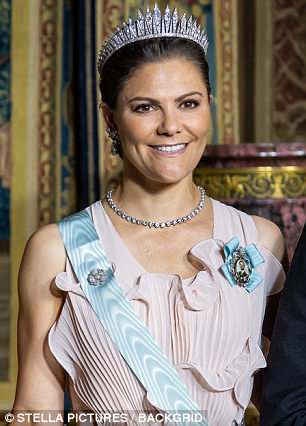 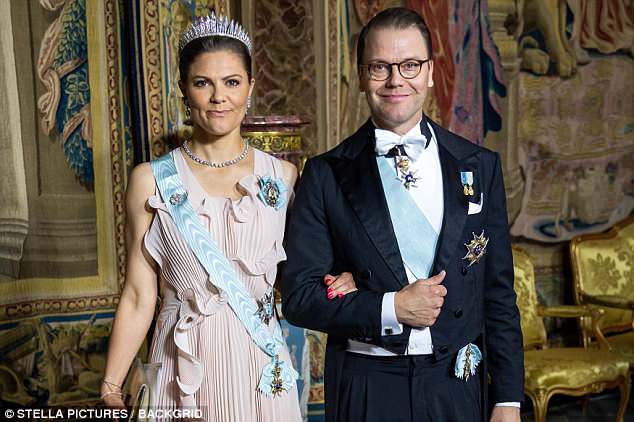 Both Silvia and Carl Gustaf wore regal blue sashes for the formal occasion, while the king wore several medals pinned to his suit.

She carried a stylish golden clutch bag and flashed a coat of bright pink polish on her nails. 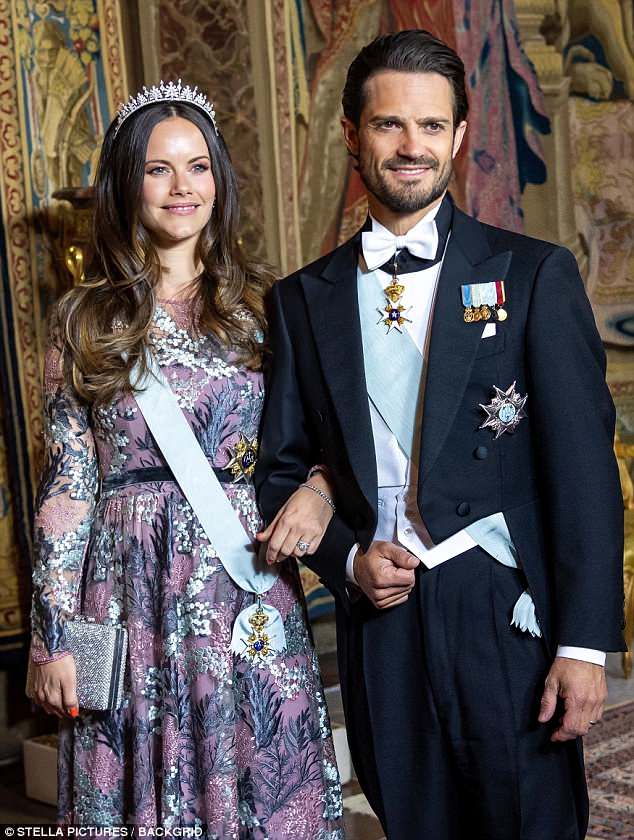 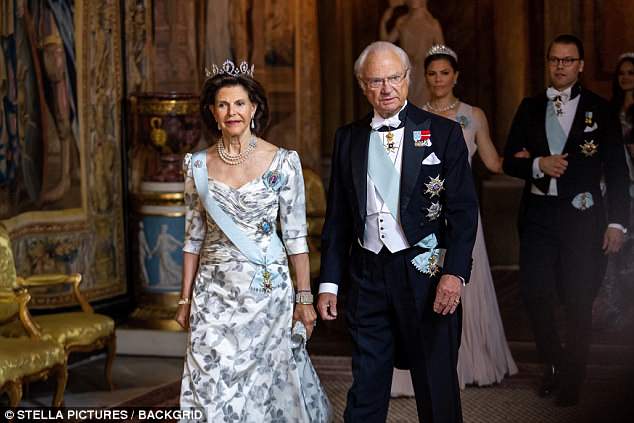 Queen Silvia wore The Connaught Tiara, which she wore on the night before her wedding and was the first she wore in public

The dress was also floor-length for the formal occasion but featured a slightly daring sheer material on the arms and chest.

Earlier today the monarch stepped out with his daughter and heir apparent Crown Princess Victoria. 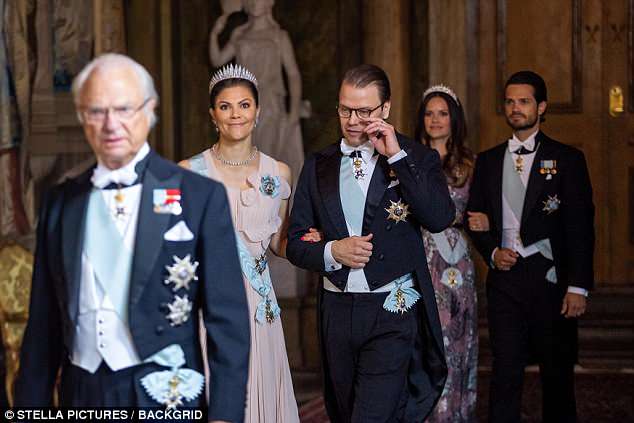 This was the second engagement of the day for the monarch and his heir, who attended a charity lunch together 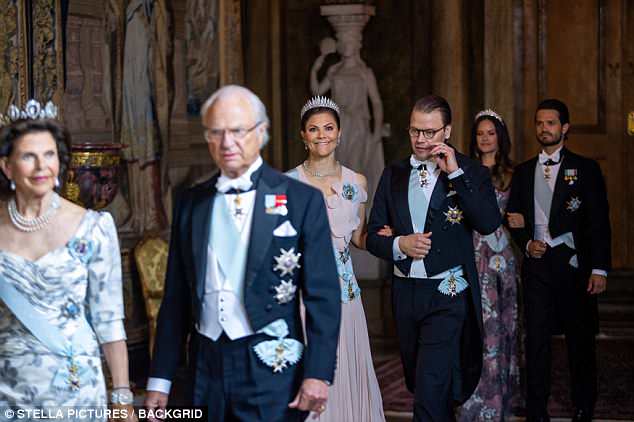 The royals led members of the World Wildlife Fund (WWF) into the royal family’s private residence Drottningholm Palace for their annual lunch together.

King Carl Gustaf, who is the second-longest reigning monarch in Swedish history, took to the throne in 1973 and survived the country’s landmark constitution the following year, and has an active role in public duties, albeit mainly ceremonial.

The King and his wife Silvia, née Sommerlat, have been handing over increasing numbers of engagements to their eldest daughter Victoria in recent years, fuelling speculation that the monarch may abdicate, allowing the Crown Princess to take the throne.