The Queen’s £2million royal barge that led the Diamond Jubilee flotilla down the Thames in 2012 will get a new sumptuous home on the Greenwich peninsula.

The 88-foot-long vessel will be moved from St Katharine Docks in the borough of Tower Hamlets to a boathouse on the Greenwich Peninsula.

It comes as part of a proposal from developer U+I to build the 1,500-home Morden Wharf, for which a planning statement was submitted last month. 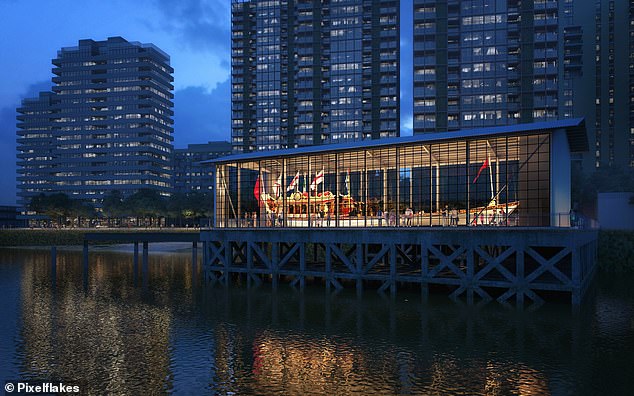 An artist’s impression of the Gloriana boathouse, above, facing east with the Parkside towers in the background, submitted as part of a proposal to build the 1,500-home Morden Wharf 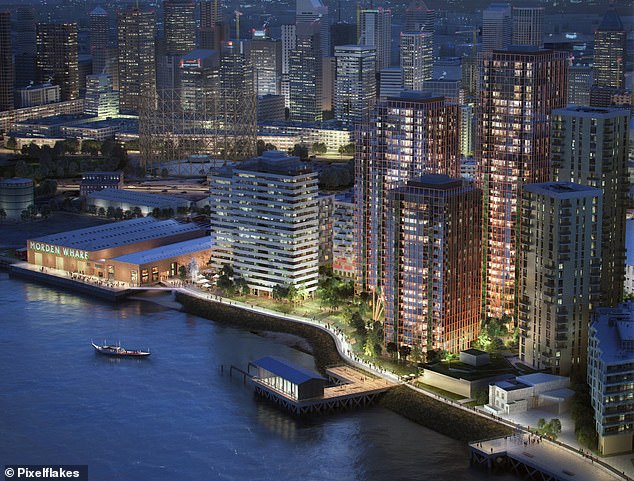 An artist’s impression showing an aerial view of the proposed boathouse. The 88-foot-long vessel will be moved from St Katharine Docks in Tower Hamlets to the Greenwich Peninsula

Gloriana, built with ornately carved wood and decorated with gold leaves, is set to be rehomed on a jetty which is currently unused and restricted from the public.

Canary Wharf, the Isle of Dogs and the Old Royal Navy College can be viewed from the jetty, which is reached from a path running along the Thames.

In the planning application, developers cite ‘significant maintenance costs’ as one of the reasons behind the request to move the barge.

It says: ‘The lack of shelter and protection is causing significant maintenance costs and so a permanent residence is urgently required.’

The document adds: ‘The main function of the boathouse is to provide shelter and adequate storage for when the Gloriana is not in use.

‘The boathouse will also provide space for a programme of continuous maintenance and conservation. When the boat is required for an event, the integrated lifting mechanism allows the boat to be safely transported into and out of the water.’ 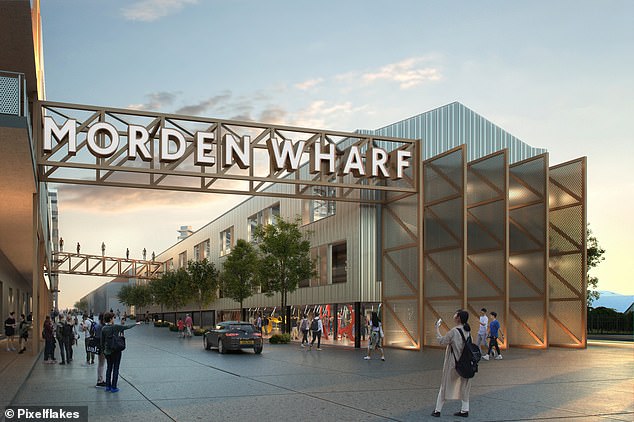 It comes as part of a proposal from developer U+I to build Morden Wharf, artist’s impression above, for which a planning statement was submitted last month 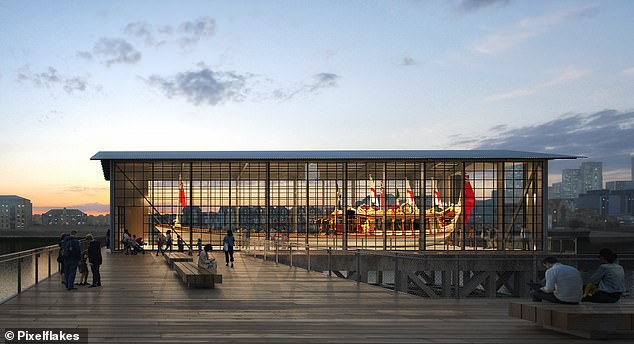 An artist’s impression showing a view from the jetty looking west of the boathouse and the Gloriana. The jetty is currently unused and restricted from the public 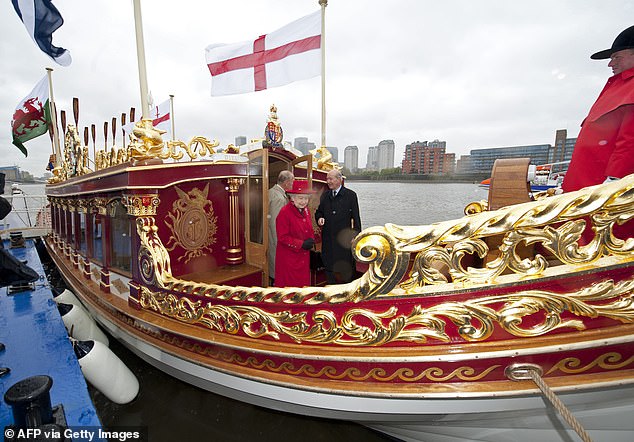 The Queen pictured visiting the Gloriana. The 88-foot-long barge will be moved from St Katharine Docks in the borough of Tower Hamlets to a boathouse on the Greenwich Peninsula 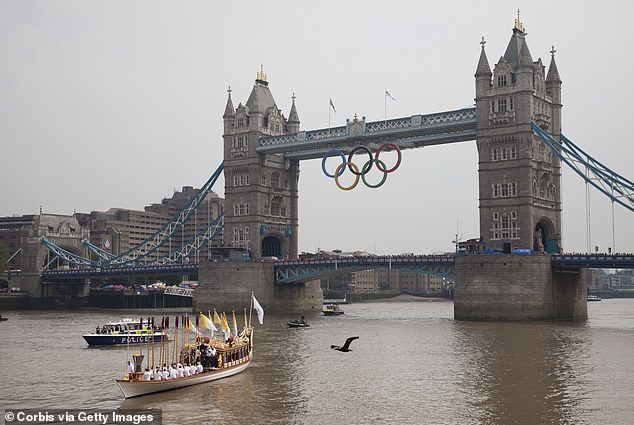 The pageant for the London 2012 Olympic Games is led by the royal barge Gloriana, which arrived at its final destination at Tower Bridge after making its way up the Thames

Pictures from Pixelflakes show an artist’s impression of the boathouse, for which planning permission from Greenwich Council is expected to be given later this year, with building work for the development set to begin in 2023.

The boathouse is designed by architects Carmody Groarke and will be glazed on either side, allowing it to be viewed by visitors.

Andy Groarke, from Carmody Groarke, told The Times: ‘The new boathouse will provide a permanent shelter dedicated to the long-term protection and public exhibition of Gloriana.

‘The fully glazed walls of the pavilion will open-up uninterrupted views of the Queen’s row barge from both the Thames and the river path, whilst the existing jetty will be rehabilitated and extended to enable the Gloriana to be safely launched on to the Thames, as well as providing a public belvedere.’

The 18-oared vessel, which is stored at St Katharine Docks in the summer months and in Essex during the winter, harks back 200 years to when kings and queens travelled by water in opulent style. 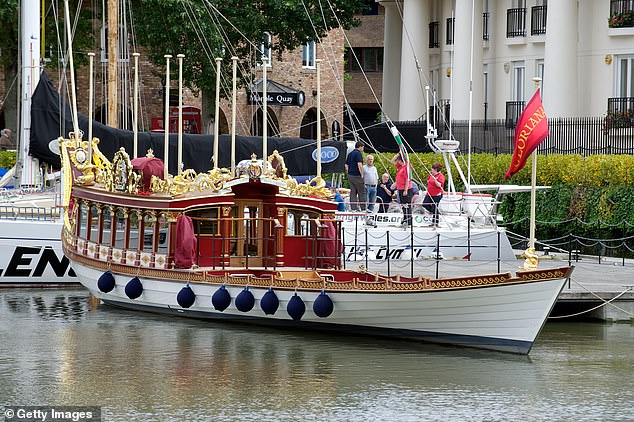 Gloriana moored at St Katharine Dock in the borough of Tower Hamlets in 2012. Developers requested the barge to be moved due to a ‘lack of shelter and protection’ 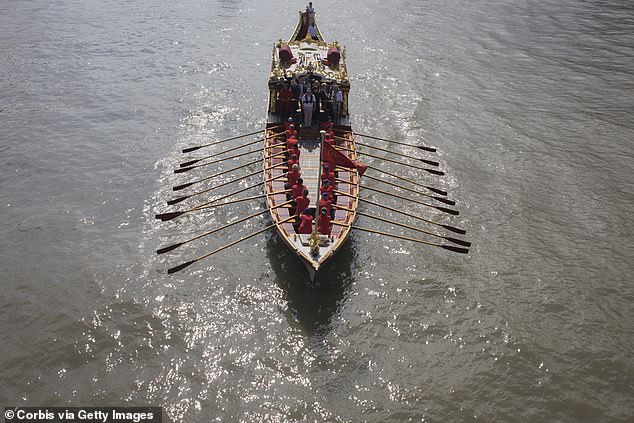 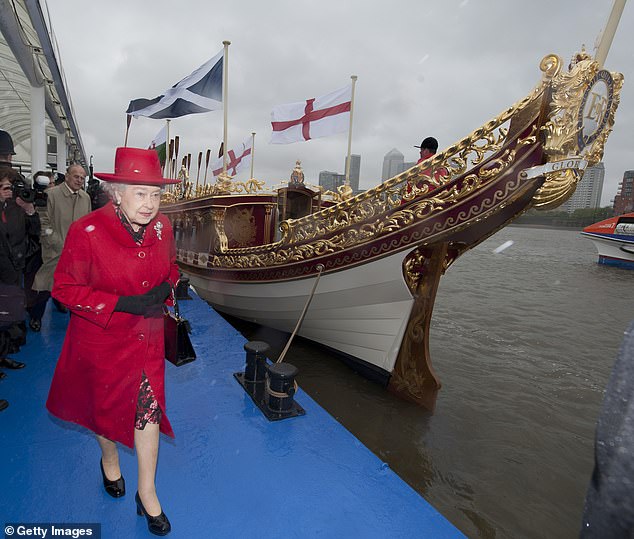 The Queen, accompanies by Prince Philip, visits Gloriana, which was built to mark the Queen’s Diamond Jubilee, for the first time at Greenland Pier, Greenland Dock on the Thames 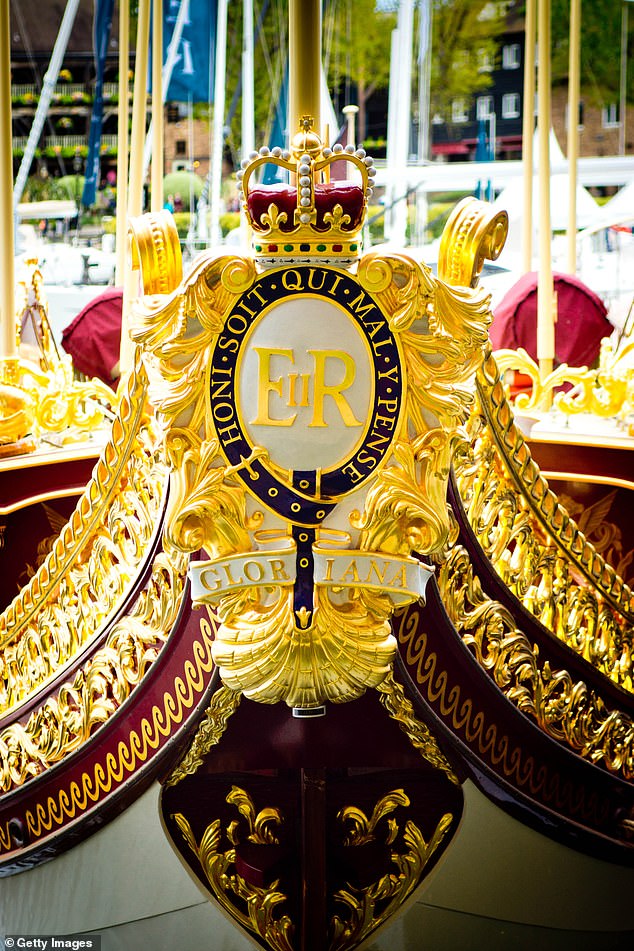 The design, inspired by the boats from Canaletto’s famous 18th Century painting of a Thames pageant, incorporates sweet chestnut wood taken from the Duchy of Cornwall estate.

It was initially set to carry the Queen or the Duke and Duchess of Cambridge, but in the final stages of preparation it was decided the Royal Family would not embark on the Gloriana and would instead board the Spirit of Chartwell.

The boat did, however, carry the Olympic flame along the Thames on the final day of the Torch Relay ahead of the London Games that same year.

And in September 2015 it took to the river again as part of a royal salute to celebrate the Queen becoming the longest reigning British monarch.

Edward Burnett’s design saw the exterior of the Gloriana marked by 3ft golden rampant lions, and the interior decked out with grey-green brocade cushions.

The wooden floor was covered in a grey-green rug with the Queen’s cipher woven in old gold on a fretwork pattern, specially designed by Emily Todhunter and handwoven in Nepal.