It’s estimated that 26million UK drivers are planning to hit the road this Easter bank holiday – and no doubt many will enjoy a song or two in the car.

And new research has revealed that the Queen hit Bohemian Rhapsody is the song that’s most likely to be belted out.

The study looked into the songs that bring passengers together during long car journeys.

The 1975 Queen anthem topped the chart and was closely followed by Bon Jovi’s Livin’ On A Prayer, followed by the cheesy classic Sweet Caroline by Neil Diamond.

They were followed by ABBA’s Dancing Queen, while rounding off the top five was the Journey track Don’t Stop Believing.

Other sing-a-long tunes in the top ten include I Will Survive by Gloria Gaynor, Wonderwall by Oasis and The Beatles’ classic Hey Jude.

Meanwhile, the research, by the AA, also found that over half (51 per cent) of holidaymakers will be joining in on a sing-a-long, belting out an average of eight tunes on a road trip.

While a massive 95 per cent of people said that it was music that makes the journey fly by.

The research found that pop songs are most likely to spark an impromptu singing session, with grime music the least popular genre for a sing-a-long.

And drivers are so keen to not miss a beat that nearly half (45 per cent) have driven past their destination so that they can carry on listening to their favourite tunes.

The clear majority (84 per cent) claim that they would find it unbearable not having music in the car. 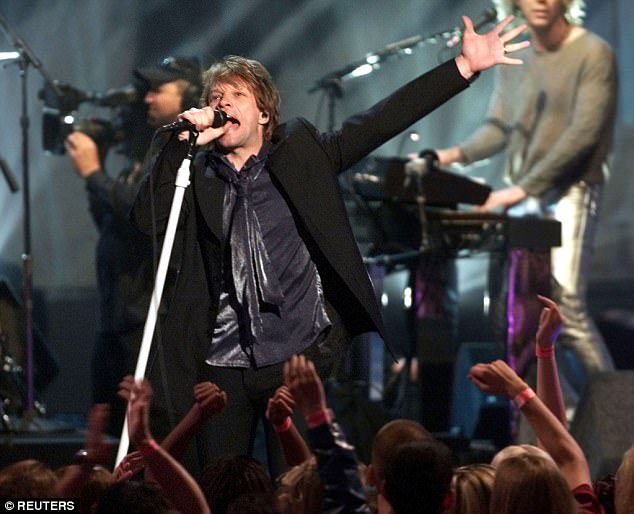 The 1975 Queen anthem was closely followed by Bon Jovi’s Livin’ On A Prayer. Pictured is Jon Bon Jovi

Yet, long car journeys aren’t always harmonious with an average of two squabbles per trip and 43 per cent admit to rowing about what music to listen to.

Cheryl Calverley, Marketing Director at the AA, comments: ‘Our research has shown that we’re more likely to sing in the car than anywhere else, with group sing-a-longs forming special memories for 74 per cent of us.

‘It’s no coincidence that the favourite sing-a-long song, Bohemian Rhapsody, also featured in the famous car scene from the hit movie Wayne’s World.

‘We hope that this sing-a-long playlist helps contribute to these experiences and show that car journeys can be as fun as the destination this bank holiday.’

6. I will Survive – Gloria Gaynor