‘It’s easier for me to carry them’: Moment the Queen’s lady-in-waiting schools a giggling garden party guest in royal protocol after she handed a posy of flowers directly to the monarch

Video has captured the moment a giggling woman broke protocol at a garden party.

Estate agent Laura-Ann, from Belfast, shared a video with her 64,000 Instagram followers showing her handing Her Majesty a bunch of flowers at Buckingham Place on Wednesday.

The Queen politely thanked Laura-Ann and handed the bouquet to her lady-in-waiting.

In the clip, Laura-Ann says: ‘Your Majesty I’ve bought some flowers for you. You look beautiful in pink today, have a lovely tea.’

The Queen replies: ‘That’s very kind of you, thank you very much’.

She swiftly gave the flowers to her lady-in-waiting, who walked over and told Laura-Ann: ‘It’s easier for me to carry them, then the Queen can have them when she goes indoors.’ 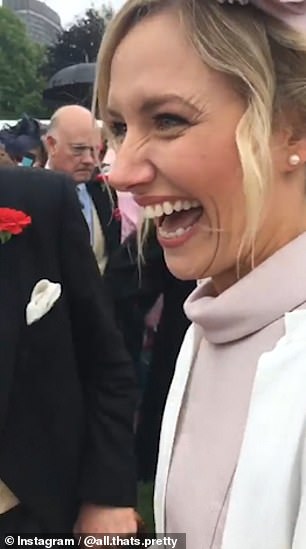 Laura-Ann shared a video with her 64,000 Instagram followers showing her handing Her Majesty a bunch of flowers at Buckingham Place 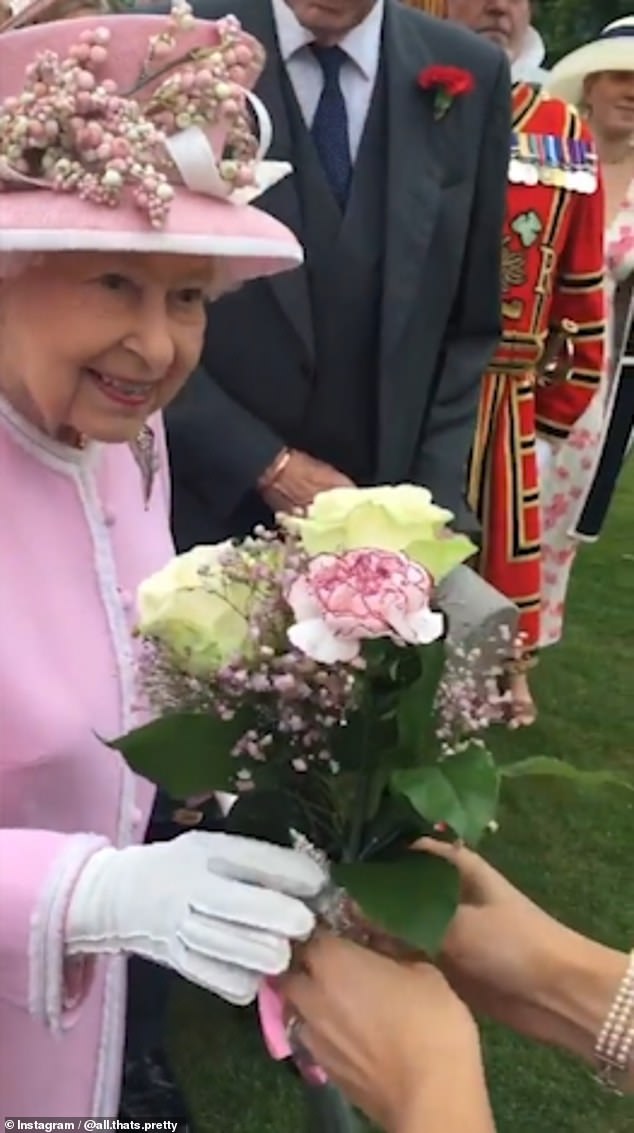 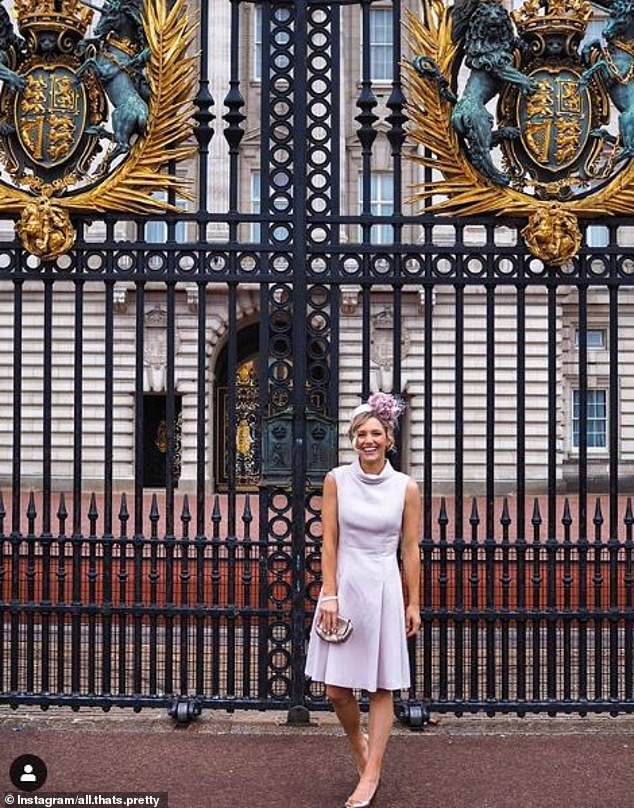 The 30-year-old shared the video on Instagram with the caption: ‘#FLARRS FOR THE QUEEN!’ and said the moment was a ‘life highlight’.

She later added: ‘What A Day! I’m soaked .. my hair has fallen flat and my feet are frozen but it was all so worth it! Couldn’t resist one last snap in the queen’s flarrs before I left! She’s got quite the garden. What A Day.’

Speaking after the event, Laura-Ann said: ‘It was very surreal – I really didn’t think I would get the opportunity but she smiled so warmly at me and thanked me very much. There were 8,000 people there and I honestly couldn’t believe my luck. I was just in the perfect place at the right time. 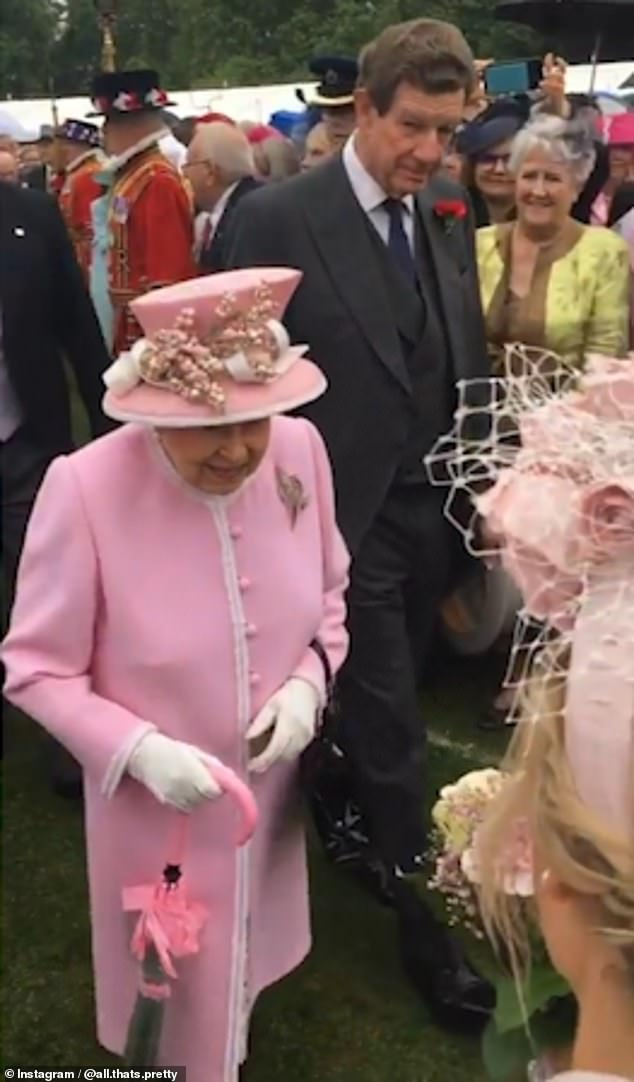 In the clip, Laura-Ann says: ‘Your Majesty I’ve bought some flowers for you. You look beautiful in pink today, have a lovely tea’ 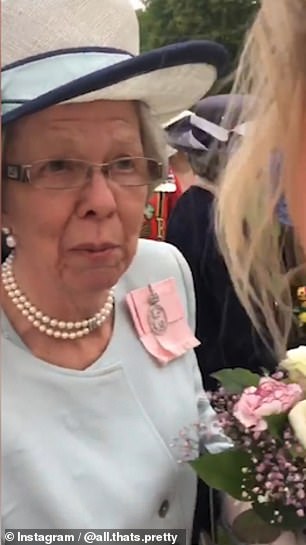 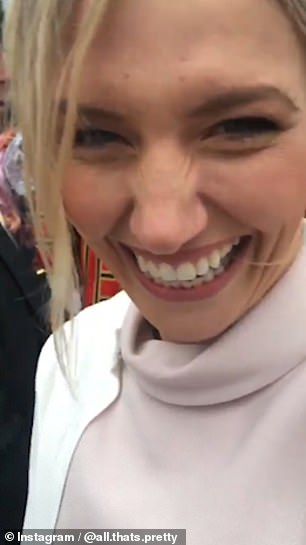 The 30-year-old shared the video on Instagram with the caption: ‘#FLARRS FOR THE QUEEN!’ and said the moment was a ‘life highlight’ 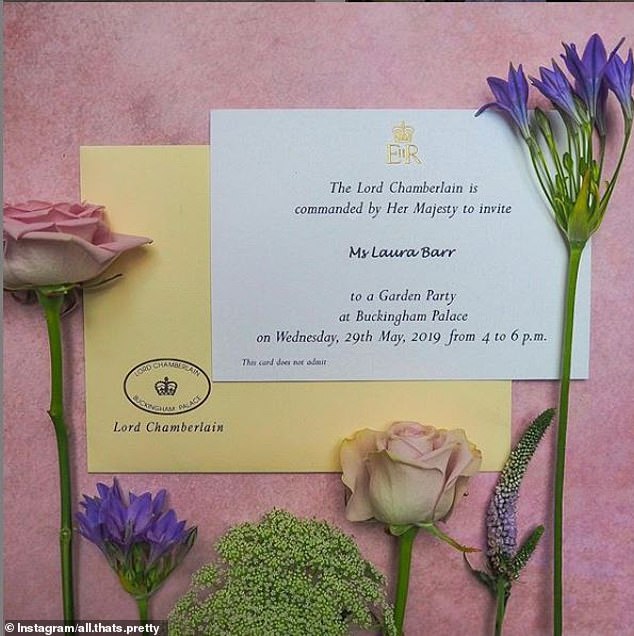 Speaking after the event, Laura-Ann said: ‘It was very surreal – I really didn’t think I would get the opportunity but she smiled so warmly at me and thanked me very much’. Pictured, her invitation to the event

‘I had brought flowers with me, as I know with previous royal encounters (Kate and Meghan) that they are most likely to stop if you have them!

‘While everyone was sheltering form the rain in the normal tea tents, mum and I stood for over an hour at the entrance of the royal tent with our umbrellas up patiently waiting hopeful we would have the best chance of seeing her up close and possibly meeting her.

What is the protocol for handing flowers to the Queen?

However, she usually quickly hands them over to an aide who will carry them for her, or in turn pass to another member of staff.

Gifts including flowers that are handed over during such an occasion are deemed to be ‘official’.

There is protocol regarding any gifts given to the royal family, and guidelines as to what can and cannot be accepted. Policy states that anything gifted by a private citizen should be refused if accepting it might place the recipient ‘under any obligation to the donor’, and receiving it is discouraged if it is of a high monetary value.

Perishable goods, such as flowers, with a value less than £150 that will not be personally used or consumed by the member of the royal family concerned are sometimes given to charities or other third parties, including staff, to avoid waste.

When she arrives at a garden party, the Queen traditionally walks along a line-up of visitors, but does not stop to greet them. However, in this occasion she did speak to Laura-Ann as she accepted the flowers.

Convention dictates that you shouldn’t speak to the monarch, unless spoken to first.

‘I didn’t see anyone else with flowers, I suppose it’s not really meant to be done at a garden party but I was only going to have one chance of meeting the queen and I was going to give it my all.

‘They did inform me that unfortunately she would not stop to accept them as it’s not protocol and but if I’m lucky her lady in waiting might spot them and accept them on her behalf.

‘I think they were very shocked when it happened and her majesty happily stopped in her path to approach me and accept them.’

Prince Harry and Princesses Beatrice and Eugenie were also at the garden party on Wednesday.

Laura-Ann added: ‘Afterwards even the security staff congratulated me and said they were surprised she stopped and accepted the flowers. They said that had not happened ever before.’

Laura-Ann met the Duchess of Cambridge, who she calls her ‘idol’ at a garden party in 2016, writing on her blog: ‘She asked me my name and I was so gobsmacked I couldn’t speak.

‘I had planned to say many many things, but nothing would come out. She then complimented my dress and moved on. I continue to believe if I had have been able to speak we would have become extremely close friends.’

She has also met the Duchess of Sussex at a royal walkabout.

Laura-Ann’s mother, who accompanied her to the garden party, also handed the Queen a bunch of flowers on a visit to Northern Ireland 20 years ago.