A quiet coastal is under siege from an unlikely enemy, with some locals afraid to leave their homes because of a growing mob of kangaroos.

The 220 residents of Maaroom on Queensland’s Fraser Coast have been forced to carry sticks and other implements when they leave their houses in an attempt to deter the aggressive ‘roos, while others have tried to run the animals over with their cars.

Officials from Queensland’s Parks and Wildlife service have asked locals to stay away from the huge eastern grey kangaroos in the area following attacks over the past year.

In July, a 67-year-old Sunshine Coast woman was brutally attacked by a kangaroo on a walk in Maaroom.

She was bowled over by the large ‘roo before it began kicking her until a man charged it with a stick. It then turned its attention to him, chased the man away.

The woman was left hospitalised with a broken femur, scratches and bite marks.

Another attack in the town left a person with spinal injuries and their friend with multiple cuts on the arm. 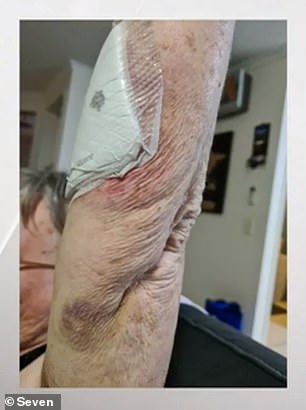 The kangaroo population has been steadily growing in Maaroom and wildlife authorities have had to remove multiple problem kangaroos.

‘Residents are advised to keep their distance from the kangaroos, to treat them with caution and to retreat if they approach,’ said Frank Mills, manager at Southern Wildlife Operations.

Mr Mills also said the kangaroo population is encroaching on the town after residents started to feed them. The animals are also grazing on grass growing on residents’ front lawns.

‘The kangaroos are moving between nearby bushland and into the residential area…’ Mr Mills said.

‘At community meetings, we have received advice that some residents have been feeding the kangaroos, which can change the way the kangaroos interact with people.’

Kangaroos have overrun the public places in the town, with wildlife authorities warning residents and visitors to keep their distance 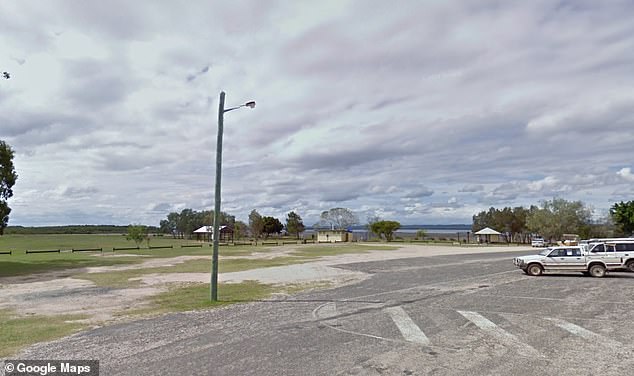 Mr Mills also said the feud between humans and the kangaroos had escalated with residents trying to defend themselves against the animals.

‘We also received information that some residents are using gel-blasters to move the kangaroos on, while others are trying to run them over in their cars.

‘This type of behaviour is not only an offence but will cause stress to the animals and bring them into conflict with other local residents, so we’re advising all Maaroom residents that kangaroos can behave unpredictably and to stay away from them.’ 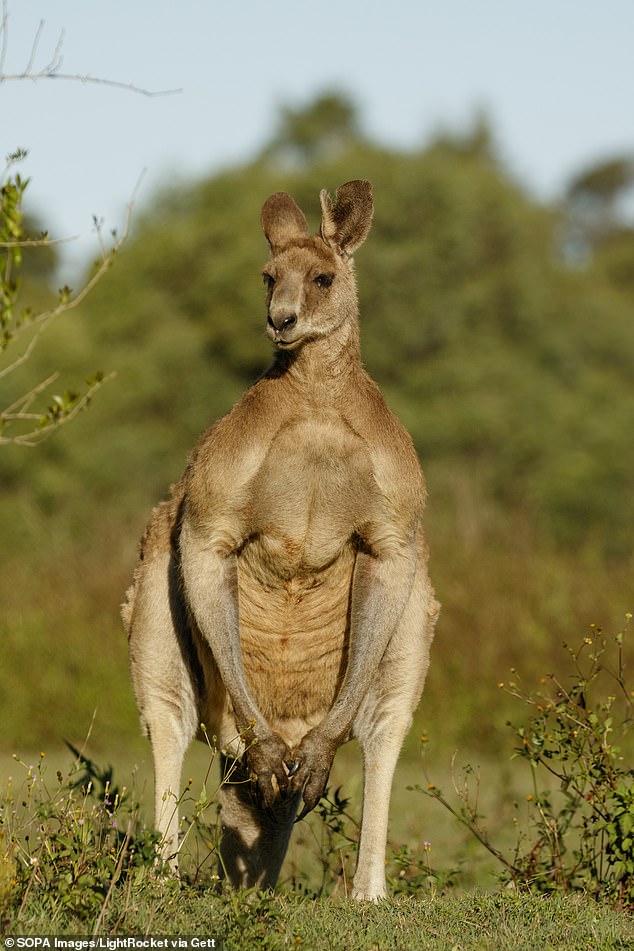 The Maaroom eastern grey kangaroo population has been growing, with the huge mammals becoming more fearless while grazing in the town

‘They’ve multiplied because we supply a Sizzler smorgasbord for them,’ local resident Mark Sidaway told ABC News, saying La Nina conditions in the past two years had seen the ‘roos feasting on quickly growing grass.

Manager of Maaroom Caravan Park Karen Sutcliffe told ABC many people were afraid to walk out of their homes for fear of kangaroo attacks.

‘People are walking around with big sticks now,

‘I’ve been wanting to go fishing of an afternoon but I won’t do that, just in case a kangaroo gets me.

‘They’re just so quick you don’t know where they are.’

How to avoid violent kangaroos

How to reduce interactions with kangaroos:

– Don’t feed wildlife. It can cause the animals to become dependent on humans and increase the chances of aggressive behaviour.

– Exclude them from your property with appropriate fencing. Fences should be approximately 1.5metres high and include a gate for animals to leave easily should they enter the property.

– Increase the coverage of other vegetation to reduce lawn size and grazing comfort.

– Deter them with blood and bone fertilizer, sonic deterrents or motion activated security lights which may discourage night-time grazing.

How to avoid roo attacks:

– If you are approached by an aggressive kangaroo or wallaby you should keep it at a safe distance so that it can’t kick or scratch.

– Hold up a stick or branch, or stay behind a fence or a tree.

– Turn side-on and protect the front of your body with your arms and keep your head as far away from the animal as possible to minimise the risk of being scratched on the face.

– If you can’t escape an attacking kangaroo or wallaby, roll up into a ball on the ground with your arm covering your neck and call for help, try to roll or crawl away to a safe place.