An unemployed couple who fed their two dogs a vegan diet which lead to one of them being put down have been banned from owning pets for three years.

Price and her partner James McKenzie from Cow Bay, north of Port Douglas were also fined $4,500 plus vet costs on Thursday.

The RSPCA seized the malnourished five-month-old dogs, Ula and Roo, in May last year following several weeks of investigations.

‘You eat murdered animals, you will never be like us — we are vegans and love animals,’ McKenzie told the RSPCA staff as they rescued the seriously ill puppies.

When the dogs were taken in to the vet they were so malnourished they were unable to stand up (pictured, Ula, who was saved and adopted by another family who have renamed him Scrappy Doo) 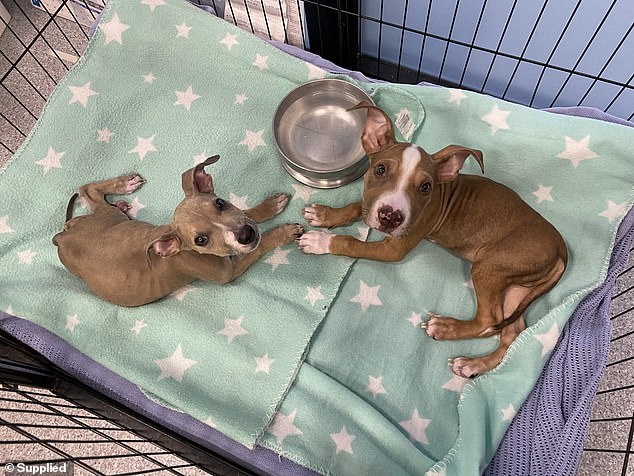 The two puppies underwent days of emergency treatment when they arrived severely underweight at the vet (pictured, Roo, left, who did not survive, and Ula, right) 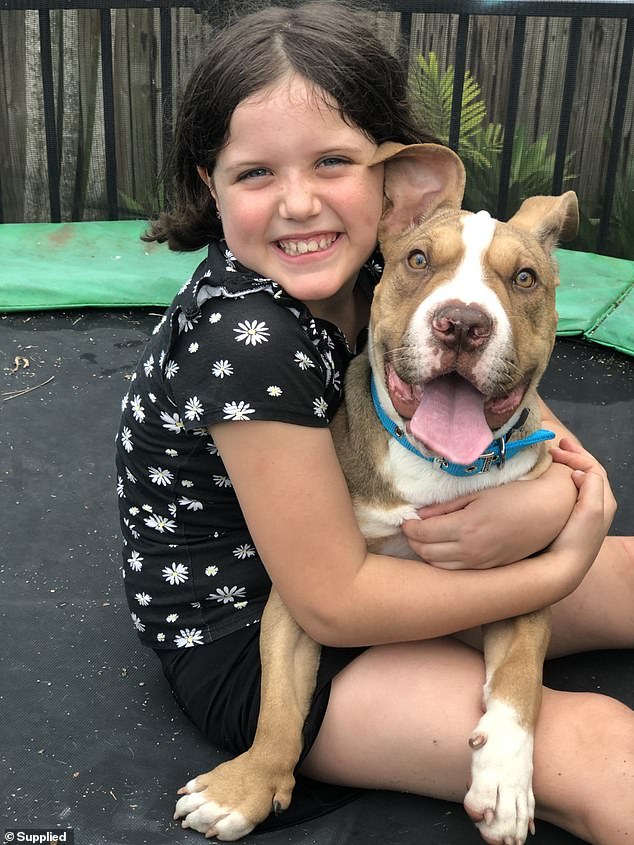 When the Bull Arab pups were seized they were both lame and malnourished.

A video of the dogs by RSPCA Queensland showed they unable to stand up because they had been ‘lying down too long’.

The dogs were put in the care of a vet as they underwent days of emergency treatment.

Roo had a leg injury that the couple had tried to treat with a homemade cast made following information from the internet, the owners told an RSPCA inspector they used a homemade cast because they couldn’t afford to go to the vet.

When Roo arrived at the vet he was underweight, and unable to stand and had blisters from the homemade cast rubbing against his stomach.

Unfortunately, Roo was put down on the advice of three independent vets after reviewing his quality of life due to lifelong pain. 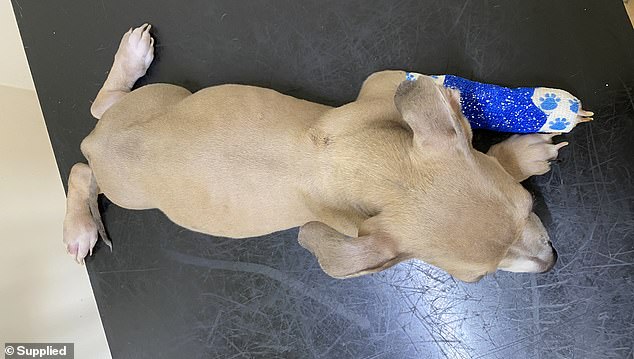 Ula’s treatment went well and he was able to be readopted but his front paws have been permanently disfigured.

The owners said they were treating a number of the dogs injuries with tea tree oil, oregano oil capsules and a cortisol cream for skin conditions.

When an animal inspector asked the owners what dog food they had Ms Price showed them a pantry which included lentils, rice, pasta, quinoa and grains, a statement of facts by the RSPCA said, the Courier Mail reported.

‘All food sighted was indicative of a vegan diet,’ the statement said.

‘There were no dog food or meat products at their property.

‘There were also no water bowls inside or outside of the house for the puppies.’ 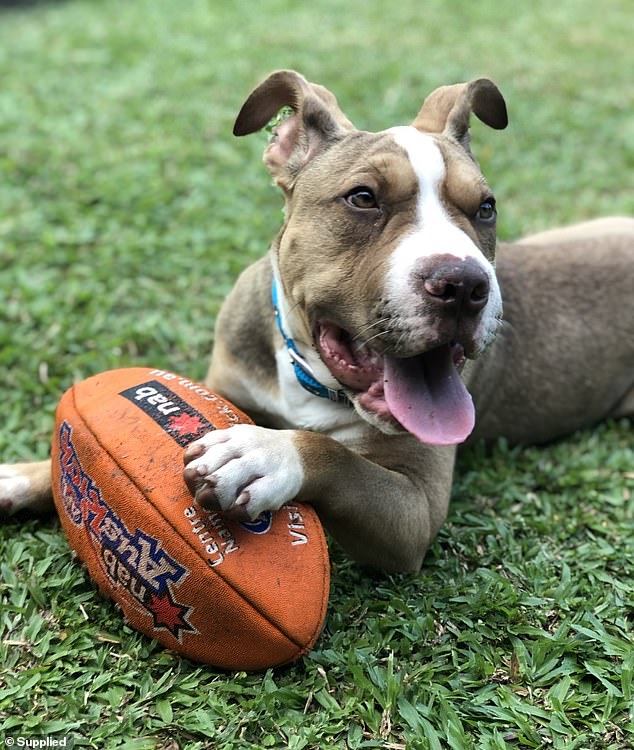 Ula, who was renamed Scrappy Doo’s (pictured), paws have been permanently disfigured but she has made a remarkable recovery 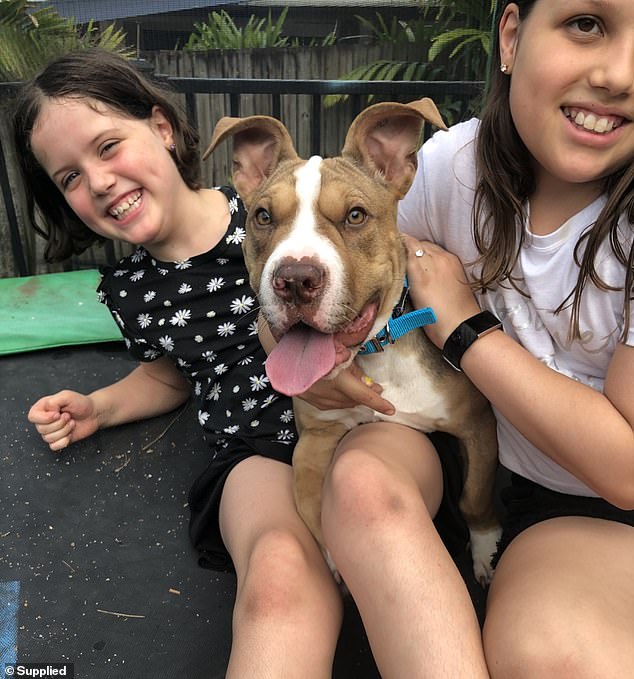 In a video taken from one of the inspections the RSPCA inspector can be heard asking what the dogs had been fed while noting their slim appearance.

‘What are you feeding them?’ the inspector asked.

‘I can see a lot of food in your fridge, but I’m still unable to see any dog food.’

Ms Price also claimed to make her own dog food but despite not sharing what ingredients were used said it ‘met dogs’ nutritional requirements’.

The couple told an inspector that they had been feeding the puppies on rice and chickpeas since they had run out of dog food and were unable to purchase more, ABC News reported. 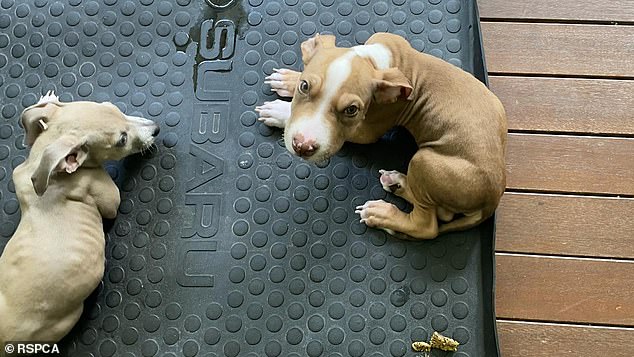 An RSPCA inspector who asked what they had been feeding the dogs was shown a pantry of lentils, rice, pasta, quinoa and grains (pictured, Roo, left, and Ula, right)

On one occasion when an RSPCA inspector attended the property Mr McKenzie lied to the inspector saying the dogs had been euthanised and had ‘gone to God’, yet the RSPCA later found out that the dogs were still alive.

Ula, who was able to be saved and is healthy and happy since being adopted by a family in Cairns and renamed Scrappy Doo.

Both Mr McKenzie and Ms Price pleaded guilty in the Mossman Magistrates Court to the charges.

50 per cent of their fines will go to the RSPCA. 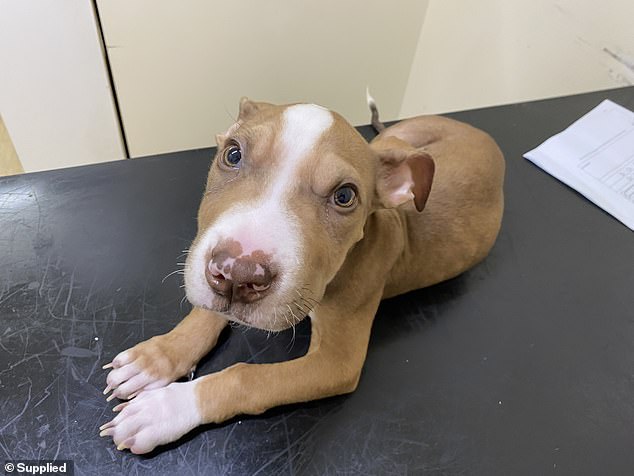