Queensland: Disturbing messages the mother of a murdered child wrote in bizarre artworks

A mother accused of killing her eight-year-old son allegedly claimed a ‘voice told her’ to kill him, as court documents reveal disturbing new insights into the little boy’s death.

Zion Ziggy Sean Goltz died inside his home in Rockhampton on July 29, with mother Louwanna Thyra Goltz, 36, charged with his alleged murder and remanded in custody.

Court documents from Rockhampton Magistrates Court say Ms Goltz turned up at family members’ house at around 1am on July 30 where she was allegedly ‘rambling incoherently about spirits and referencing a covered artist’s canvas’ in her possession.

The artwork allegedly included the message ‘protect Zion from Satan’.

Zion Ziggy Sean Goltz (pictured) died inside his home in Rockhampton sometime on July 29, with mother Louwanna Thyra Goltz charged with his murder

Queensland Police attended the home on Waterloo Street in Berserker just after 2:20am on Sunday morning to perform a welfare check, before finding Zion unresponsive.

In an objection to bail affidavit filed by police, first responders believed the child had died from strangulation, the ABC reported.

But an autopsy will be conducted to confirm the cause of death.

A witness told police the mother had been lying down watching TV with her son before a voice allegedly told her to kill him ‘because Child Safety would take him away and she herself would end up in a body bag’, court documents state.

Police will allege Ms Goltz’s mental health had ‘rapidly declined’ in the weeks leading to Zion’s alleged murder, and ‘alarmingly quickly within the last week’.

Court documents reveal that family and neighbours had repeatedly heard the mother shouting over the past month. Some even reported her speaking an unknown language.

The relationship between Zion and his mother had previously been strong, but witnesses in the affidavit said it had recently turned.

One person claimed to have heard Ms Goltz talk about spirits, constantly referring to the canvas with satanic writings, the court documents state. 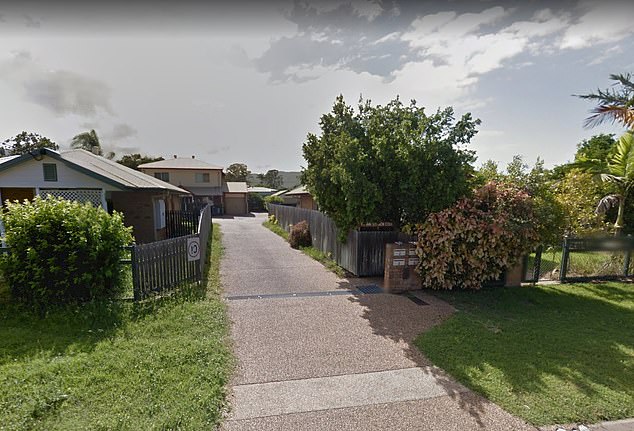 Queensland Police attended the home on Waterloo Street in Berserker just after 2:20am on Sunday morning to perform a welfare check, before finding Zion unresponsive

The artwork has been seized by police, which contains several references to Christian themes: ‘May Lord Jesus forgive me for hurting Zion’, ‘Protect Zion from Satan’, ‘Satan leave Ziggy alone return to mother now’ and ‘Satan return to hell leave Zion soul’, the affidavit states.

Ms Goltz was taken to the Mental Health Unit after mentioning spirits and voices while in the presence of police, often apologising for disrespecting the voices, court documents reveal.

She allegedly refused medication and had a series of bruising and scratch marks on her throat.

The affidavit says Zion had been born prematurely and needed an oxygen tank to breathe for his first year. He was later diagnosed with autism.

His mother will next appear in court on October 26.

‘It hits a little bit harder when there’s an eight-year-old boy who’s been found deceased,’ he said.