Queensland drivers on mobile phones will be fined $1,000 and repeat offenders will lose licences

Australian drivers caught using their mobile phones behind the wheel will now be fined $1,000 in the biggest crackdown the country has ever seen.

From Saturday, Queensland will enforce the harshest penalties in the country when it increases the fine for the offence by more than double from $400 to $1000.

In addition, drivers caught using their phone twice within a year will lose their licence when the new penalties come into effect on February 1.

While the Sunshine State leads the way in the battle against driver phone use, other states such as Victoria are poised to follow suit.

Queensland drivers caught using their mobile phone while driving will be fined $1,000 and receive three demerit points from Saturday – the harshest financial penalty for the offence in Australia (stock image)

In addition to motorists, cyclists will also be fined $1,000 for using their phone while riding but no demerit points will apply.

For motorists, the first offence will attract four demerit points, meaning P-platers and learners could have their licence suspended after being caught once.

Under the law, all drivers are not allowed to hold a phone in their hand next to their ear or operate any function on their phone including texting or turning a phone on. 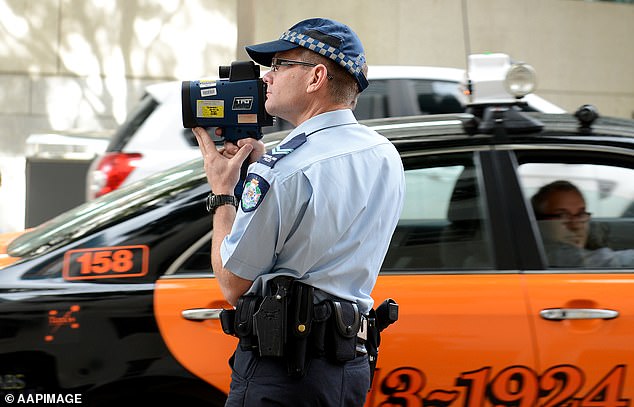 Queensland Police will also be on the lookout for cyclists using their phones while cycling, who will also be fined $1,000 for the offence

Transport minister Mark Bailey made no apologies for the tough new crackdown.

‘It’s a deadly habit that needs to stop,’ he told The Courier Mail last year.

‘Drivers using their phones illegally behind the wheel will be made to pay a high price. But that penalty falls well short of the costs and trauma our community carries for those killed or injured in crashes caused by inattentive drivers.’

Meanwhile, Daily Mail Australia revealed on Sunday that Victoria is also set to increase its fine from $496 to $1,000 over the next six months.

Victoria road safety minister Jaala Pulford said 2019 had been a ‘devastating year’ on the state’s roads and the government was considering using cameras that were able to detect drivers using their phones.

NSW is currently trialing groundbreaking technology that detects mobile phone and caught 3,300 drivers in its first week of operating in December.

Drivers busted by a mobile phone detection camera in the first three months will only receive a warning letter.

When the grace period ends in March, drivers will cop a $344 fine, or $457 in a school zone, and five demerit points which increases to 10 during double demerit periods.