So, in a desperate bid to overhaul is lifestyle and get back into shape, the 22-year-old signed up to cult Australian fitness program F45 – a program that would test his endurance and teach him more about himself than he thought possible.

Six months on and the Queensland-based fitness addict has shed a staggering 51 kilograms and debuted an astounding full body transformation.

It wasn’t an easy process for Mr Walker, who set out on his weight loss goals with little confidence and a lot of uncertainty. 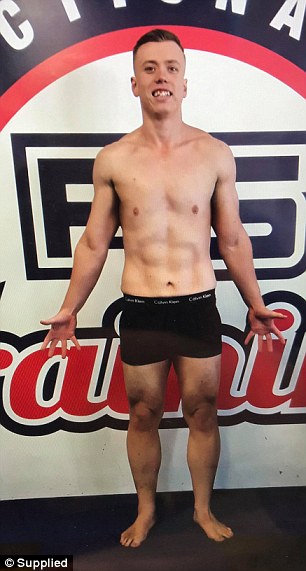 In early 2017, Australian retail manager Sam Walker weighed 160 kilograms (left) before shedding 51 kilograms (right) by signing up to F45 and transforming his diet

‘I had no confidence, no desire to achieve anything, was sad with some past experiences and life in general. I based a lot of how I was feeling on my appearance so, I decided to do something about it,’ he wrote.

‘The class had me leave and vomit three times and not want to ever go back,’ he recalled.

‘I ended up going back and really thought about what I wanted to achieve in my fitness journey. Back then I had no idea what was even possible and the first challenge was coming up,’ he said. 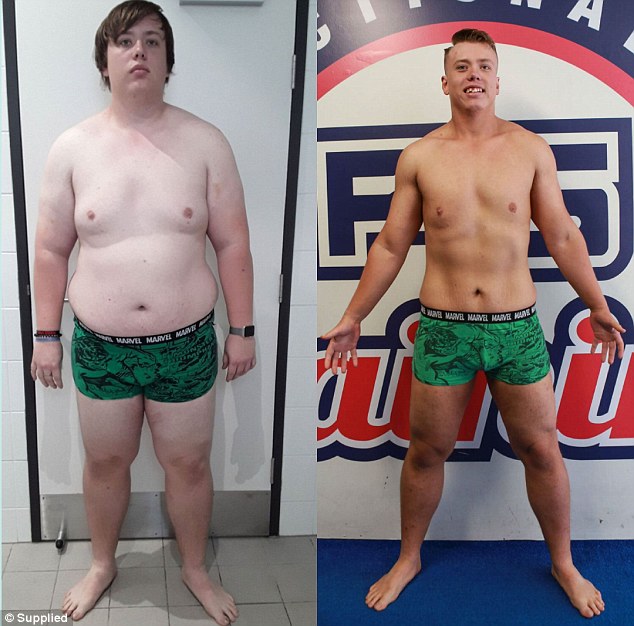 How does the F45 form of training differ from other workouts?

The fusion of these three training concepts has lead to the development of 31 different, 45 minute workout experiences, with more in development by our F45 Athletics Department.

This combination of interval, cardiovascular and strength training has been proven to be the most effective workout method for burning fat and building lean muscle.

Mr Walker signed up for the company’s famed eight week challenge – a three phase program that is responsible for thousands of body transformations both in Australia and internationally.

Participants are given a meal plan to follow each week which helps them get rid of water retention, lose sugar cravings, build muscle and lean out and they are expected to exercise up to five times per week.

The exercise classes are all slightly different and focus on ‘functional’ training – that is is exercise that mimics or recreates everyday movement – and involve things like lifting, squatting, jumping, twisting, pulling, pushing, punching, kicking and rowing.

‘I gave the challenge a go, slowly increasing my training from two to four times a week to around four to six by the end of week three,’ Mr Walker said. 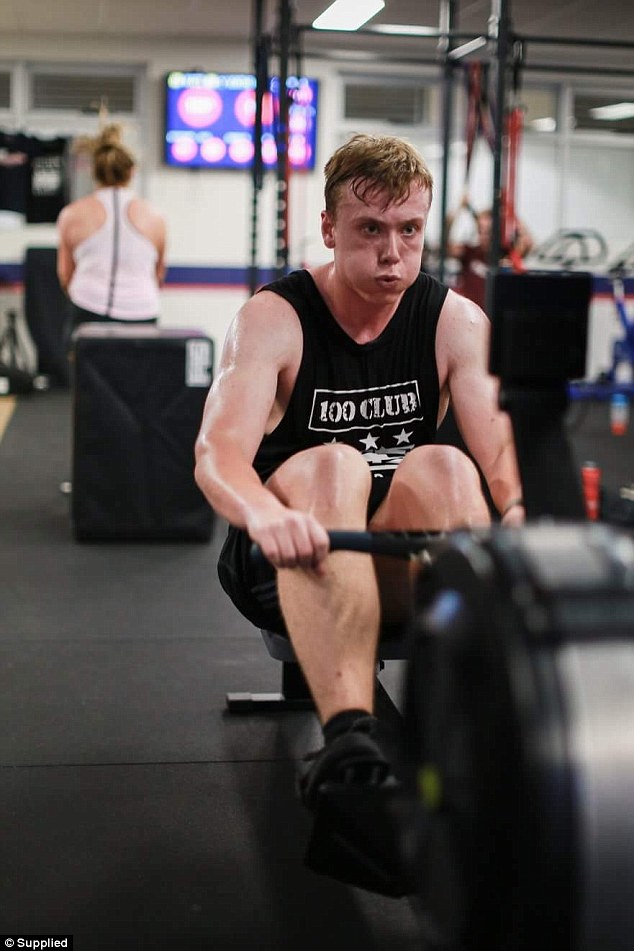 ‘The class had me leave and vomit three times and not want to ever go back,’ he recalled

Average day on a plate during the challenge for each phase

‘Going into the challenge I thought the hardest part was going to be the training, oh boy I was in for a shock.

‘Changing your lifestyle isn’t as easy as I thought. Sticking to a clean and healthy meal plan for two months and coming off fast food was the toughest mental decision I’ve ever had.’

Mr Walker said it was a ‘mental fight’ to stick to the program but when he reached week four, something ‘switched’.

‘I realised that if I really wanted to become healthy that I needed to change my mentality. Ever since that moment I realised that it’s a mental block, I made a decision that I would train daily to become better than yesterday,’ he said. 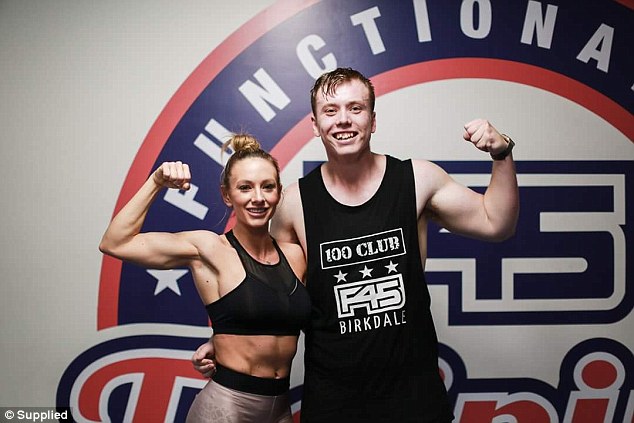 Mr Walker said it was a ‘mental fight’ to stick to the program but when he reached week four, something ‘switched’ (pictured with ambassador Paige Hathaway)

‘I started doing double sessions and by week eight I did 15 sessions within a six day period.

‘Overtraining was such a highly talked about topic over my first challenge, burning muscle, fatigue, lack of sleep etc. All I can say is do your own research and listen to your body.’

Mr Walker lost 21 kilograms by the end of the first challenge before starting another one a few weeks later.

‘These eight weeks were definitely a lot easier than the first. I loved the food, the foods I hated like green beans etc I now enjoyed. The training I loved, smashing sessions out,’ he said. ‘This challenge I learnt so much about myself more than anything. For the eight weeks I averaged 16 sessions per week. I definitely felt it by Sunday every week.’

Mr Walker said that the challenge showed him how ‘spectacular’ the human body was and that it can ‘do amazing things’.

‘At the end of the second challenge I had lost another 18kg which brings us to now. I currently sit at 109kg from 160kg,’ he said.

‘I get up look in the mirror and remember daily on what I looked like, and get frustrated and disappointed with how I let myself become so big.’

This, he says, drives his desire to reach his fitness goals. 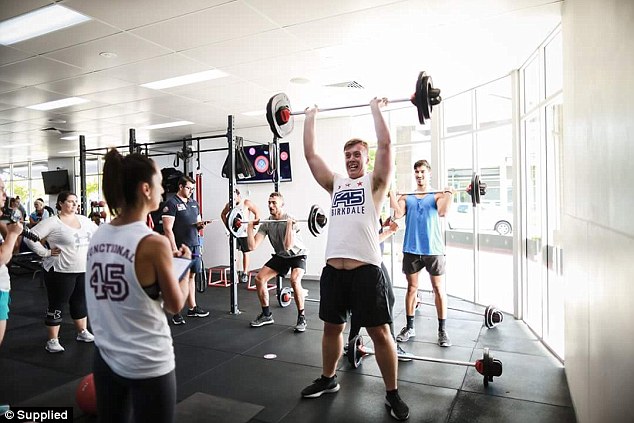 ‘I get up look in the mirror and remember daily on what I looked like, and get frustrated and disappointed with how I let myself become so big,’ he said 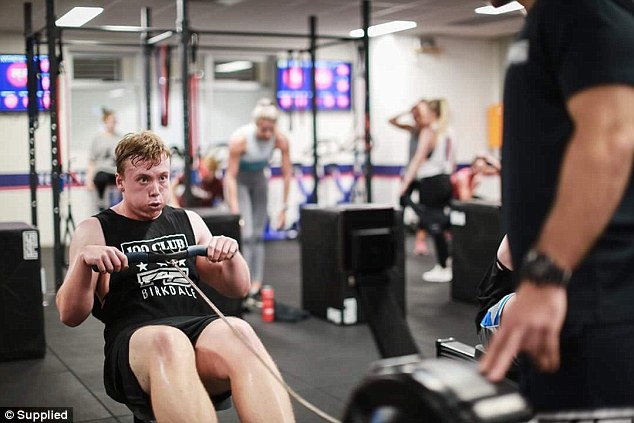 ‘My frustration with how I looked, drives my ambition and desire even more to achieve more, become faster, stronger, fitter and leaner,’ he said.

‘Over the past six months I’ve had some doubts and days where things didn’t go to plan. Having a solid support network who believe the same things you do, support what your trying to achieve is something I was blessed with.’

‘I’m far from finished on my journey and feel still like a novice,’ he said.

‘There is still a long way to go before I’m going to look in the mirror and be satisfied but I’m looking forward to that day. Gives me motivation every day to wake up and go get it.’