Beware of the DUCK! Brave guard fowl Dwayne chases away an innocent house visitor to protect his girlfriend Doris

A staunch duck has bravely chased a woman away from a backyard thinking she was a dangerous home invader.

The ferocious quack attack which was captured on a home surveillance camera came when a friend of the homeowner entered the yard to drop off a set of keys.

But as she strolled into the Queensland property in Toowoomba, Dwayne the Muscovy duck leaped into action and defended his home.

‘It was the funniest thing I have ever seen,’ the homeowner told 7News.

‘You can’t see it but at the end of the video she had to hide behind her car from him.

‘Then, he eventually found her and chased her up the road.’

The homeowner said he and the vigilante duck had an ‘instant connection’ when the pair first met.

He bought the unusual pet from his local PCYC market for just $10 and the two have hit it off ever since. 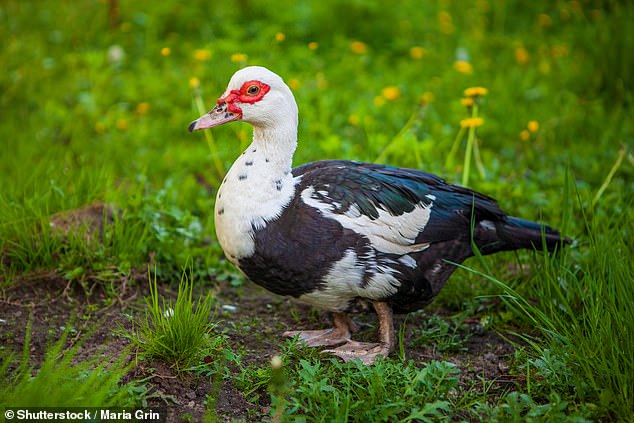 Although Muscovy ducks are native to the mean streets of Mexico and South America, populations of the long clawed, wide-footed bird are now also common in Australia and New Zealand.

But while Dwayne is a duck that’s not to be messed with, he also has a softer side.

‘He has a new girlfriend called Doris and he is quite passionate about Doris,’ the homeowner said.

‘She is in a pen at the moment and I have to separate them because they are quite frisky.’

The homeowner suspects Dwayne was trying to protect his feathered fling when he lashed out at the woman who entered the yard.