An anti-vaxxer who allegedly threw a brick at a Labor MP’s office window has been charged by Queensland Police.

The arrest follows MP Ali King’s staff being subjected to verbal abuse and death threats in the lead up to the announcement of the state government’s restrictions on people who are not fully-vaccinated.

‘They found the person in a side street nearby. The call to the police was made at about 2.30 in the morning and the person was picked up at about 4am,’ Ms King told Daily Mail Australia.

Queensland Labor MP Ali King, pictured in front of her office window that was smashed by an anti-vaxxer

The vandalism followed threats that were made mostly to her electorate staff.

‘My senior electorate officer received a death threat and there has been really quite serious verbal abuse and online abuse,’ she said.

‘If people have concerns about the Covid vaccine, please pick up the phone and call a health professional, don’t pick up a brick and throw it though a window.’

She said while she is used to getting abuse, recent events have crossed a line.

‘My staff work very hard to support their community and they don’t deserve this. Nobody deserves to feel or be threatened when they’re trying to do their job.’

Ms King said whoever smashed her office windows was trying to send a message about Covid-19.

‘After smashing our front windows with the brick, this person posted up an anti-vaccination poster onto the window,’ she said.

‘The threats and phone calls and online abuse have also strongly been about vaccinations.’

But Ms King will not be deterred. ‘This isn’t going to stop me encouraging people in our community to get vaccinated. 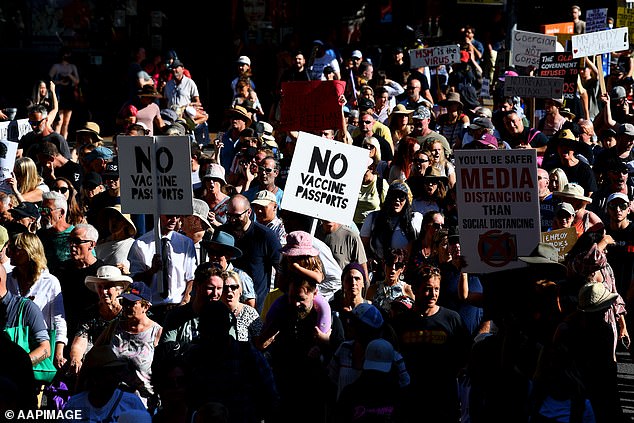 Anti-vaccination protesters gather for a rally in Brisbane on Saturday, August 21, 2021

‘My only goal is to make sure that when Covid comes to our community, and it will, that we don’t see local people in hospital, in our ICUs or worse. And I don’t want to see our health workers overwhelmed either.’

She said would rather be talking about the roads and hospitals the state government is building, but the most pressing issue right now is that people get vaccinated.

‘We’ve had so many phone calls and messages of support right across the community, people have been wonderful.

‘Our community is so much better than this. This is a small number of people,’ she said. 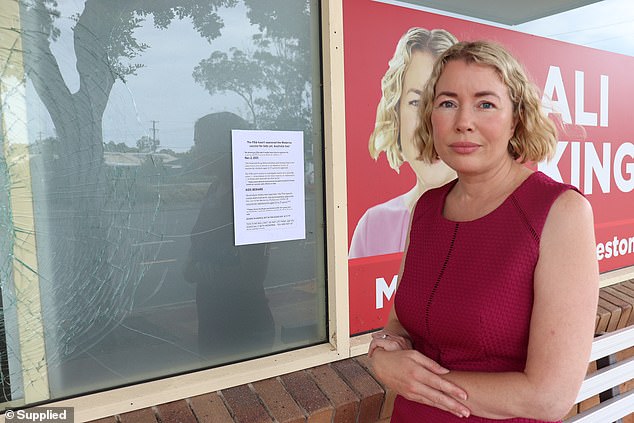 Queensland MP Ali King, whose office was attacked by an anti-vaxxer, says online conspiracies can have read life consequences

‘They hurt people in their health and they can lead to violent consequences as well,’ she said.

Her electorate, Pumicestone, has the highest median age in Queensland.

‘Covid would be incredibly dangerous to our community if we got uncontrolled outbreaks. We are so lucky to have a safe vaccine available,’ she said.

The alleged offender was issued with a notice to appear at Caboolture Magistrates Court in December.

As of Sunday, 82.8 per cent of Australians over 16 are fully vaccinated with 90.3 per cent having had at least one dose.