More than 200 people who have been ordered to self-isolate under Queensland’s strict quarantine laws have gone missing, it has been revealed.

Police said 210 people who are currently unaccounted for are wanted for questioning and will face fines for breaking stay-at-home laws.

The COVID-19 taskforce has conducted 2,000 compliance checks since mid-April and found 400 people in breach of quarantine rules.

More than 200 people who have been ordered to self-isolate under Queensland’s strict quarantine laws have gone missing, it has been revealed  (pictured: Police stop motorists crossing the Qld-NSW border)

Of those, 185 people had deliberately given health officials incorrect contact details, such as the address they would stay at during isolation.

Police confirmed 35 people had been fined after they were found in the wrong place, with 125 people leaving Queensland when they were supposed to be isolated at home.

Another 25 people had provided the correct information to health officials but when police arrived to conduct a check, they were nowhere to be found.

The taskforce found 17 people at different addresses than the one they had provided to authorities, but they weren’t fined as they had relocated due to family problems or an expired lease.

These people were given new orders and addresses as they are still required to self-isolate.

Police said the number of people found flouting the rules was relatively low but they are putting the rest of the community at risk. 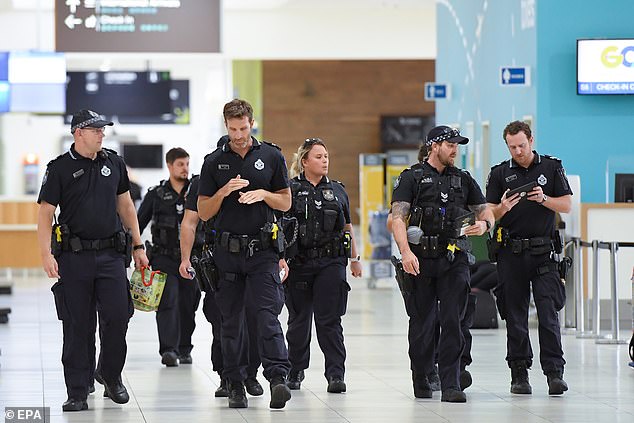 Police said 210 people who are currently unaccounted for are wanted for questioning and will face fines for breaking stay-at-home laws (pictured: Police at the arrival terminal at the Gold Coast Airport)

Queensland Police Union president Ian Leavers said people who provide authorities with the incorrect information or disappear from self-quarantine should be banned from the state.

‘What they’ve done is put our state at risk and not only the safety of our people but also the economy, it goes hand in hand so my view is, let’s look at changing legislation and deport them to New South Wales, they don’t deserve to be here,’ Mr Leavers told the ABC.

‘This is really serious and we’ve got to get fair dinkum about this and if that means, people want to lie, let’s increase those penalties and if we can, let’s lock them out of Queensland.

‘If you want to enter Queensland, it’s a privilege, it’s not a right. You will follow the laws of the land.’ 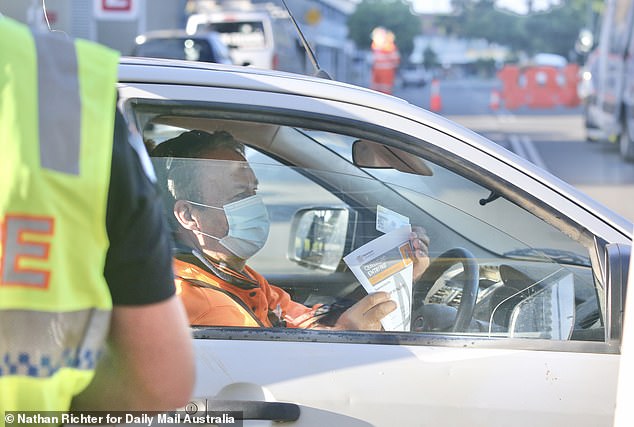 The development comes after a New South Wales man was fined when police caught him trying to sneak across the Queensland border in the boot of a car.

The 41-year-old was found by Queensland Police hiding under bags in the boot of a Mitsubishi hatchback at Wallangarra on Sunday night.

Bodycam footage captured the moment police busted the would-be border hopper before slapping him with a $4,003 fine.