Josh Addo-Carr riles up Queensland supporters with over the top Origin try celebration – but can you spot the real reason the footage has fans talking?

A passionate Queensland supporter has gone viral online after her priceless reaction to Blues hero Josh Addo-Carr’s second State of Origin try was caught on camera.

The winger was dominant during NSW’s 26-0 drubbing of the Maroons in front of an embarrassed capacity crowd of 52,000 fans at Brisbane’s Suncorp Stadium.

But as Addo-Carr pointed to his jersey and raced towards the jeering crowd in the 69th minute, one woman dressed in maroon stood out in the background.

An eagle-eyed footy fan spotted the woman raising her middle finger at Addo-Carr and shared footage of the classic moment to TikTok. 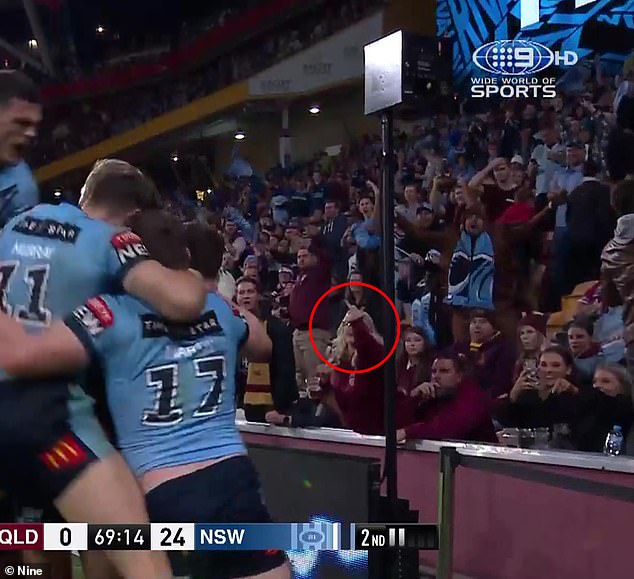 ‘I’m a Queensland supporter but I honestly wouldn’t be that salty when we lose,’ one person commented on the clip.

‘That’s not how you treat a winning team,’ agreed another viewer.

‘I thought I was the only one to see it,’ added a third.

Other viewers joked the woman was acting like a ‘Karen’.

A ‘Karen’ is a term used to describe a middle-aged woman who is self-righteous, sometimes racist, tells people how to do their jobs, asserts their rights and complains to the manager. 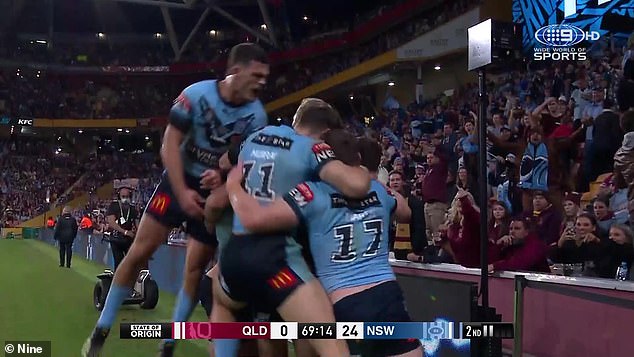 In the most dominant win in Origin Series history, Addo-Carr scored and celebrated the try which left one QLD fan reeling