Queenslanders claim Victorians in caravans are SNEAKING over the border

Beady-eyed Queenslanders have claimed to have seen banned Victorians sneaking into the state, as it finally opens up following 106 days of border closures.

Traffic was already backing up on Friday morning ahead of the eagerly awaited border opening at midday.

Up to 250,000 Australians searching for some winter sun are expected to enter the state over the coming weeks.

But due to the dire situation in Melbourne, with coronavirus infection rates spiking, Victorians will not be allowed in.

Concerned locals have reported seeing cars with Victorian licence plates in the state, raising concerns some may have already snuck in.

Heavy traffic is seen on the Gold Coast Highway hours before the Queensland border reopens at midday on Friday (pictured). All these vehicles were going to an official checkpoint 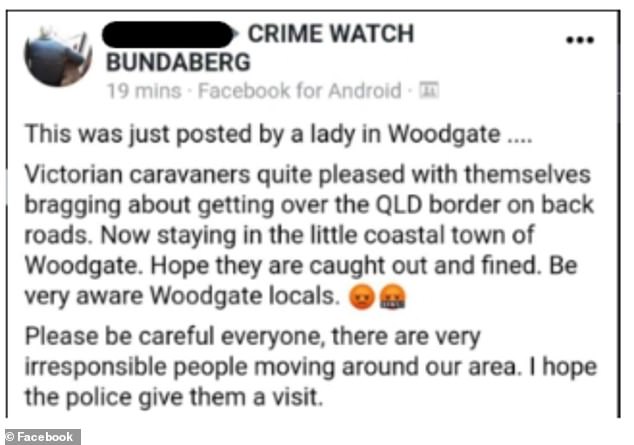 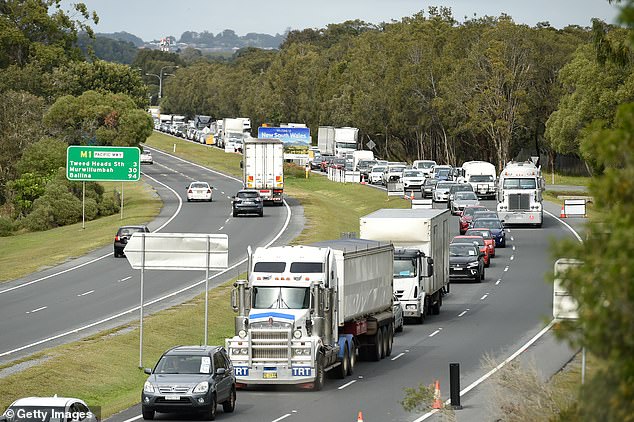 One woman in Bundaberg posted on Facebook saying: ‘Victorian caravaners quite pleased with themselves about getting over the QLD border on back roads

‘Now staying in the little coastal town of Woodgate. Hope they are caught out and fined.

‘Be very aware Woodgate locals. I hope police give them a visit’.

But police have rubbished the claims, saying the number plates are likely of people already travelling in Queensland before the border shut, or locals using rental cars.

‘Just because someone sees a vehicle with a Victorian registration plate travelling down the highway doesn’t mean to say that they should not be in the state,’ Childers police sergeant Geoff Fay told the ABC. 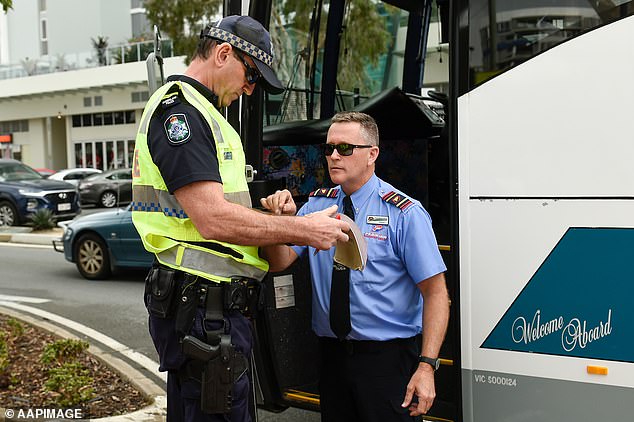 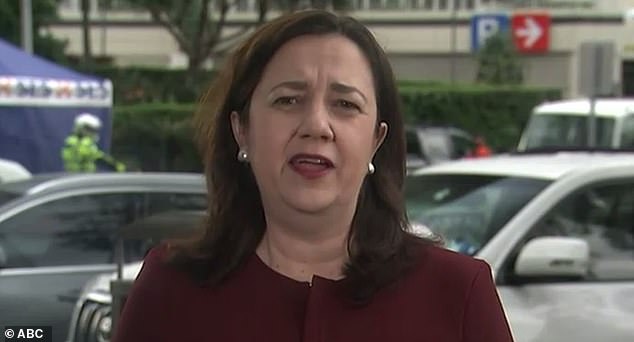 Annastacia Palaszczuk (pictured, on Friday) has warned southerners they ‘could be sitting in traffic for hours’ as authorities carry out coronavirus screenings on Queensland’s borders

‘We conducted patrols of the Woodgate Caravan Park. We spoke to the management, and we were able to verify that all of the vehicles in that park with Victorian plates were lawfully in Queensland.

‘Some were hire vehicles which had been hired out of Brisbane by Queensland residents … other people had been in Queensland for two and three months before COVID-19 had started.’

Premier Annastacia Palaszczuk sent out a stark alert on Friday to eager travellers looking to descend on the Sunshine State, warning of huge traffic jams. 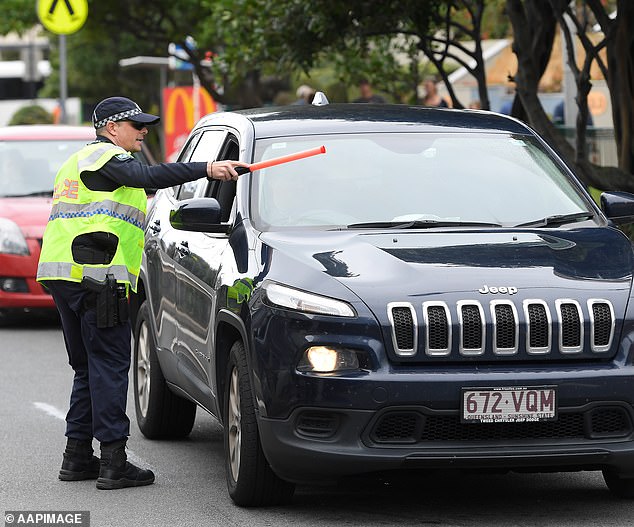 The Queensland premier made it clear that when the state’s borders reopen at midday on Friday, southerners ‘could be sitting in traffic for hours’ as police, military and medical authorities carry out coronavirus screenings.

The border has been shut since March 26, with only essential workers allowed to move into the state.

‘Patience will definitely be a virtue today,’ Ms Palaszczuk told the ABC’s Breakfast program just hours before the July 10 reopening.

‘We know there will be lengthy delays.

‘I have been saying all week to everybody, please plan your journey. Don’t be rushing across the border today because you will be sitting in traffic for hours.

‘If you can delay your journey, delay it.’

Although seven of Australia’s eight states and territories will be able to plan their next getaway in Queensland, Victoria will not be receiving an invitation. 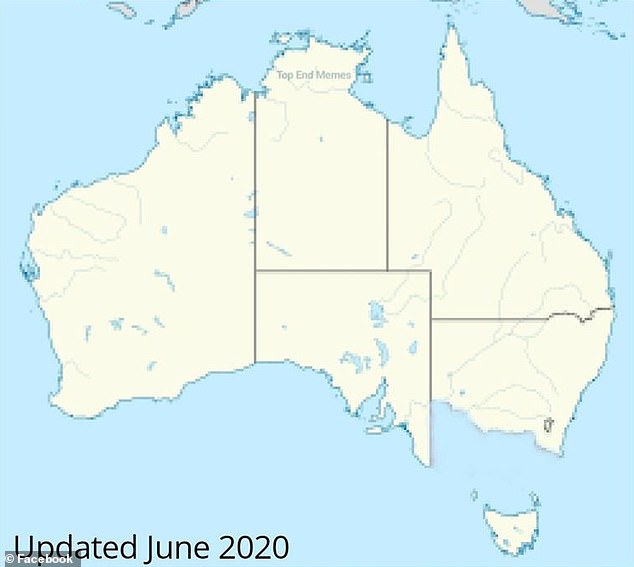 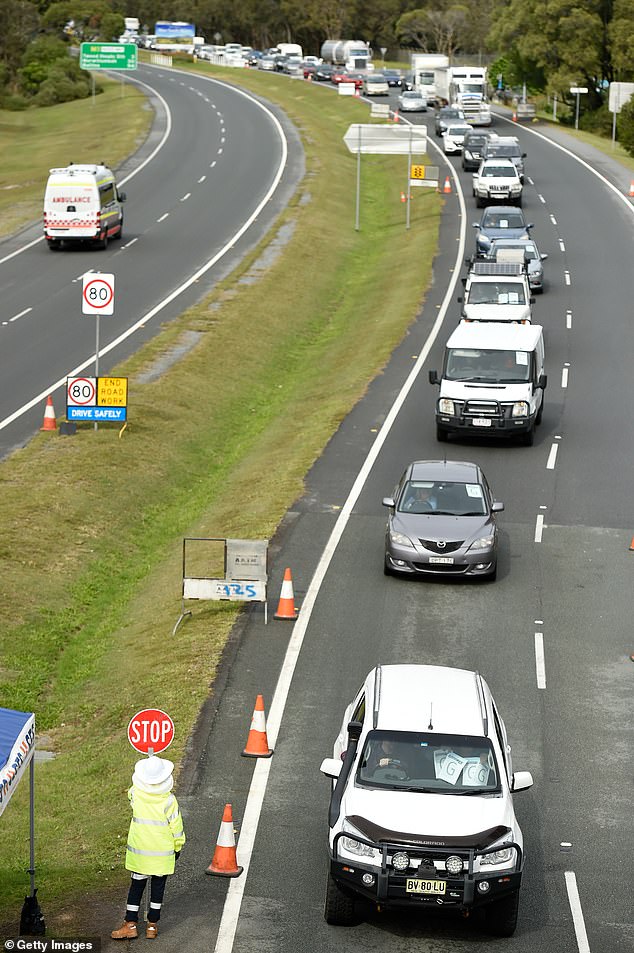 To enter Queensland all travellers by air, sea or road will need to have their online border declaration checked by police (pictured on Friday ahead of the border opening)

In the past seven days, there have been close to 800 confirmed cases of the deadly virus mainly centred in Melbourne’s northwest.

‘All the other state’s and territories have not seen large-scale community transmission so that means people are free to come here, but if they show any symptoms they will have to submit to a mandatory test because we want to keep the great state of Queensland COVID-free,’ Ms Palaszczuk.

‘We know Victoria is going through a hard time and my heart goes out to everyone in Victoria.’

To enter Queensland all travellers by air, sea or road will need to have their online border declaration checked by police.

One of the questions on the application asks if you have entered the state of Victoria in the past 14 days. 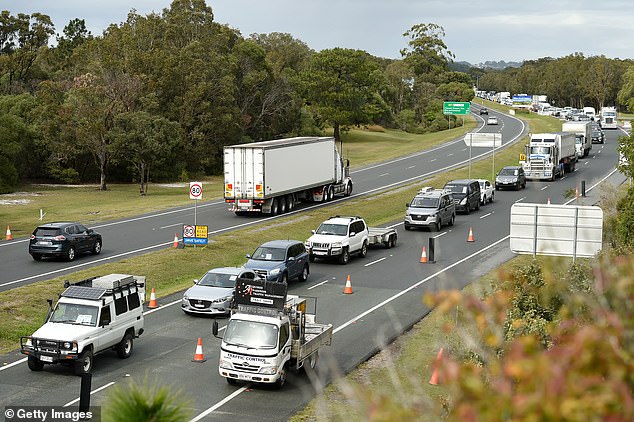 If you elect yes, you will not be allowed entry.

The only exceptions are for residents, a students or someone fleeing harm.

But anyone caught giving false information on the form could be hit with a hefty fine between of $4,004 for individuals and $13,345 for companies.

‘Don’t think that you’re going to be able to get through here if you are going to be lying or declaring a false declaration you will be fined,’ the premier said. 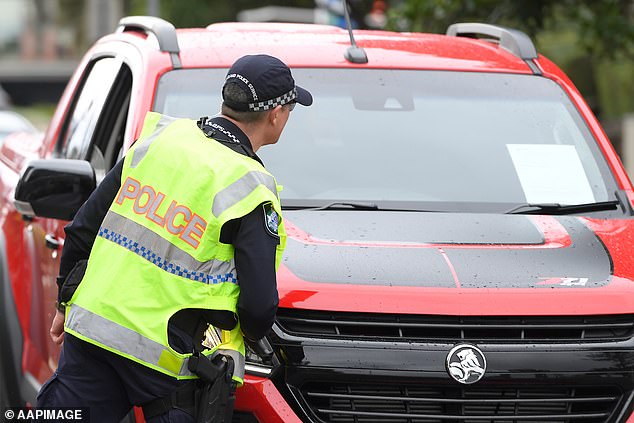 ‘They will still be able to do that but we will be randomly intercepting them to make sure that there are…not people getting through there that shouldn’t.

‘We’ve already had people try and test the system all the way through, so we’re just going to make it really certain that people aren’t doing that.’

Queensland have recorded only two confirmed coronavirus cases in the past three weeks. It recorded no new cases on Friday. 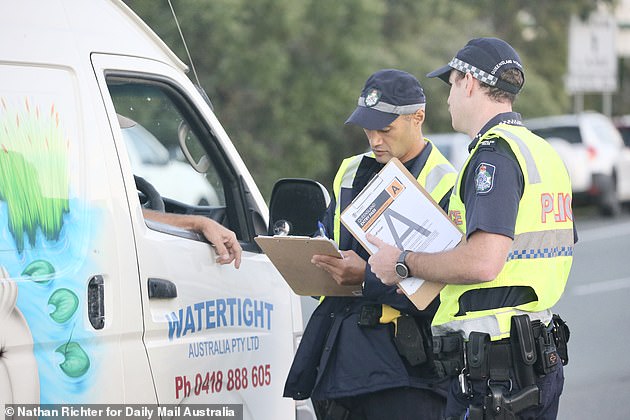 Anyone travelling from Victoria into Queensland will be fined $4,000 if they lie to police (pictured, border checks)