Another urgent question/ministerial statement on Brexit. Yesterday morning’s followed a minor to-do on Wednesday about whether or not or when MPs might get to vote on any deal Theresa May wants to do with Brussels.

That rumpus was for purists and obsessives only.

If I tried fully to report it, two things would happen: first, you would become so bored, you would never glance at this column again; second, my optician would have to sharpen her scalpel to uncross my eyes.

Brexit debates have become so Groundhog Day-ish you could simply write the same report each time. It might go something like this: Labour frontbencher Sir Keir Starmer: ‘This is not good enough. The Government is in a muddle. In case you hadn’t noticed, I’m a lawyer’

Yesterday’s urgent question, likewise, will have been relished only by those with an aptitude for the upper slopes of nitpickery.

It was sought by shadow Brexit secretary Sir Keir Starmer, granted pronto by Speaker Bercow and answered by Brexit Secretary David Davis. All that, and much of what followed, was predictable.

But otherwise, the same old porkers trotted out the same old honks and gripes. Our parliamentary class is still in the most frightful bate about Brexit.

What happened last June, when that referendum vote was held, was that Parliament was rendered secondary to the People.

And there is no way they can escape that vote, no matter how much they kick and moan and try to insist on being given their groat’s worth.

Brexit set-pieces in the Chamber have become so Groundhog Day-ish – as yesterday’s was – that we could save Parliament a fortune in Hansard bills and just print the same report every time.

It might go something like this: Labour frontbencher Sir Keir Starmer (hair scraped back, eyes as startled as a man who has just swallowed a vindaloo onion, whole): ‘This is not good enough. The Government is in a muddle. In case you hadn’t noticed, I’m a lawyer.’

David Davis, sighing and leaning on the despatch box in a world-weary manner: ‘I hope he knows me well enough to accept my word. There’s nothing to worry about. Brussels’ Michel Barnier and I go back a long way.’

Dominic Grieve (Con, Beaconsfield): ‘Ab initio Brexitus not to my tastus. A fortiori in arguendo uno flatu veto, or I’ll tell my munchkins Bob Neill and Nicky Morgan to vote with Labour. I’m a lawyer too, you know.’

Hilary Benn (Lab, Leeds C): ‘Should we not just accept everything the Europeans want us to do? And if the minister doesn’t agree with me, I’ll summon him to another meeting of the Brexit select committee I run.’ 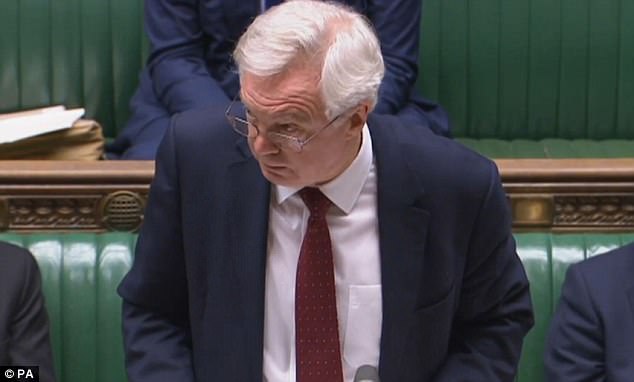 To which David Davis might respond: ‘I hope he knows me well enough to accept my word. There’s nothing to worry about. Brussels’ Michel Barnier and I go back a long way’

Ben Bradshaw (Lab, Exeter): ‘I’m going to stamp my feet and pout until they cancel Brexit.’

Philip Hollobone (Con, Kettering): ‘The people of Kettering have spoken and they will not be happy bunnies if Parliament tries to stymie Brexit.’

Pointless and sarcastic intervention by The Speaker.

Nicky Morgan (Con, Loughborough): ‘The Government should accept every amendment proposed by my Rt Hon and Learned Friend Dominic Grieve. He’s much cleverer than I am, by the way.’

From the Scots Nat benches Joanna Cherry, a sturdily-tweeded lassie of amphibian aspect, spoke at length. Her contribution was so dull that for its duration the rest of the House seemed frozen to the spot.

The only thing anyone could remember, that she mentioned the word ‘Scotland’ several times, and seemed cross.

Sarah Wollaston (Con, Totnes): ‘As a doctor, I am often asked what I think about Brexit. And I have to tell people, I don’t know. So long as I sound saintly, that’s all that really matters.’

Desmond Swayne (Con, New Forest W), exploding from a near horizontal position: ‘Have you all gone completely MAD?’

Okay, I exaggerate. But not much.