As in previous Budgets, the Chancellor adopted the persona of a tough-guy wise-cracker, a comedian with partisan swagger. The jokes! The political barbs! He lodged tongue in cheek – he really did – as he leaned on the despatch box to impart another wooden zinger. If he only put as much effort into Brexit as he does into his Budget performances, we’d have been out of the EU by now.

He referred to himself in the third person. Phil this and Phil that. ‘Fiscal Phil says Fiscal Rules OK!’ he crowed. Silence in the House.

After observing that this was the first Monday Budget since 1962, he explained he could not have held it in December because ‘I am sure the headline writers were ready with ‘Spreadsheet Phil turns Santa Claus’.’ Cold stillness filled the Chamber. He said he could not have held the Budget on Wednesday, just before Hallowe’en, because the same headline writers were ‘desperate’ to splash their newspapers with ‘Hammo House of Horrors’.

Hmmn. There was possibly only one person ‘desperate’ here.

This was a vain and aggressively political Budget. The opening 30 lines of a Budget always contain political hyperbole but yesterday it felt unusually heavy-handed. He claimed that Conservative spending cuts were ‘not driven by ideology’ (cue yelps of disagreement from the Labour side). ‘The strivers, the grafters and the carers – this Budget is unashamedly for you,’ said Mr Hammond. That ‘unashamedly’ left a tang.

As he stood at the despatch box, vulpine, licking his lips with self-pleasure, he plainly thought himself the dog’s dandies. It was not an opinion universally shared. The Conservative benches listened with something more than neutrality but less than rapture. They were possibly just grateful to have a break from Brexit.

To hear Hammond, one of the most cynical founts of Project Fear, claim he was ’embracing change’ was enough to raise a mordant laugh. He also claimed to be speaking for ‘hard-working families who care little for the twists and turns of Westminster politics’. Ha! Few are sneakier at those games than P. Hammond.

Before he began there was a minor moment of farce when Liz Truss, Treasury Chief Secretary, was denied a front-bench seat by two men – David Lidington and Mel Stride – and huffily stomped off towards the gangway, only to be beckoned back by Theresa May. Sajid Javid had made room for her.

‘Chivalry is not dead,’ chuckled Deputy Speaker Lindsay Hoyle. As ever, the Budget was chaired by him and not by the Speaker. The moment Speaker Bercow departed and Mr Hoyle took his place, MPs cheered. Mr Hoyle oversaw proceedings generally with tact and humour, although he shouted when Labour and Scots Nats MPs stood and (against convention) clapped a protest by female pensioners in the Strangers’ Gallery. Gallery protests are a bit pointless these days because the bullet-proof glass now makes them inaudible. We could see these women bawling but not a word of it could be heard. It was like a pre-talkies movie.

Behind Mr Hammond sat his aide Kwase Kwarteng, itching at Labour jibes. Not all Opposition MPs were agitated. Sir Keir Starmer, Shadow Brexit Secretary, rested his eyes like Butch the bulldog in Tom and Jerry. The best moments were when Mr Hammond detailed drops in public debt. The worse was a protracted announcement about public lavatories, full of puns about ‘relief’. Mrs May groaned. 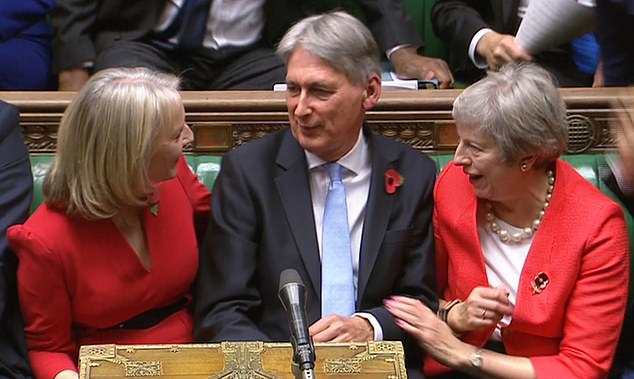 If Mr Hammond’s speech lacked a wallop moment – a moment to electrify his troops – it was because so much of the detail had been flogged to the media beforehand. Also: how wise is it to use that highly politicised word ‘austerity’? All it means is ‘lower spending’.

He admitted, archly, that although it was usual to have ‘a rabbit or two in the hat, this year some of my star bunnies seem to have escaped!’ Ho ho. And yet, he claimed that he could still ‘poach a rabbit’, and announced some low-key stuff about health spending. A Labour heckler felt that far from being a rabbit, this was ‘a dead dog’. That won a bigger laugh than some of Mr Hammond’s tortuous drolleries.

When he said he would review some policy at his next Budget, a Labour MP (I think Paula Sherriff from Dewbsury) shouted: ‘You won’t be here!’ Big laugh. Mr Hammond countered with an extempore remark along the lines that people had written him off before but he was still standing. Malvolio shaking his fist and swearing vengeance. Just you see!

There was a flash of defiance in that moment, not quite sour but certainly tinged with bloody-mindedness. A limited man remains convinced he is a titan.