A few seconds after 9pm, Sir Graham Brady announced that the parliamentary party ‘does have confidence’ in Mrs May’s leadership.

A claque of May-ites in the room clambered to their feet and cheered, clapping hard for the benefit of the TV camera in the middle of committee room 14.

Two hundred ayes to the right, 117 noes slightly further to the right. One ruling party riven..

A gut-watering day had begun just over 12 hours earlier when Mrs May stepped into the London morning’s drizzle to confirm she was 75 per cent limpet.

She came out of the No 10 Downing Street door all in blue, even her eyes lightly shadowed turquoise. Gosh, she looked thin.

Performing at a wooden lectern in front of an enormous Christmas tree, she said the 48 letters of no-confidence had now been received and she would be contesting the matter ‘with everything I’ve got’.

The echo of street-fighter slang cut a contrast with her luxuriant jacket and a fastidiously coiffed hairdo. ‘I stand ready to finish the job,’ she averred, voice creaking at the stays.

This was live-time history, unravelling as the nation went to work. For her it must have all been too horribly real – she stood there as a diver on the top board, politically almost naked. By the end of the day she was stronger but maybe not much.

For three hours after that early street speech, Westminster went all food-mixer, a vortex of electronic gossip and broadcasters’ arc lights while brollied pedestrians trudged past Parliament’s palisades.

The hubbub abated only as MPs surged towards the Commons chamber for PMQs. On such a day the lady had to face the House? Parliament is a merciless cockpit.

Mrs May was cheered – by both May-ite Tories and Labour – as she edged to her seat at 11.57am. Down at the more Brexity end of the Tory benches, few showed much pleasure at her arrival.

One stooge determined to honk his support was Culture minister ‘Sir’ Michael Ellis (Con, Northampton N), the greasers’ greaser, flagorneur extraordinaire. He is not really knighted but it can but be a matter of time. 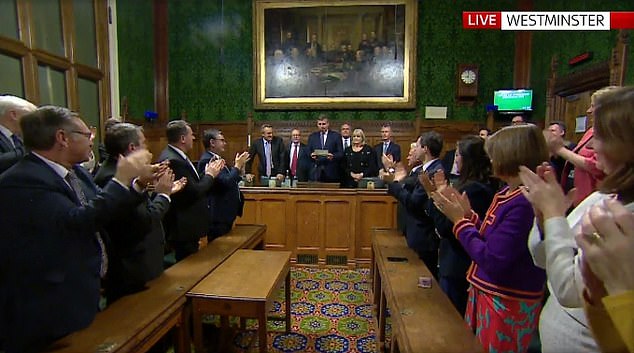 At 9pm, Sir Graham Brady announced that the parliamentary party ‘does have confidence’ in Mrs May’s leadership

Ellis was sitting on the floor in the gangway and kept whacking his furled Order Paper on his knee and bellowing approval for Mrs May, his lips pushed into a pert trumpet.

Premiers usually open PMQs by saying they have had meetings and will have further such meetings today. Mrs May varied this a little to say she would have ‘perhaps many meetings!’

It was a rare, judicious touch of levity that acknowledged her perils. ‘Just a normal day in the office, then, Prime Minister,’ retorted Labour’s Kerry McCarthy (Bristol E).

In those first, uncertain moments of the session Mrs May cast her eyes to the galleries, searching. Then she spotted him: her husband Philip.

Jeremy Corbyn, after welcoming her back from ‘her little journeys’ in Europe on Tuesday, lost his temper over her ‘contemptuous’ and ‘appalling’ postponement of the Commons vote on her deal.

Mrs May claimed she had ‘made some progress’ with the EU. The House jeered.

Junior ministers had been dotted round the Chamber to amplify support. Michael Gove, seldom seen at PMQs, was on the Government bench. 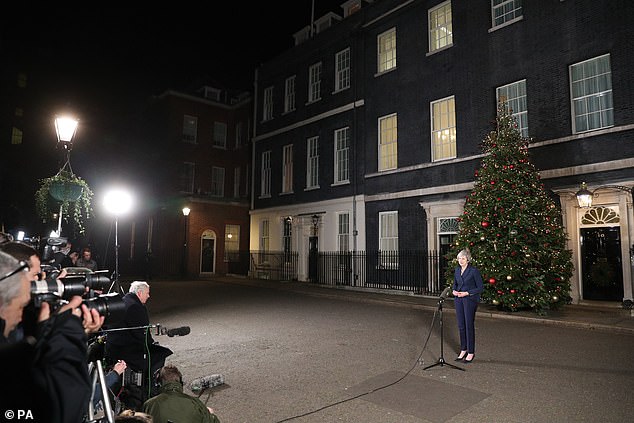 By the time PMQs ended, May supporters felt chipper. No Tory critics had tilted against her. Neil O’Brien (Con, Harborough) had whipped up some hullabaloo in support of her. Only eight hours now till the knee-squeezing result.

We heard that suspended sex-text MP Andrew Griffiths was going to be allowed to vote. A vicar’s daughter must accept help where she can find it.

At 5pm she swept into a committee room steaming with Tory MPs, to make her pitch. ‘Good morning,’ she began. 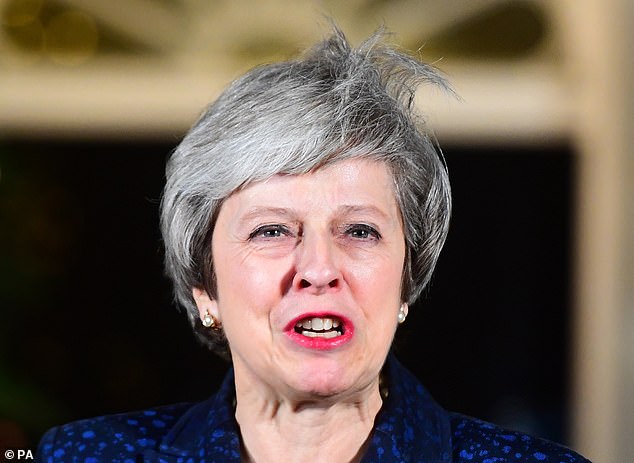 We were told the mood was melancholy, awkward, even tearful for some. After 45 minutes Mrs May swept away, a grey bob disappearing in a sea of aides and squawking scribes, bleakly determined.

The count – of just 317 ballot papers – took an hour. Moments before 9pm, Chief Whip Julian Smith shimmered in, a smile playing at his lips. A junior Whip squeezed his forearm. Another maelstrom had been negotiated.

When Sir Graham uttered the result, that man Ellis again was to the fore, spanking his palms together over his head. He looked delighted. Mrs May and her people, when they examine the numbers, may feel a little less ecstatic.