QUENTIN LETTS on John Bercow: It was Bill Clinton at his most hammy

Bercow cornered, red-eyed, in a bare-fanged fight to stay, stay, stay in the Chair. The scandal-flecked Speaker of the Commons, who has now been accused of calling Cabinet minister Andrea Leadsom a ‘stupid woman’, made a brief statement late yesterday afternoon.

What followed was a part-admission, a demi-concession, a grudging acceptance that, yes, all right, if you really want to know, he had indeed used ‘the adjective “stupid”’. And so what if he had? He would use it again! He was in charge here, so don’t you forget that.

Hair askew and a pair of nascent sideburns on his chops, he began by reminding MPs that last Wednesday the Government had bitten time out of an opposition day in order to bring a major statement on transport policy to the House.

That was not unprecedented yet Mr Bercow said he had been outraged by the decision. It had simply been his anxiety to protect the House of Commons that he had erupted with anger. He claimed.

The Government’s actions that day had been ‘disrespectful’ to MPs, said this Speaker who has so often bawled at them. ‘It was,’ he said, ‘in that context – and in that context alone – that, having expressed my displeasure about the matter quite forcefully from the Chair, I used the word “stupid” in a muttered aside.’ 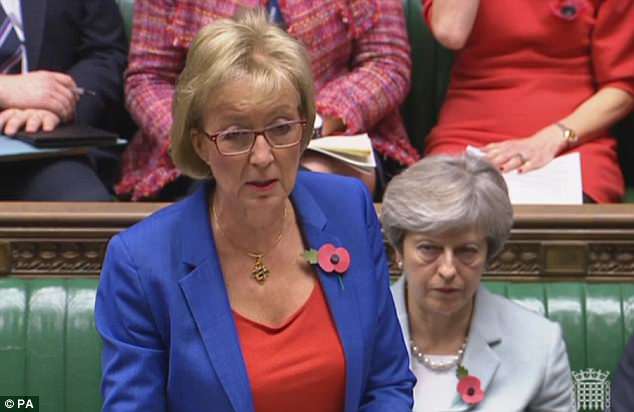 Special emphasis, even menace, was placed on the words ‘and that context alone’. Spot the disingenuousness.

He admitted saying ‘stupid’ but not ‘stupid woman’. For that would cost him Labour support.

He kept pausing in a theatrical manner, to pump his lips. It was Bill Clinton at his most hammy. He looked to the Labour benches more than he did to the Conservative benches. They were accorded little more than a couple of flicked glances.

‘That adjective,’ he continued, ‘simply summed up how I felt.’ He touched his chest. Le Speakership, c’est moi.

A patronising smile. Anyone who knew Mrs Leadsom, he said, ‘will have not the slightest doubt about her political ability and her personal character’.

These words were uttered out of the right side of his mouth. That was as close as he came to complimenting the woman he had called ‘stupid’. Actually, his words, on paper, convey no compliment. 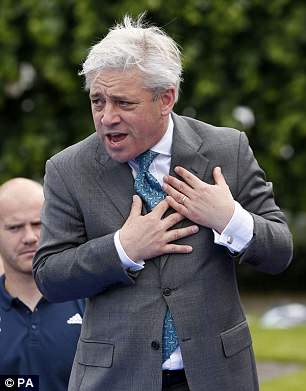 You could read them and interpret them as an insult. He will have known that but he perhaps hoped the House would not notice. Upping the volume, Mr Bercow turned to his favourite subject – himself. ‘I love this House.’ A double blink.

Another am-dram’s pause. ‘I respect all of my colleagues. I hold you all in the highest esteem.’ Ha! If this Speakership has had a theme in the last nine acrimonious years it has been Mr Bercow’s conviction that he is a great deal cleverer than anyone else and that the Tory benches are full of pliant baboons.

‘For my part,’ he continued, again touching his chest, ‘I shall continue to speak out firmly for the interests of the whole House. If, from time to time, it invealvues* publicly disagreeing with the Government’s management of business, then so be it.’

And with that subtle message that he intended to continue in his role, and another goaty smile, he sat down. Though I have long regarded Mr Bercow as an unlovely figure, it was sad to see the Speakership so reduced.

She said that she took her duties as Leader of the House with the highest seriousness and that MPs should treat one another with ‘courtesy and respect’. 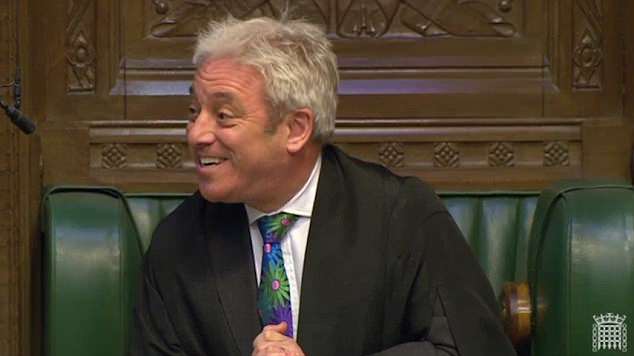 Bercow cast his eyes high to the left, away from Mrs Leadsom, as she was saying this. Mrs Leadsom was surrounded by Tory women. If there was a catch in her voice, who can blame her?

She has to work daily with this foot-stamping oaf. And he wasn’t even grown-up enough to say sorry to her in public.

(*The word was ‘involves’ but this is how he said it.)