QUENTIN LETTS on Labour failing to capitalise on the fishing setback

Why had Melanie Onn (pictured) not been leaping up and down about her fishing constituency’s interests for the past fortnight?

With our fishermen again being chucked overboard by civil servants and ministers (when it comes to fish catches, the latest transition deal on Brexit stinks like an iffy oyster), you might have thought Labour would grab an Urgent Question on the May Government’s fisheries policy.

But Jeremy Corbyn’s lot aren’t much fussed about the fishing industry, or what’s left of it since Ted Heath’s betrayal in the 1970s.

Fishing types? Eek, they tend to be self-sufficient, pro-Brexit and salty about the elite. Officials find such superb people hard to understand. And so the fishing setback went almost ignored in the Commons yesterday and we instead had Urgent Questions on Russian money laundering, the Customs Union (another Hilary Benn moan-in) and data protection. What an odd definition they must have of ‘urgent’ in the Speaker’s office, where such questions are awarded.

Why had Melanie Onn (Lab, Great Grimsby) not been leaping up and down about her fishing constituency’s interests for the past fortnight, since it became clear the Brexit transition deal was going to be feeble on fishing?

Why had she not been making points of order, seeking urgent debates under Standing Order 24, boinging to her feet at Prime Minister’s Questions and generally doing everything to prevent a sell-out on fishing? Instead, she secured a Westminster Hall debate on, er, wolf-whistling. Meanwhile, it was left to Scots Tories to make the headway on fishing. Ms Onn’s predecessor, Austin Mitchell, who changed his name by deed poll to Captain Haddock, would never have let himself be outmanoeuvred like that.

The most we heard yesterday afternoon from Ms Onn was an under-powered, half-swallowed question about fish-processing, and whether or not ‘our fish fingers would be safe’ after Brexit.

Mel Stride, a Treasury minister, offered suave reassurance that the nation’s fish fingers would indeed be safe in the Government’s hands. Mr Stride knew he had only to make a meaningless little half-joke of it to bat away the feeble Ms Onn. Ms Off, more like.

The money-laundering question was brought to the House by Shadow Chancellor John McDonnell, who has been trying to repair some of the damage done to Labour’s reputation for patriotism last week by Jeremy Corbyn’s half-hearted stance on the Russia controversy. Mr McDonnell, who is a little more skilful than Mr Corbyn at parliamentary dances, may have sensed that pushing the row towards money-laundering oligarchs would allow moderate Labour MPs to support their own frontbench. 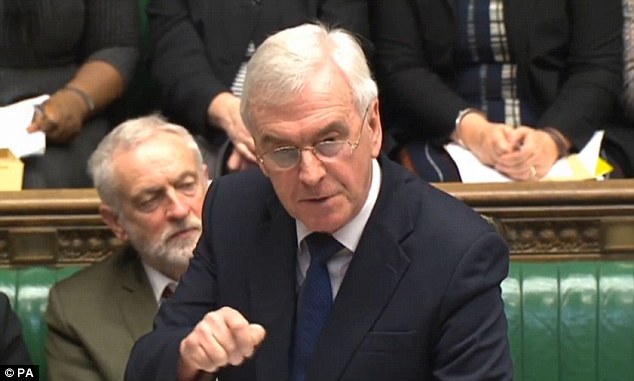 At the despatch box stood – or rather crouched, his shoulders oddly hunched – the security minster Ben Wallace.

Ex-soldier Wallace is pretty well-liked by the House but he maybe rushed his shots a little yesterday. He opened with such a long list of policies he said the Government had introduced to prevent dodgy oligarchs that Speaker Bercow had to interrupt him and urge him to remember to breathe. It was characteristic of Mr Wallace’s jocular and unaffected way that his response to this was to do some heavy panting at the microphone.

Labour MPs kept wanting to know why our prosecutors and police were not going after various Russians named Igor and Dmitry and so forth (the surnames were a nightmare for the Hansard stenographers). Mr Wallace’s answer was that in Britain, politicians do not tell Plod or the director of prosecutions what to do.

Although a perfectly correct answer, this did not quite persuade the Chamber. Is it not possible that in the past ministers have murmured quietly into the law-enforcers’ ears to go easy on rich Russians, so long as they did not bring their murderous ways to Britain? If so, that informal arrangement may be at an end.