For Lib Dem activists there was good and bad news. The good news was that Tim Farron MP stirred their milky innards with a fluent, self-effacing, stage-strolling speech.

The bad news was that lay preacher Farron, who set about them with pointed forefingers and half-crouches and a bared set of upper gnashers, is no longer their leader. Instead they are led by doomful donkey Sir Vince Cable, aged 105.

Sir Vincent, whose pendulum swings at half-speed, will make his debut leader’s speech to the conference in Bournemouth this afternoon. Will he excite the activists as much as Mr Farron did yesterday? 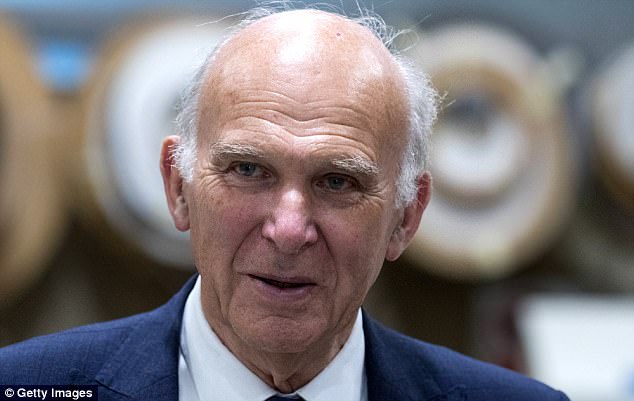 Instead they are led by doomful donkey Sir Vince Cable, aged 105. Sir Vincent, whose pendulum swings at half-speed, will make his debut leader’s speech to the conference in Bournemouth this afternoon

Monday morning had got off to a treacly start: a debate about benefits payments. We heard that ‘the evil Tories’ were not giving the needy their benefits quickly enough and that Labour was too ‘apathetic’. Talking of which, the hall rattled with perhaps 100 attendees.

One speaker, poor chap, was in the process of telling us how he had been homeless when a raised voice came from one of the entrances. The speaker thought he was being heckled.

In fact it was that fool Paddy Ashdown making an entrance, shouting morning pleasantries to another party member.

Lord Ashdown found a seat, left it, found another, left that, found yet another… Well, you get the idea. What a fidget. He loves the attention he creates. Vanity in one so long in the fang. Pitiful.

A debate on anti-terrorism laws was more interesting, betraying differences between civil-liberties types and activists who felt the Government should be allowed to look at the citizenry’s telephone and internet records. 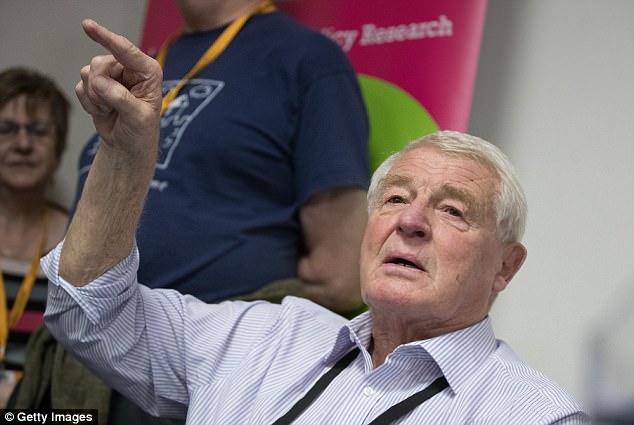 Former Liberdal Democrat leader Paddy Ashdown interrupted a speaker who was discussing his homeless experiences, with his entrance

Sir Ed Davey MP made a blowy speech, claiming that the Schengen open-borders policy helped to keep us safe from terrorism. A man with a beard sympathised with the ‘injustices’ which fuelled terrorism.

Attacks only happened because Britain ‘turned a blind eye to killing and torture’ abroad, he claimed.

A school teacher said the authorities had been told about a child whose block of wood in carpentry class seemed to say ‘Islam’. Only on closer inspection did they discover it actually said ‘15 cm’.

A former worker at the Government’s surveillance centre GCHQ in Cheltenham (once a Lib Dem seat) attacked the party’s desire to dilute the Prevent programme which monitors suspects.

He called this drift in Lib Dem thinking ‘nonsense … laughable … simplistic and utterly naive … a calumny on the staff at GCHQ’. When it came to a vote, he was roundly ignored. They paid more attention to their former leader Mr Farron. His pre-lunch speech was the best of a (so far) lacklustre gathering.

He recalled that he was recently approached by ‘a lady half my size yet still able to look down her nose at me’ who told him she would ‘never trust a man who wears Dr Martens shoes’. 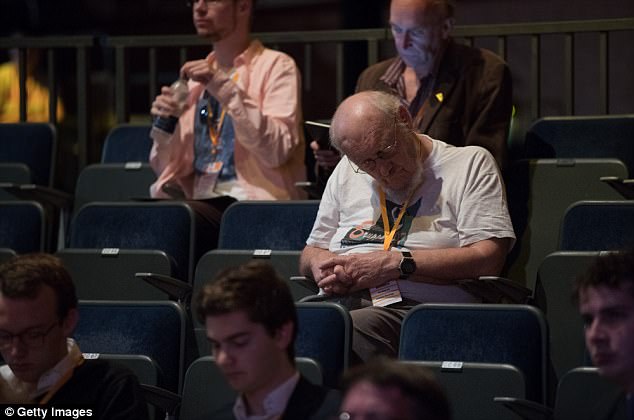 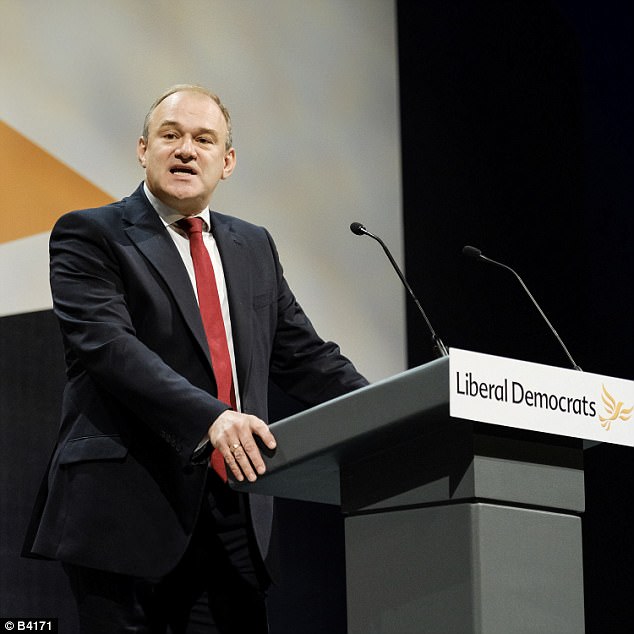 Sir Ed Davey MP made a blowy speech, claiming that the Schengen open-borders policy helped to keep us safe from terrorism

Mr Farron said his choice of footwear was the only thing he regretted from his leadership days.

His message to the activists was a simple one: ‘Do not give up.’ He added: ‘I’m not going to give you a long list of advice. I’m not Paddy.’

That earned a strong laugh. Perhaps Lib Dems are as sick of Lord Ashdown’s posturing as the rest of us. Mr Farron paid elaborate tribute to Sir Vince.

The more he said what a marvellous leader, the more one was perhaps inclined to wonder why he felt the need to ram this home.

‘Careerism is futile,’ argued Mr Farron, as he noted that some of today’s children do not know who Mrs Thatcher was.

And yet he gave a playful hint that he might stand for the leadership again in 30 years’ time, when he will be no more ancient that Sir Vince is now.

He had a long go at Blairites in the Labour Party, telling them they had lost their party for a generation and should join the Lib Dems.

‘I love you,’ he gasped. Sobs all round!