QUENTIN LETTS on yesterday in Parliament

Diane Abbott was standing by the Speaker’s chair at the start of PMQs.

From my eyrie I had a clear view of her – and could therefore see her reaction when her party leader and old friend Jeremy Corbyn coughed up his alleged delight at the arrival of the new royal baby. ‘I wish them well,’ claimed Mr Corbyn.

Across Miss Abbott’s mouth flashed an expression of curdled amusement. It was accompanied by a little cough of laughter. Was she signalling the sentiment ‘oh Jeremy, you do tell some wonderful porkies’?

The two main areas of controversy were the Windrush saga and the Government’s position on the EU customs union. Theresa May’s reaction to both was to fall back on safe formulae.

Jeremy Corbyn during Prime Minister’s Questions. He wished the new born royal baby and his parents ‘well’, provoking a reaction of ‘curdled amusement’ in Diane Abbott

On Windrush, she must have said ten times that there was a difference between the legality of the Windrush immigrants and the illegality of certain others – and how the country wanted her to make sure it pursued the latter.

Mr Corbyn aimed to embarrass Mrs May over the ‘hostile environment policy’ run by the Home Office – its attempt to seem tough and thus deter migrants.

Mrs May responded by quoting a remark from the days of the last Labour Government when then immigration minister Liam Byrne (Birmingham Hodge Hill) said he wanted to ‘flush out’ illegal migrants by creating ‘a much more hostile environment’.

This may have been a clever response but Mr Corbyn just ignored it. Par for the course.

After mention of both Mrs May and Home Secretary Amber Rudd, Mr Corbyn screamed: ‘Is it not time she took responsibility and resigned?’ It was not clear who that ‘she’ referred to – Theresa or Amber? Miss Rudd, brightening momentarily, pointed between herself and the PM, as if to say ‘which of us do you want to resign, mate?’

Questions about the customs union came from the SNP’s Westminster leader, Ian Blackford (who does not deserve the rude groans which greet him every week), and a couple of Tory Brexiteers, Richard Drax (S Dorset) and Julian Lewis (New Forest E). Mrs May’s replies on this matter were a little less emphatic than they had been in the past.

But Mr Lewis did eventually get her to say the following: ‘I am very happy to confirm what I have always said – no deal is better than a bad deal. Being in a customs union means we would not be able to negotiate our own trade deals around the rest of the world and we want to be able to do that. 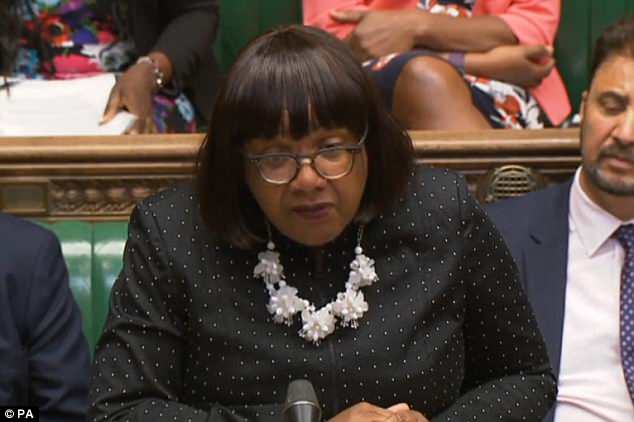 As I saw at the Commonwealth meeting, there is considerable interest around the rest of the world in being able to have those independent trade deals.’ Pin that on your fridge door and let’s see if she keeps to that position in a few months’ time.

Not a single MP asked about the sad case of Alfie Evans, the desperately ill little boy whose family were told by the courts that they must not take him abroad for further medical treatment.

Perhaps it was too distressing a subject for parliamentary debate at this time. But does it not raise unresolved arguments about the power of the state versus the freedom of parents? When that state power becomes caught up with doctors, does this affect how we see medics? Do they become family doctors or state doctors?

Mrs May trotted out a reply about officialdom’s efforts to reduce sugar consumption and to get the populace to take more exercise. It did not, regrettably, tilt a wing acknowledging the philosophical boundaries to this sort of state power.

To what extent should politicians control what the public eats, or indeed what we may do to secure our children medical help? There may be no easy answer but it would at least be good, just sometimes, to hear a parliamentarian defend personal responsibility and liberty.