QUENTIN LETTS: ‘Slim’ Boris’s trousers sagged like a flag on a windless day

‘Slim’ Boris Johnson’s trousers sagged like a flag on a windless day: QUENTIN LETTS on a weighty burst of blond Brexit brio

By Quentin Letts for the Daily Mail

After a week when Remainers have keened like the chorus in an Aeschylus tragedy, Boris Johnson injected some can-do Brexit brio yesterday morning. Let’s grapple with the obstructionists in Brussels rather than with one another, said the former Foreign Secretary. Tell Juncker and Co to ditch their blasted backstop or we’ll sail off without a deal.

Obvious? To millions of us, yes. The only amazing thing is that neither the Government nor Opposition has been saying it. And so it was left to Boris the Bold.

Brrrrr. Frigid is not an adjective one automatically associates with Boris but the JCB plant near Uttoxeter was as cold as a game larder. Even in sports jacket and plump little woolly, I was shivering.

Behind me sat a worker in a short-sleeved blouse, quite unmoved. Staffordshire women are a tough breed – much tougher than the pant-wetters of the London elite who have been jibbering about further cave-ins to the European Commission. You do sometimes wonder how veggie Hilary Benn has enough fight in him to spear his Quorn rissoles of a morning.

A gleaming yellow JCB had been parked behind the small dais from which Boris made his half-hour speech. He was quick to capitalise on the image. After enthusing about JCB’s global success and letting slip some market-sensitive information about the firm’s sales (up 20 per cent), he enthused about how ‘these custard colossi can move almost any obstacle out of their path’. This other custard-topped colossus added that if you engage the wrong gear in a JCB you can accidentally end up with ‘a new entrance in the back of your house’. 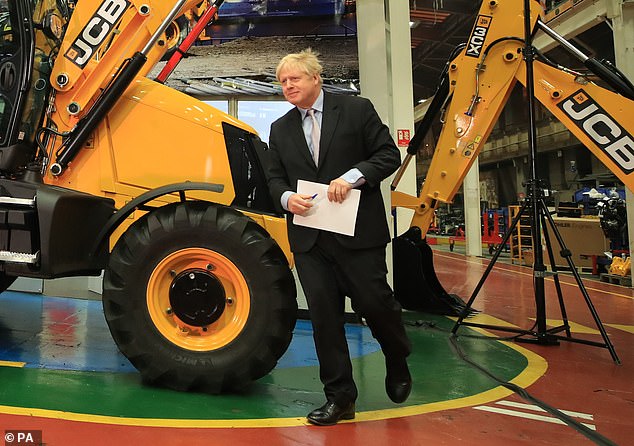 His commendable recent weight loss, which some attribute to a gymnastic new popsy, was evident in his suit trousers. They sagged from him like a flag on a windless day

He feared that might be what the Government does to our national prospects unless it ‘fires up the engines, stops dithering’, points in the other direction and removes a few ‘boulders’ that lie between us and our independence.

Boris said he would be ‘utterly amazed’ if we failed to get an acceptable deal after telling the ‘marmoreal edifice’ of the EU that it is only getting half our 39billion quid until the deal is completed. It was time to ‘stop kowtowing’ to the Europeans. 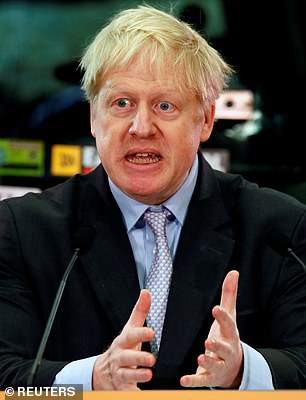 Again, this is hardly innovative. Half the country thinks it an obvious tactic. But how often do we hear a politician or commentator say it?

There is less of Boris than of old. His commendable recent weight loss, which some attribute to a gymnastic new popsy, was evident in his suit trousers. They sagged from him like a flag on a windless day.

Now that he is drinking less, has his voice lost some of its gravelly bottom? A little, I sensed.

The audience of 200 factory hands listened attentively, particularly when Boris gave a hypothetical example of how staying enslaved to EU standards could damage British manufacturers.

A firm like JCB, he said, could invent a brilliant new telescopic arm for its tractors, only to find the EU outlawing the device because it did not want continental rivals to be upstaged. Under many proposals currently being touted round Westminster, such a ban would apply in the UK, even though we were no longer a member of the EU. The audience’s ears pricked at this.

‘That’s not Brexit and that’s not democracy,’ said Boris. There should be ‘nothing embarrassing’ about patriotism. ‘Let’s reinforce our national optimism.’

A couple of the broadcasters accused him of merely making a leadership pitch. Oh, so what? What’s wrong with showing that you have the guts and vision to be leader?

Mrs May has said she is retiring soon. To have the no-deal case put with such vigour actually strengthens her position. It shows the EU that although the Blairites and Lib Dems and Scots Nats and Philip Hammonds are feeble pushovers, at least the real heart of the Tory party still pumps with self-belief and a determination to obey the referendum result.