QUENTIN LETTS watches Theresa May on This Morning

Daytime telly and Theresa May are an odd combination. One grimaces and tacks, the other zooms from doe-eyed concern to pingy frivolity.

Rice pudding and Tabasco, marshmallow with herring: such dishes may not be soulmates yet there can be curiosity value in seeing them together. Yesterday Mrs May appeared on ITV’s This Morning. She forsook the burdens of the Downing Street vicarage for Phillip and Holly’s spangled fishbowl.

She was interviewed between a showbiz gossip slot – the Baftas and Cheryl Cole’s love life – and a segment on household products. Thank you, Prime Minister. Coming up next: loo cleaners. ‘We’ve got some gorgeous guests today!’ cried Phillip or Holly at the top-of-the-show (as we daytime veterans say).

It being Chinese new year, fashion’s Gok Wan was in the kitchen with his no-less insistent brother, a chef. Georgia Toffolo, celebrity person, was interviewed about her spots. We were told how brave she was.

Into this merry mish-mash of a Middle Britain Monday morning waddled our cautious Prime Minister. Presumably she had been through make-up and the green room like everyone else. Small-talk rapids. Usually, anyway. They may yesterday have found themselves becalmed.

‘Theresa May be late,’ Philip Schofield told viewers, ho ho, when the PM’s arrival was delayed. He added: ‘It’s her first time on the sofa!’

On the Graham Norton show that could sound filthy. On This Morning it was innocent, embracing, designed to make the First Lord of the Treasury one of the gang (though she later said she had appeared on the show when Home Secretary).

She perched on the celebrated sofa in an etiquette-school manner, knees together. When David Cameron and Tony Blair did daytime telly, they would ‘manspread’ to radiate nonchalance. Mrs May, more polite and less of an actress, could have been awaiting the dentist. 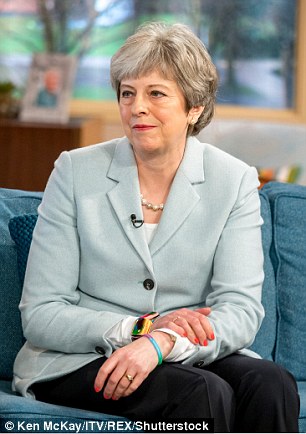 While on the show, the Prime Minister said that university was not for everyone

She began by talking about how there was going to be a year-long review of university fees. Holly tried valiantly to look interested. Phillip was less fussed. ‘Have ya got the money?’ he snapped. Mrs May pulled a face as if to tell him to improve his manners.

University was not for everyone, she said. The ITV duo wondered if you needed a college education to become PM. ‘John Major didn’t go to university,’ said Mrs May.

That was the only one she could think of but nor did Churchill. Or James Callaghan (he could not afford the fees). Or, cough, Jeremy Corbyn.

After a hesitant start Mrs May was relaxing a little. By the usual standards of This Morning, it has to be said, she remained starchy, even when describing the plight of a constituent who had suffered poor mental health.

Daytime telly demands total emotive fluency and brisk repartee. She was handed a rubber wristband to signify opposition to bullying. She could have said ‘I’ll wave that at my ministers next time they gang up on Boris in Cabinet’. But she did not.

‘Are you enjoying the job?’ blurted Phillip Schofield. ‘Yes,’ she said too quickly. A fib? Schofield: ‘Are you sure?’ Mrs May: ‘Yes. I just get on and do it. It’s worthwhile, actually.’ Schofield said she must hate headlines which said she was ‘beleaguered’ and ‘hanging on by a thread’. 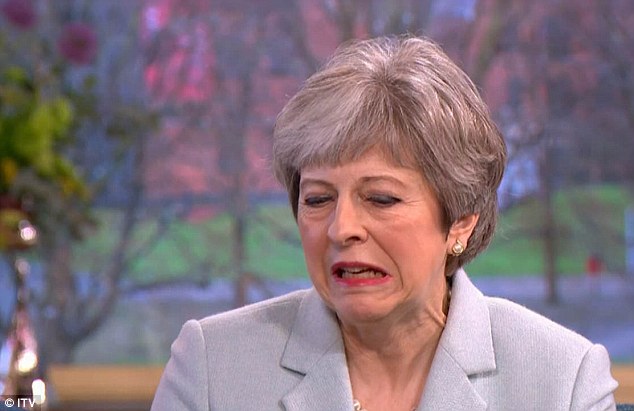 Mrs May said she was on her constituency doorsteps on Saturday and couldn’t give a hoot about headlines. ‘I’m just doing the job and I’m going to jolly well get on and do it.’

Finally, Schofield asked ‘do you ever switch off?’ (his viewers possibly were by now). Did she ever kick off her shoes and order a takeaway? Mrs May did one of those silent laughs, almost devoid of mirth.

They did not come back to her after the break. But I have seen her do worse.