Novak Djokovic swiftly dodged answering questions about his three year ban from Australia he touched down at Dubai Airport, as angry fans launch 14 days of protest outside Melbourne Park after the star was deported.

The Serbian player and his entourage were walking towards their gate to board a flight home to Belgrade when a passer-by called out to him.

‘How do you feel about the three-year ban?’ a woman called out to Djokovic, who just moments before had been happily snapping selfies with airline staff and fans.

The player stared resolutely at the ground and refused to answer as members of his team are heard protesting the touchy question. 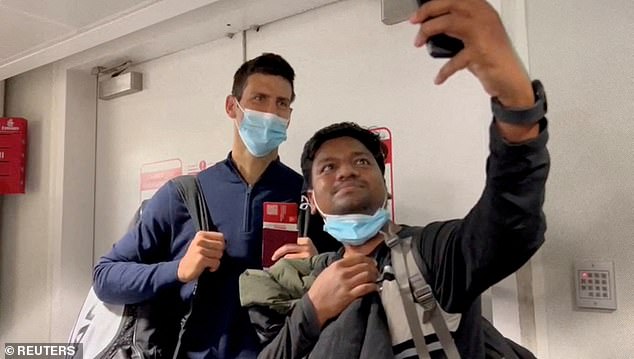 Confirmation of Djokovic’s three-year ban from Australia, issued by government officials on Monday, comes as hordes of angry tennis fans have pledged to hold a daily vigil outside Melbourne Park for the entire tournament.

The demonstration, dubbed ‘Occupy Australian Open’, will protest the vaccination mandate that saw their beloved tennis star booted from the country.

On Sunday, the federal court ordered Djokovic would be deported after his lawyers failed to convince three senior judges of his right to remain in Australia.

As he touched down in the United Arab Emirates en route to Europe, the Australian Open kicked off without him, with his name taped over on the official draw. 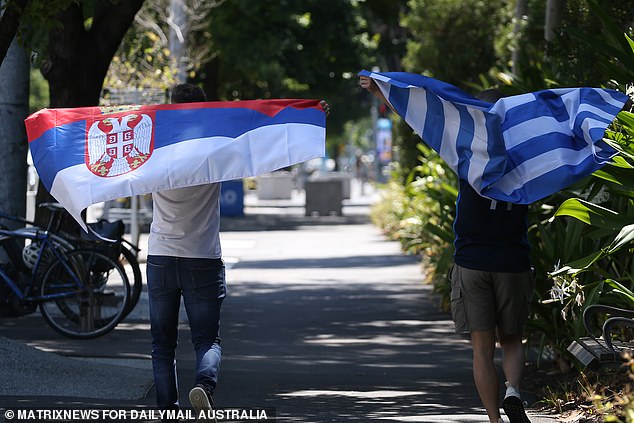 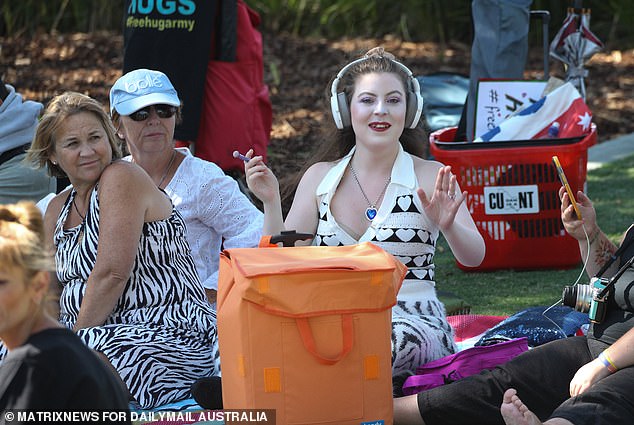 The demonstration, dubbed ‘Occupy Australian Open’, will protest the vaccination mandate that saw their beloved tennis star booted from the country (pictured, protesters in Monday) 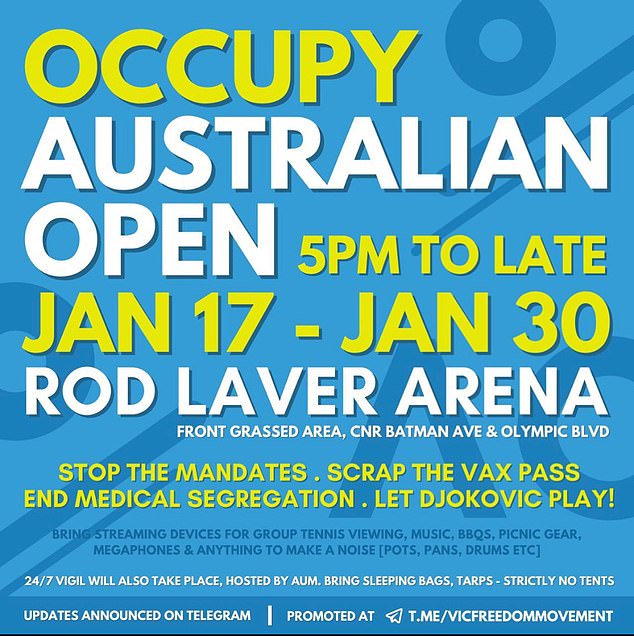 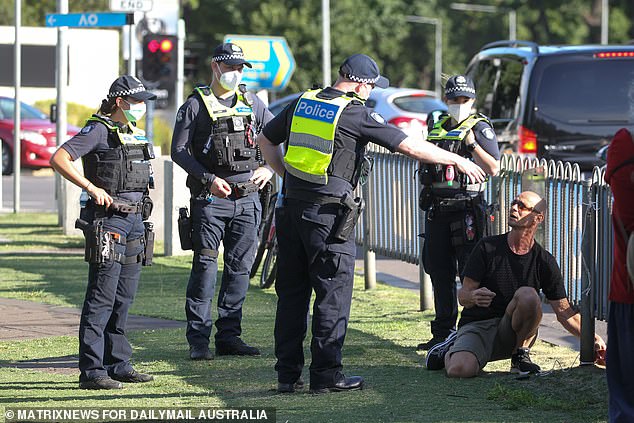 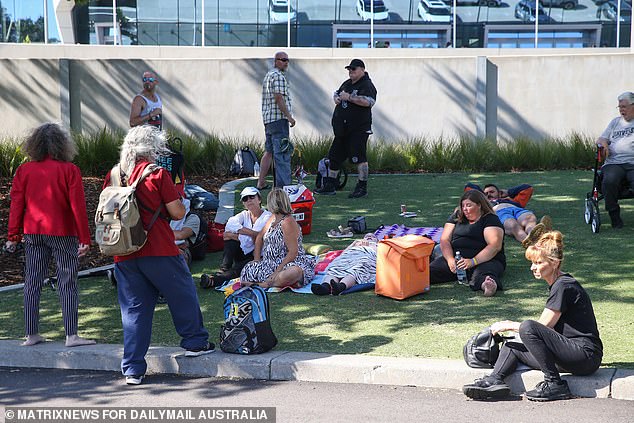 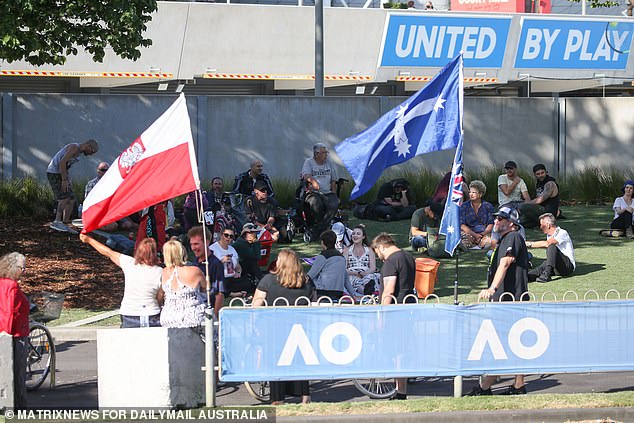 In an interview with the Today Show on Monday, Home Affairs Minister Karen Andrews confirmed the three year ban was the outcome of the court decision.

‘That cancellation was upheld by the Federal Court, so as a result of that, he will be banned from entry for three years into the country.’

Ms Andrews said should Djokovic return to Australia with compelling reasons in the future ‘that may be looked at but that’s all hypothetical at this point.’

Djokovic left Australia late on Sunday night after 11 days of remarkable legal wrangling saw the tennis champion finally exhaust his options, with the full bench of the Federal Court siding with Minister Hawke.

He was escorted to Melbourne Airport by police on Sunday evening and boarded an Emirates flight to Dubai about 10.30pm, and will transit on to Spain. 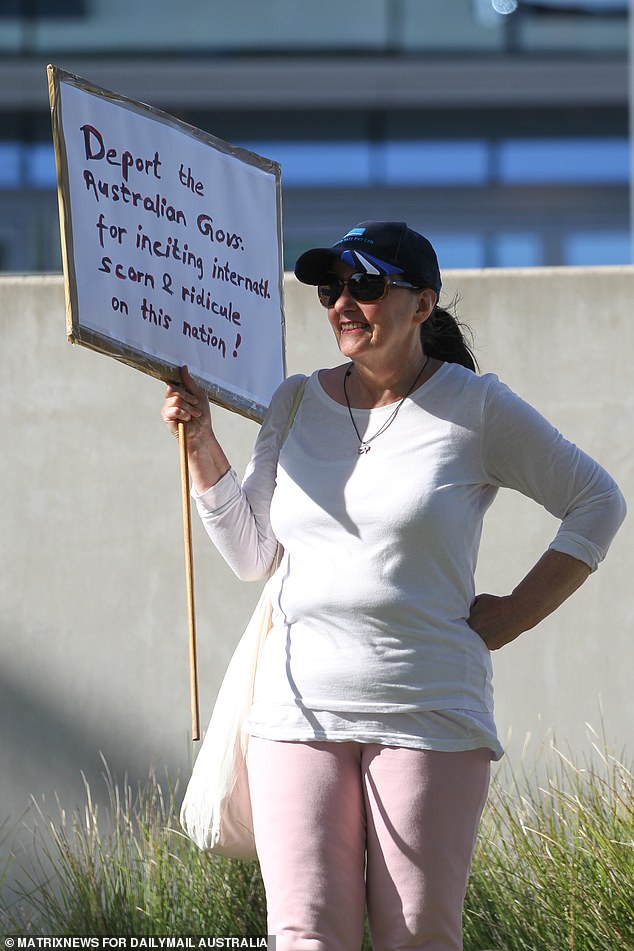 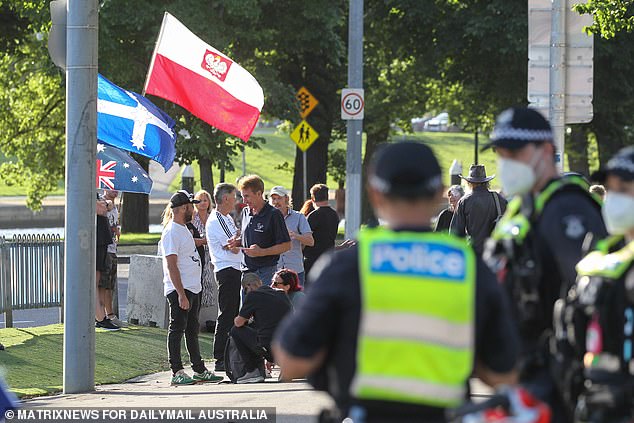 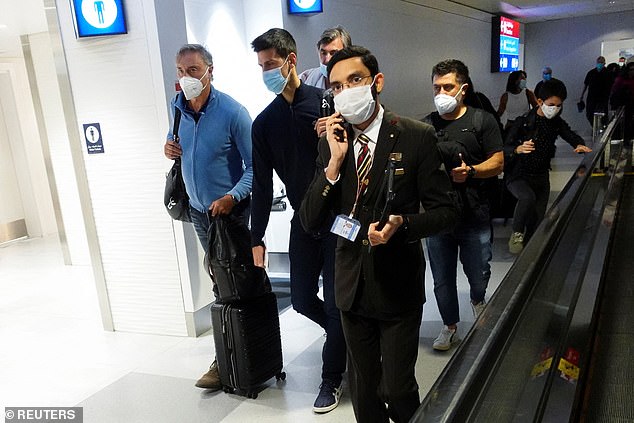 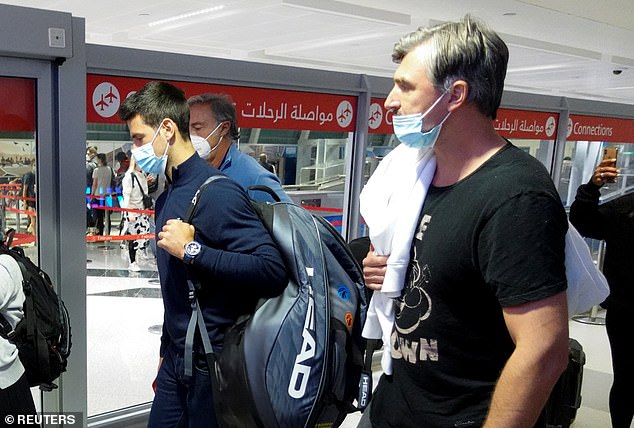 Djokovic was escorted to Melbourne Airport by police on Sunday evening and boarded an Emirates flight to Dubai about 10.30pm and will transit on to Belgrade

The controversial decision was met with shock by his fans, family and politicians back in Serbia, with Djokovic’s outraged father labelling it an ‘assassination attempt’ against his son and President Aleksandar Vucic accused Australian officials of ‘lying’.

But Scott Morrison, and millions of Australians, supported the move, with the prime minister saying he ‘welcomed the decision to keep our borders strong’.

The prime minister did add that despite the three-year ban there could be room for the tennis ace to travel back to Australia.

‘It does go over a three-year period but there is the opportunity for them to return in the right circumstances, and that will be considered at the time,’ he said.

The 34-year-old, who has been ordered to pay the federal government’s legal costs, said he was ‘extremely disappointed’ with the court’s decision to dismiss his application but that he respected its ruling.

His father, Srdjan Djokovic: ‘The assassination attempt on the best sportsman in the world is over, 50 bullets to Novak’s chest – after all, he gives support to a young 17-year-old player, so that’s Nole, a man, a brother, see you in Paris.’

Serbian President Aleksandar Vucic: ‘You saw in the pointless court proceeding how much the prosecution lied.

‘They are simply lying. They say there are fewer than 50 per cent vaccinated people in Serbia and officially the number is 58 per cent.

‘Don’t forget that’s higher than in many European Union countries. That was a pointless argument, but that’s possible in Orwellian performances.’

French tennis star Alize Cornet: ‘What I know is that Novak is always the first one to stand for the players. No none of us stood for him. Be strong.’

Nick Kyrgios: Posted a ‘facepalm’ emoji after the ruling, and has been vocal about how badly he thinks Djokovic has been treated 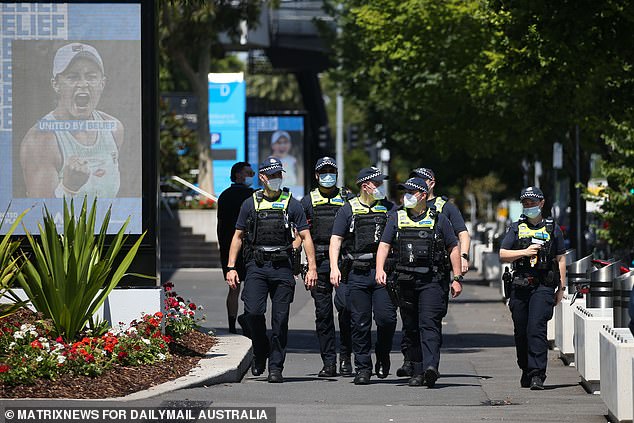 Home Affairs Minister Karen Andrews on Monday said it was a requirement to be vaccinated to cross the Australian border (pictured, police patrolling Melbourne Park on Monday)

Home Affairs Minister Andrews on Monday acknowledged there were some ‘issues’ around the interview process after the world No.1 was stopped at Melbourne Airport but Djokovic was not entitled to enter the country – despite being granted a visa before arriving.

‘Anyone coming into Australia it is their responsibility that they are meeting the entry requirements… just because you have a valid visa does not guarantee you will be able to enter Australia,’ she said.

‘What was given to Mr Djokovic on arrival in Australia – before he cleared our immigration processes – was the opportunity to be able to produce the documentation that was needed, which he could not.’

‘He wasn’t fully-vaccinated, which is a requirement. If you are not you have to be able to provide medical evidence to support there is a medical reason why you can’t be vaccinated – that was the issue at the border.’ 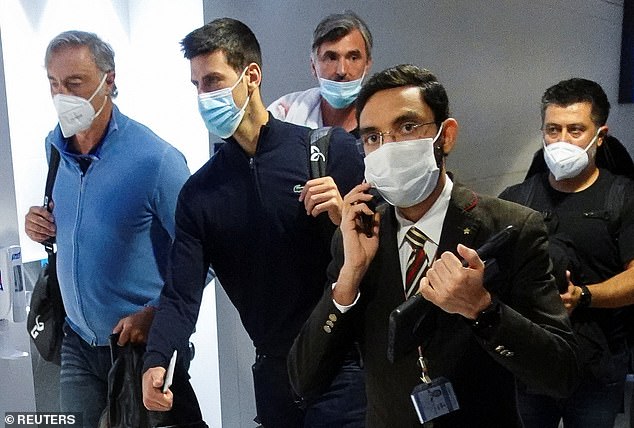 ‘How do you feel about the three-year ban?’ a woman called out to Djokovic, who just moments before had been snapping selfies with airline staff and fans

The world No.1 was required to prove to the court that Mr Hawke acted irrationally or legally unreasonably in choosing to use his discretionary powers under section 133C (3) of the Migration Act to revoke Djokovic’s visa.

Chief justice of the Federal Court of Australia, James Allsop pointed out it was ‘no part of the function of the court to decide upon the merits or wisdom’ of the immigration minister’s decision but had to view the case on a legal basis.

Mr Hawke said his decision on Friday was based on ‘health and good order grounds’, claiming the unvaccinated sporting celebrity’s presence in Australia could excite anti-vaccination sentiment.

Given the approval of Mr Hawke’s order, Djokovic will be barred from travelling Down Under until 2025 as those subjected to rulings under that part of the Migration Act are unable to be granted visas while offshore for a duration of three years.

The sanction can be waived in certain situations, including compassionate or compelling circumstances that affect the interests of Australia.