Laughter erupted from the Question Time audience on Thursday evening as Labour MP Anneliese Dodds said her party was ‘consistent’ on Brexit.

The former MEP insisted Jeremy Corbyn’s Labour is united and there is no Brexit divide.

The Parliamentary representative for Oxford East said ‘Labour has been consistent from the beginning.’

Audience members burst out laughing and the MP hit back.

She insisted ‘we have been’ and even challenged the audience to outline times they have not been.

The shadow treasury minister said: ‘From the very beginning we said we were going to judge whatever the government came up with and there were six tests and they were the same tests the government itself was using.’

Tory Remainer Anna Soubry: ‘You’re not daft you know that Labour is absolutely divided from top to bottom.’

One person wrote: ‘How Anneliese Dodds can say with a straight face that Labour has been consistent in its take on Brexit is a total Trump triumph. Lol.’ 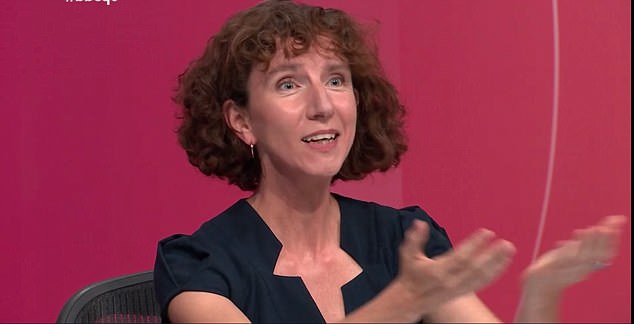 William Hanbury wrote: ‘Labour sat on the fence for 18 months and finally plumbed for the bleeding obvious solution that we have to stay in the customs union’

Breixt appears to have rocked the Labour party in recent months as Northern Ireland secretary Owen Jones was sacked by Jeremy Corbyn after he spoke out in favour of the Single Market, in March.

The official party policy is for the UK to be in a customs union with the UK rather than staying in the customs union and the single market.

However, MPs like Chuka Umunna want to stop Brexit altogether.