Jacob Rees-Mogg was met with applause on Question Time when he accused the BBC of bias in favour of the European Union.

His appearance on the show, filmed in Portsmouth last night, comes in the same week he called for the organisation to be renamed the ‘Brexit Bashing Corporation’.

Mr Rees-Mogg was cheered by audience members as he made is point which saw him challenged by the programme’s presenter David Dimbleby.

Jacob Rees-Mogg, pictured on Question Time last night, was met with applause when he accused the BBC of bias in favour of the European Union

The MP and ardent Brexiteer claimed that the BBC had been ‘shocked’ by the result of the June 2016 referendum and had been negative in its reporting of Brexit ever since.

He said: ‘Dear old auntie. How many times have we heard on the BBC “in spite of Brexit”?

Mr Dimbleby urged Mr Rees-Mogg to provide a ‘quotation’ to back up his claims. The politician replied: ‘Well you just have to listen to the news.

‘I think anyone who has listened to the news recently has heard the ‘in spite of Brexit’ terminology and I think the audience knows that.’

Several audience members then made noises of approval to Mr Rees-Mogg’s point as Mr Dimbleby asked him: ‘Are you sure?’ 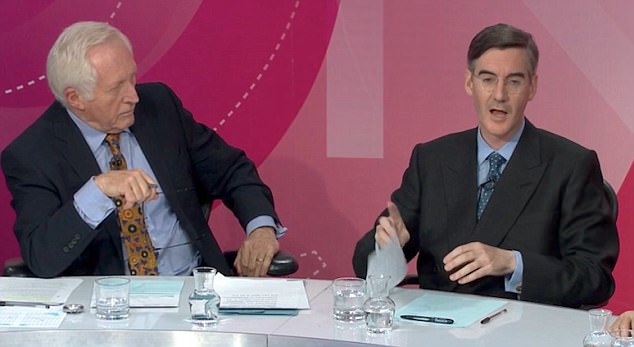 The politician then went on to quote a survey by a national newspaper on the political standpoints of viewers of The Andrew Marr Show.

He said: ‘The Andrew Marr show has had 84 per cent of its people on being anti-Brexit, 129 interviewees against 33 in favour. The balance of the BBC has been against.’

One young audience member agreed with Mr Rees-Mogg’s argument. Speaking on the show he said: ‘With respect, I think the BBC have been biased against Brexit.

‘I personally believe that was the case.’

As the crowd burst out laughing the audience member said: ‘Not you Jacob!’

Mr Rees-Mogg took aim at the BBC earlier this week as he also labelled the Governor the Bank of England as an ‘enemy of Brexit’. 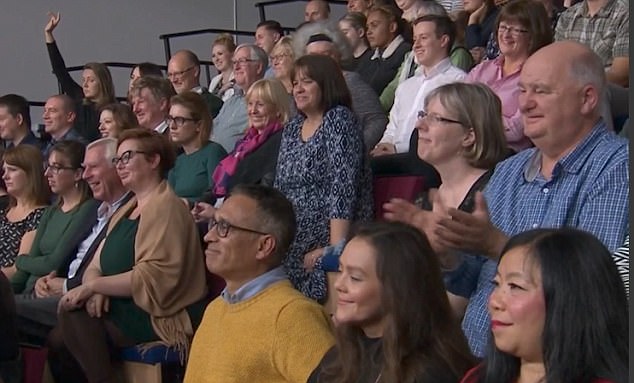 He told BBC Radio 5 Live that Mark Carney had ‘consistently complained’ about the Brexit vote and the result.

Mr Rees-Mogg added: ‘He said before the Brexit vote there would be a sharp downturn in the economy because of Brexit, he had a panic interest rate cut that was completely unnecessary and helped push the pound down further than it would otherwise have gone.

‘Mark Carney has opposed Brexit the whole way through, and is an enemy of Brexit. There is no doubt about that. He’s shamed his role because he’s become a partisan.

‘He quite disgracefully intervened in the referendum campaign, by giving forecasts one way or another.’