She is dressed in the casual, ‘urban cool’ uniform of the London 20-something: skinny jeans, unzipped hoodie, Nike baseball cap, trendy shades.

Her hair dyed and straightened in the style of her generation. She really could be any young woman about town.

But this is not any young woman. This is Shamima Begum, the teenager who fled Britain in 2015 to marry an Isis fighter.

The now 21-year-old who described with chilling nonchalance how she ‘wasn’t fazed’ by the sight of a severed head.

Who declared how she had a ‘good time’ with Isis, and who justified the bombing of Manchester Arena.

When pictures emerged of her this week at the Syrian internment camp, they were bound to cause consternation.

Many, including her own family, would struggle to immediately recognise her. Gone is the black, full-length chador (long, flowing gown) and black hijab which used to frame her face that now bears the suggestion of a smile.

And now the Mail can reveal the truth about Ms Begum’s new life at the al-Roj detention centre in north-east Syria, where she has been living for the past two years. 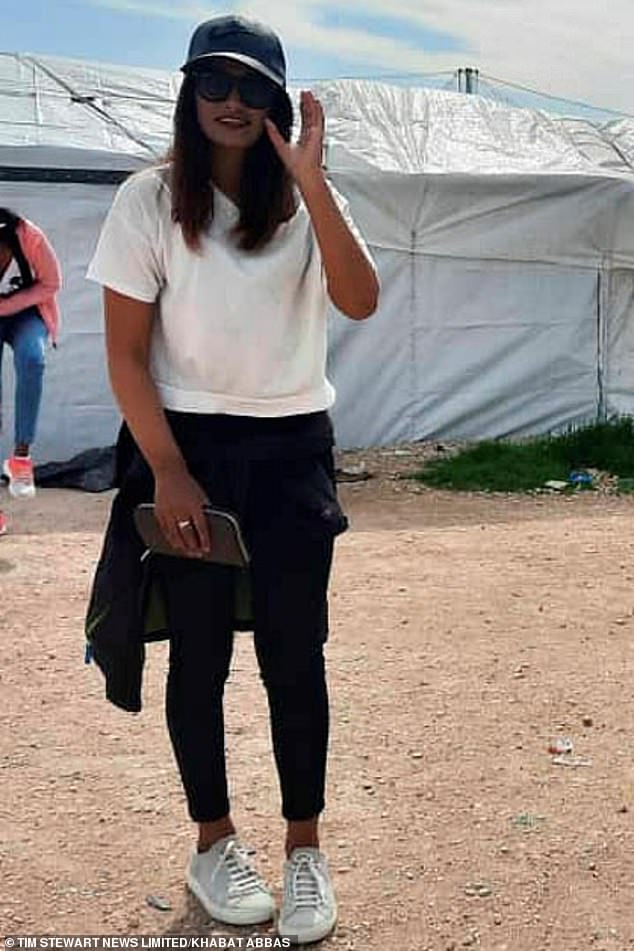 Her rejection of Islamic clothing is evidence, for some, at least, that she has renounced her past. Others believe her transformation is part of a ploy to win sympathy while her lawyers challenge the decision to strip her of her British citizenship

Speaking to her closest associates, we have learned how she spends her days watching Good Morning Britain on ITV in her tent, playing charades or dancing to the music of Shakira downloaded from the internet with her fellow Western campmates.

She is also fond of Zumba classes and watching films: the Spider-Man and Men In Black franchises are particular favourites.

Ms Begum insists she has changed.

She isn’t ‘that’ person any more: ‘I would say to people in the UK, give me a second chance because I was still young when I left,’ she pleaded this week in an emotive interview for a new documentary.

Her rejection of Islamic clothing is evidence, for some, at least, that she has renounced her past.

Others believe her transformation is part of a ploy to win sympathy while her lawyers challenge the decision to strip her of her British citizenship. 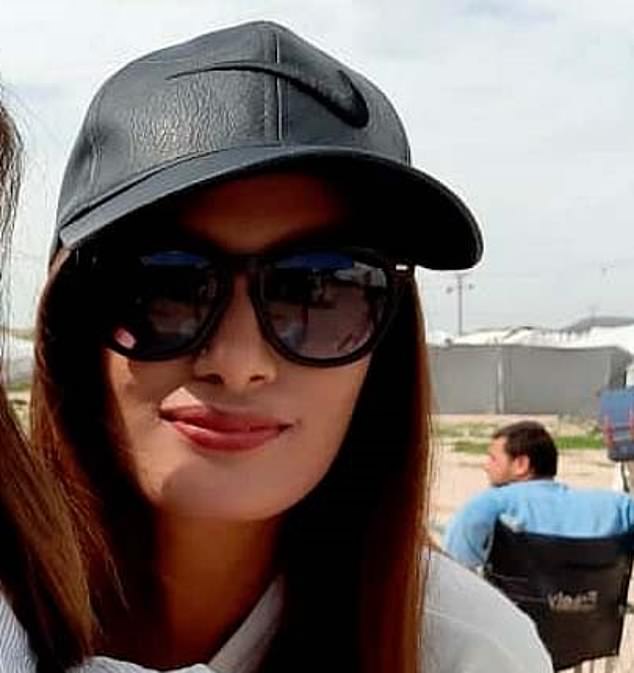 A number of woman, like Ms Begum, have voluntarily given up Islamic dress entirely. And they appear to be enjoying the Western lifestyle wherever possible. Ms Begum mixes with a small circle of European and American friends. 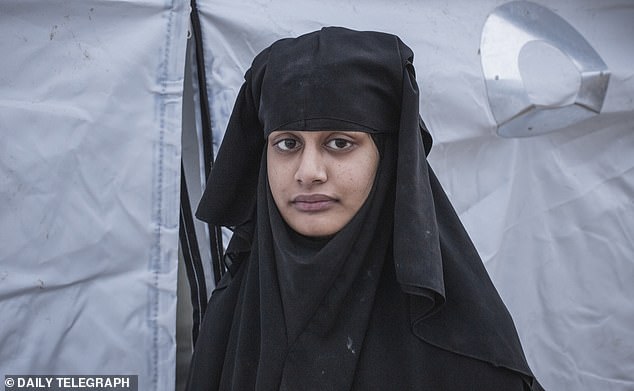 Last month, the UK’s Supreme Court ruled on national security grounds that she cannot return to Britain to pursue an appeal against the decision.

Either way, her striking new image has turned the global spotlight on to Shamima Begum and her life at al-Roj.

She is among a 50-strong British contingent of women and children at the encampment, which houses around 800 families in total.

Modern luxuries aside, few of us would wish to spend any time in this sprawling, tented shanty town.

Yet to those who were captured following the collapse of the murderous caliphate, it is the nearest thing they have had to a home for some considerable time and infinitely preferable to the previous camp where most of them, including Ms Begum, were transferred from, and where there have been 40 murders so far this year.

The authorities at al-Roj — the Kurdish-led and Western-backed Syrian Democratic Forces (SDF) — have banned black clothing, the colour of Isis, and black face veils.

A number of woman, like Ms Begum, have voluntarily given up Islamic dress entirely.

And, we can reveal, they appear to be enjoying the Western lifestyle wherever possible. Ms Begum mixes with a small circle of European and American friends. 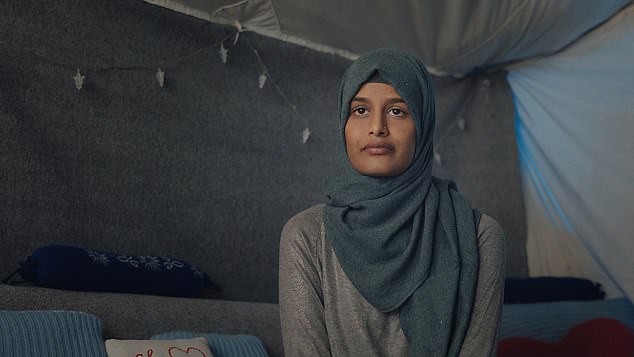 In the documentary, The Return: Life After Isis, which has followed her and the other women over the past two years, Ms Begum is filmed in her tent; in the background is a couch with cushions, one of which has ‘love’ stitched into it and another is in the shape of a heart

U.S.-born Hoda Muthana, 26, once a high-profile Isis agitator, is a member of her close-knit social group, so too is Canadian Kimberly Polman, a mother of three adult children in her late 40s; all three were Isis brides.

Miss Begum was married off to a Dutch jihadi with whom she had three children in quick succession, all of whom died of disease or malnutrition before she arrived at al-Roj.

Her husband is thought to be held in a Kurdish-run prison in Syria, and the pair haven’t been in contact since 2019.

Someone who has got to know Ms Begum well is Syrian journalist Khabat Abbas, whom I spoke to this week. She describes a woman who, on the surface at least, seems quite normal.

The two posed for a selfie together in the camp only a few days ago when Ms Begun was sporting a blue Nike baseball cap with trademark ‘swoosh’ logo; she could hardly have looked more unlike the young woman she used to be just a matter of months ago.

Khabat, who has visited Ms Begum many times, and has been inside her tent, which has a satellite TV and basic cooking facilities, says: ‘She is very happy here.’

She adds that Ms Begum seems undimmed by the latest setback in her case that has left her stranded, for the foreseeable future, at any rate, in legal limbo.

In the documentary, The Return: Life After Isis, which has followed her and the other women over the past two years, Ms Begum is filmed in her tent; in the background is a couch with cushions, one of which has ‘love’ stitched into it and another is in the shape of a heart.

The women often hold parties in their living quarters.

Music was haram — prohibited under the strict interpretation of the Koran.

‘They are always socialising together,’ Khabat says. ‘They have even invited me to spend the night with them.’

One typical party is featured in the documentary, which shows a tent lit up with fairy lights and the women eating pastries.

In another scene, they engage in a ‘group hug’ and a voice can be heard saying: ‘I don’t know what I’d do without you guys.’

How else do they pass the time? They attend group meditation sessions, according to Khabat, and there is even a playground with swings and slides for the children.

The camp has numerous shops — run by ordinary refugees who are allowed to enter and leave at will — selling second-hand European clothes, make-up and jewellery, as well as vegetables, groceries, chocolate, crisps and other basic provisions.

The documentary makers show Ms Begum’s group queuing up at a money exchange ‘hole in the wall’ window for hawala — an ancient system based on trust between brokers that leaves no paper trail.

This is a method often used by those in such camps to receive funds from family based in other countries. 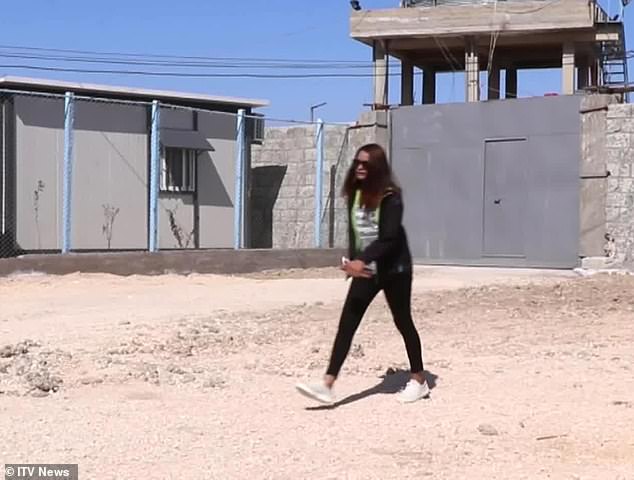 Shamima is among a 50-strong British contingent of women and children at the al-Roj detention centre in north-east Syria, which houses around 800 families in total

Families can be prosecuted for sending money to relatives under anti-terror legislation.

Khabat accompanied the woman to the ‘hole in the wall’ herself this week.

When she asked Ms Begum if her family had sent her money, she quickly walked away without answering the question.

Like everyone at the camp, Ms Begum has taken part in an anti-radicalisation programme.

In The Return: Life After Isis, she is seen writing to her younger self and then reading the letter out aloud.

‘I know you think this is the only option you have to hold on to your religion and escape the problems in your life, but you have your entire life ahead of you to complete your religion and mend broken relationships between everyone in the family,’ she says, addressing the camera.

‘Think about Mum and how much it would hurt her to know that her little baby left her and didn’t give her a hug and a kiss, knowing that she’ll probably never see her again. 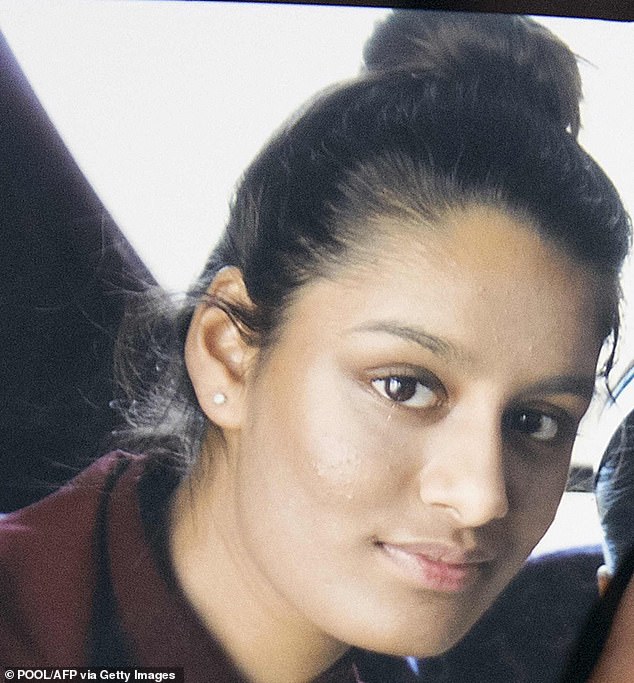 ‘Think about the education you’re about to throw away. You worked so hard to get where you are now. Don’t just walk away from it all for something I know you’re not even certain about.’

Sky will be screening the 90-minute film on Sky Documentaries and Now TV in the summer.

Shamima is heard speaking for the first time about what drove her to desert her country, her home, and her family, and join Isis with two school friends from East London, Amira Abase and Kadiza Sultana, both now presumed dead.

‘I felt like I was an outsider in my community,’ she says.

‘So I just wanted to be part of something. My friend started practising [Islam] and they helped me come into the religion as well… and it then turned into wanting to come to Syria, wanting to help the Syrians.’

She was subsequently groomed by online radicals.

Two months later — just two months is all it took — she and her friends were on a plane from Gatwick bound for the Middle East.

In interviews after she was discovered in 2019 at al-Hol — the camp where she was based previously, also in north-east Syria — she continued to espouse the barbaric ideology of Isis.

A clip of one of those inflammatory interviews, where she failed to condemn the Manchester Arena atrocity after being asked about the child victims by a Manchester journalist, is played to Ms Begum during the documentary.

It is a chilling reminder of why she remains such a divisive and controversial figure.

Ms Begum responds to being shown the footage by saying she ‘had no choice but to say certain things’ to reporters because ‘she lived in fear’ that women at al-Hol would kill her if she didn’t. 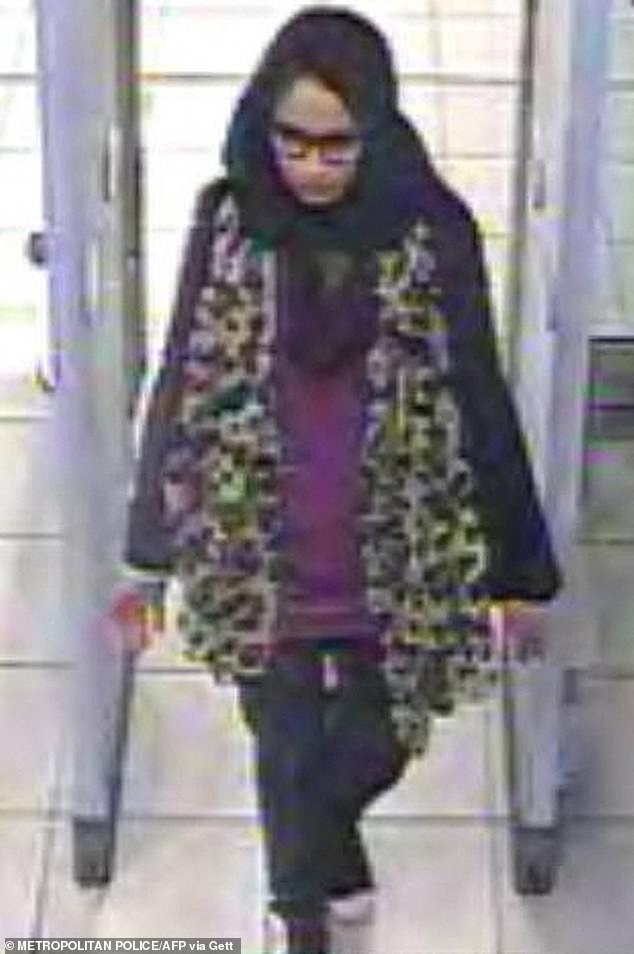 Two months after online radicals started grooming a then-15-year-old Shamima, — she and her friends were on a plane from Gatwick bound for the Middle East

The section comes after we are told that hardline Isis supporters in the (al-Hol) camp sewed up a family’s tent and burned a mother and her three children to death.

Ms Begum’s mother, Asma, and sister, Renu, have pleaded with the Home Office to reconsider its decision to revoke her British citizenship, ‘calling for an act of mercy’.

Her father, Ahmed Ali, who lives in Bangladesh with his second wife, has apologised for his daughter joining Isis but also urged the Government to ‘take her back and punish her’ if necessary.

But the Supreme Court was presented with excerpts of MI5 assessments which said that there was an increased risk that those exposed to ‘desensitising acts of brutality’ under Isis would ‘inspire and encourage’ others to carry out attacks in the UK.

Others also remain sceptical that Ms Begum has been deradicalised. ‘I would say her change of clothes are a soft tactic advised by her legal team to try to win back the hearts and minds of the British public,’ said Eilish O’Gara, a counter-terrorism analyst with the Henry Jackson Society foreign policy think tank.

Ms Begum’s lawyer, Daniel Furner, of Birnberg Peirce, one of the country’s leading human rights law firms, denied advising her to change her appearance, saying it was ‘categorically untrue’.

The Kurdish authorities holding Ms Begum and other Isis members certainly want them repatriated back to the UK.

Around half of the estimated 900 or so people who travelled to Syria and Iraq from Britain to join ISIS have now returned — but only about half of those have been successfully prosecuted.

In a rare moment of levity during the documentary, Ms Begum is asked by one of the Western brides what she would do first if she got home.

Laughing, she replies: ‘Eat a nice big Subway… just leave me with it.’

That is unlikely to happen any time soon.