This is the heart-stopping moment a quick-thinking stranger saved the life of an unconscious jetskier who almost drowned after crashing into the waves.

While riding off Port Tampa Bay in Florida, a man spotted a fellow jetskier lying lifeless in the surf.

The stranger, who happened to be filming the scene, immediately rode over to the man who was lying face down and unconscious in the water.

Thinking quickly, he instantly jumped into the water and flipped the man over, keeping his head held up so he could breathe.

He repeatedly says, ‘I’ve got you, I’ve got you’, to the unconscious man as he drags him over to his abandoned jetski.

As the man is flipped over, a heavily-bleeding deep cut is revealed on his chin and blood seems to be coming out from his ears.

While riding off Port Tampa Bay in Florida, a man spotted a fellow jetskier lying lifeless in the surf. He instantly sped over to him 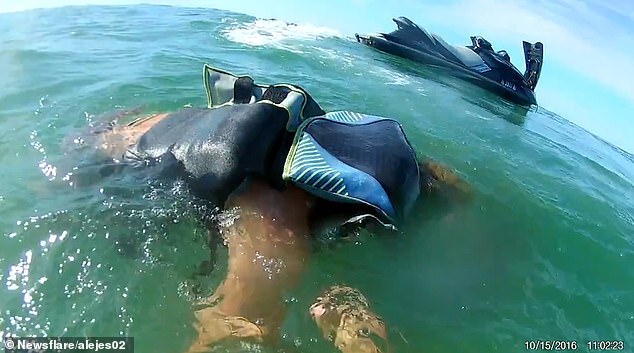 After a couple of minutes the man regains consciousness but seems confused and appears concussed.

Another man then rides over and the filmer can be heard saying: ‘Dad hold him up or call 911’.

His father then promptly gets on the phone.

As the injured man is coming to the filmer tells him: ‘You’ve got a bad head injury, keep your head up okay?’.

The concussed man tries to clamber back on to his jetski but the filmer says: ‘You ain’t going nowhere.’ 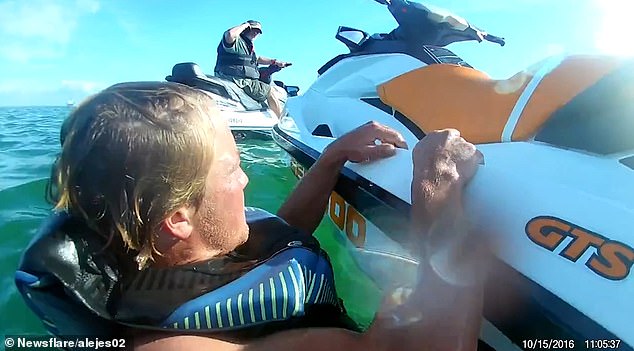 He regains consciousness but seems confused and appears concussed. The man who rescued him can be heard saying: ‘You ain’t going nowhere. Just relax, I’ve got you’

Eventually another man comes over to the scene who seems to know the injured jetskiier and helps to haul him up on to his vehicle.

The filmer can be heard telling the man’s friend: ‘He needs to get checked out by a paramedic.

‘He could have drowned it’s lucky I was there.’

The man then climbs back on to his jetski and removes his helmet, which appears to have had the camera attached, and stops the recording.