R Kelly has been charged with ten counts of aggravated criminal sexual abuse by the Cook County State’s Attorney Office.

Records obtained by DailyMail.com reveal that most of the counts he was charged with on Friday involved girls who were between the ages of 13 and 16 at the time.

The fourth, who claims that she was assaulted by Kelly in 2003, was over the age of 18 at the time of the alleged offense.

Kelly, 52, will appear in bond court on Saturday and then be formally charged on court on March 8, according to court records.

And on Friday afternoon, Chicago police were handed a no bail arrest warrant to bring in Kelly after a judge signed off on the order.

Kelly has previously denied all allegations of assault and abuse through his lawyer, who was unaware of the charges against his client when contacted on Friday afternoon.

Back to court: R Kelly (above at his 2008 trial) has been charged with 10 counts of aggravated criminal sexual abuse by the Cook County State’s Attorney’s office 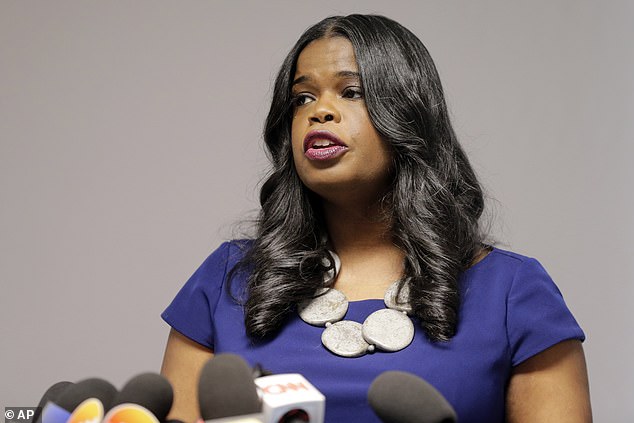 Got him: The incidents allegedly took place between 1998 and 2010, and is unclear if the grand jury is done hearing testimony and evidence in the case (Cook County State’s Attorney Kim Foxx at a press conference on Friday)

The fourth count stems from the claim that ‘Robert Kelly touched his mouth to H.W’s breast.’

In that case there was ‘contact between Robert Kelly’s penis and J.P’s sex organ,’ ‘moth’ and ‘the transmission of semen by Robert Kelly.’

This comes just one day after the Cook County State’s Attorney’s Office announced that Jussie Smollett had been indicted by a grand jury on a single charge of disorderly conduct for falsifying a police report.

The rape tape was submitted to the State’s Attorney’s Office last week by Michael Avenatti.

At the time, Avenatti said that he believed it showed Kelly and an underage minor whose age he guessed to be 14.

CNN then watched the tape as well, despite the fact that it is a federal crime to watch child pornography.

When asked if either party might be investigated for these actions, an FBI spokesperson declined to comment.

Kelly had yet to be hit with any criminal charges  in the wake of the docuseries until Friday.

His manager however found himself in trouble with the law days after the series premired.

A police report filed in Georgia reveals that Don Russell texted and called Timothy Savage, the father of one of the alleged victims, to say it ‘would be best for him and his family if the documentary does not air.’

The report states that Savage called police shortly after 5am on the day of the incident.

The responding officer then arrived at the house before 5:45am, which is when Russell called Savage on the phone.

It’s not clear exactly when Jocelyn went to live with Kelly but her family say they have not seen her since December 2017. ‘It was as if she was brainwashed. [She] looked like a prisoner — it was horrible,’ her mother said.

The family contacted police after their daughter fled to live with the singer and told officers how he was running a ‘cult’.