R Kelly confirms he married Aaliyah when she was just 15, says late singer lied about her age

R Kelly has finally confirmed that he was briefly married to Aaliyah – through his lawyer.

Steve Greenberg appeared on Good Morning America to address the recent allegations of rape, abuse and sexual misconduct made about his client on the Lifetime docuseries Surviving R Kelly on Friday morning, when he was asked if the singer had ever been in a relationship with a woman who was below the age of consent.

Greenberg quickly replied that Kelly ‘absolutely’ denied being with any underage girls, a response that was quickly called into question.

‘Was he married to Aaliyah when she was 15?’ asked reported Linsey Davis.

That was a reference to the union of Elvis Presley and wife Priscilla, who was almost 17 when she married the rock star and did so with her parents’ blessing.

Predatory: R Kelly did marry Aaliyah in 1994 when she was only 15 and he was 27 according to the singer’s lawyer Steve Greenberg, who appeared on GMA (Kelly and Aaliyah above in 2014) 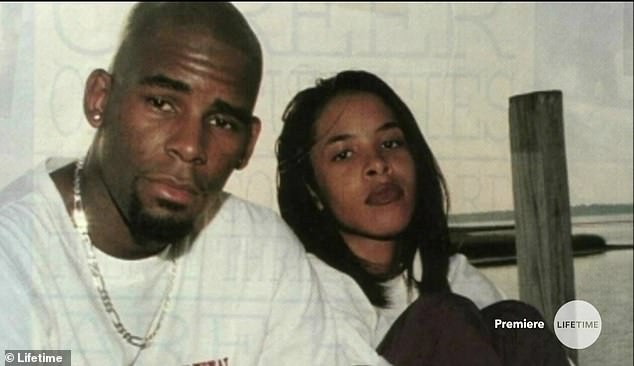 Age ain’t nothin: Just before admitting to that, Greenberg had declared that Kelly never had a relationship with any underage girl despite multiple allegations (Kelly and Aaliyah above in 1993) 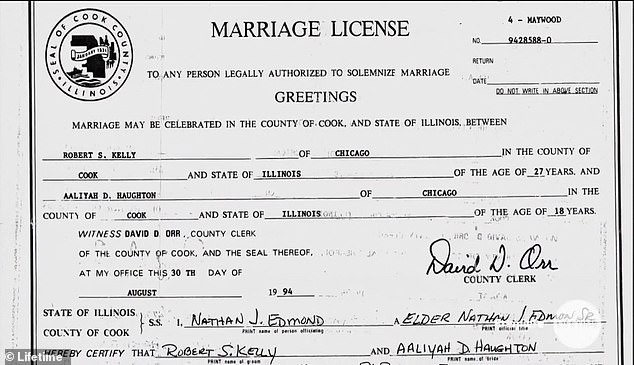 Official: [M]y understanding is that she did not claim to be 15. And in order to get married she had to lie about her age,’ claimed Greenberg of Aaliyah (the certificate, which declares Aaliyah is 18)

Davis then continued to back Greenberg into a corner, stating: ‘So then, 15 is not of the age of legal consent, right?’

Greenberg had an excsude for his client however, saying it was Aaliyah who lied and was dishonest.

‘Right except my understanding is that she did not claim to be 15. And in order to get married she had to lie about her age,’ claimed Greenberg.

‘And he is saying he had no idea,’ replied Davis.

It is unclear how Kelly was unaware, especially since he was present alongside Aaliyah during a 1994 interview on BET that made mention of her age, 14, and the fact that she was in high school, multiple times.

Earlier in the program, Davis asked Greenberg if Kelly planned to take legal action against Lifetime following the release of the series.

When asked on what grounds he might file a lawsuit, Greenberg said: ‘For defamation, because people should not be able to do this to someone.’ 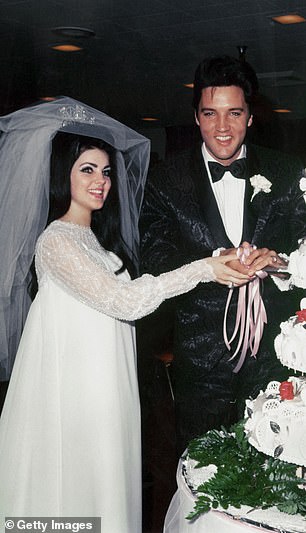 Greenberg tired to compare the union to Elvis and Priscilla Presley, who was two weeks shy of turning 17 and married with her parents’ blessing

Kelly was last asked about Aaliyah in 2016 during an ninterview with GQ, in which he said: ‘Well, because of Aaliyah’s passing, as I’ve always said, out of respect for her mother who’s sick and her father who’s passed, I will never have that conversation with anyone.

It was Vibe that first broke the story of Aaliyah and R Kelly’s marriage in 1995, with some claiming the singer had been pregnant at the time of the wedding.

Kelly’s former dancer Jovante Cunningham revealed that she saw Kelly having sex with Aaliyah when she was just 15.

‘[I saw] things that an adult should not be doing with a child. He was having sex with Aaliyah,’. said Cunningham.

‘[You] get on the bus there are bunks and these bunks have little curtains you can pull at night if you don’t want anyone to see you sleeping.

‘It just so happened we were all laying in our bunks and the curtains are open, everybody’s communicating, laughing. It was prank time when the door flew open on the bus. Robert was having sex with Aaliyah.’

Aaliyah’s mother later denied this and the claim that her daughter married Kelly, despite a marriage certificate that seems to suggest otherwise, on which it gives Aaliyah’s age as 18 rather than 15 to make the union legal. 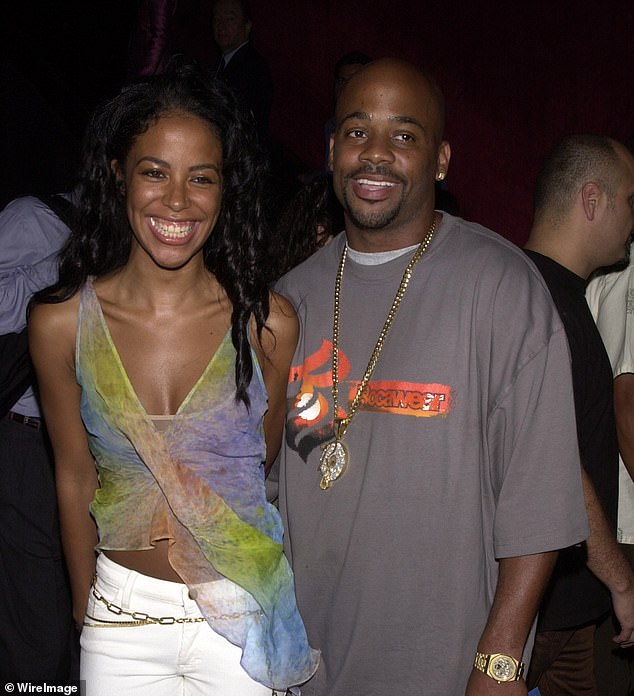 Difficult memories: ‘It was so much hurt for her to revisit it. I wouldn’t want to revisit it without a professional. Whatever got done was terrible,’ said Dash (above with Aaliyah less than two months before her death) 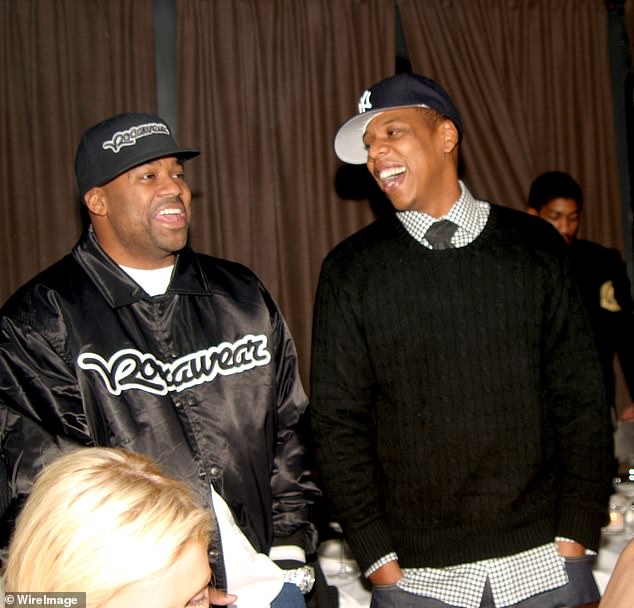 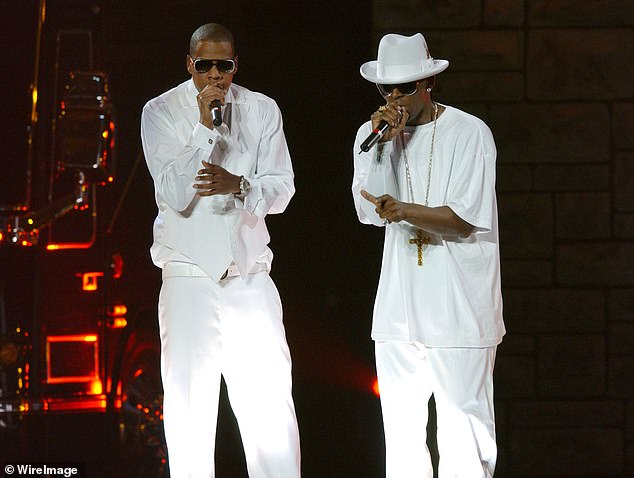 Last week, producer Damon ‘Dame’ Dash sat down for a candid and frank interview about the Lifetime series, and for the first time shared how Aaliyah felt about Kelly.

‘I watched some of it yesterday, as much as I could tolerate,’ said Dash while appearing on Hip Hop Motivation.

Dash, who was dating Aaliyah when she was tragically killed in 2001 plane crash, then added: ‘I’ve been tight about this sh*t for years.’

He later explained to host Kenyatta Griggs that Kelly played a big part in the demise of his partnership with Jay Z, who in 2002 agreed to work with the singer despite knowing what he had done to Aaliyah.

Dash admitted that he never really learned the full story regarding what transpired between Aaliyah and Kelly, who was 27 when he wed his then-15-year-old protégée.

‘I didn’t really want to know what he did, to the extent that I would, you know, deal with it because that’s what a man does,’ explained Dash.

‘But it was so much hurt for her to revisit it. I wouldn’t want to revisit it without a professional. Whatever got done was terrible.’

That is why his partner’s decision to collaborate with Kelly was too much for him to handle, with Dash claiming he donated all profits he made from Best of Both Worlds to a breast cancer charity in memory of Aaliyah.

‘So what you think I felt. I’m human bro. I had to look the other way, all these years,’ said Dame in another interview, this time with Nick Cannon.

He had started the same sentiments about that collaboration just a few days prior with Griggs.

‘I knew, morally, we weren’t the same. So, to me, Roc-a-Fella was defunct. It was over. I couldn’t f*** with it. It was something that, to me—I don’t wanna say ‘unforgivable,’ but I couldn’t understand it.’

Jay Z meanwhile is one of the many stars who has refused to speak out in the wake of the series, which he decided to participate in despite being contacted by producer dream hampton.