Race to the wire in PA: Trump embarrassment or close call?

MT. LEBANON, Pa. (AP) – Democrat Conor Lamb and Republican Rick Saccone were locked in a surprisingly tight congressional election Tuesday night that pitted the strength of President Donald Trump’s grasp on blue-collar America against the energy and anger of the political left.

The contest has drawn national attention as a bellwether for the midterm elections in November.

In a region Trump carried by 20 points, the White House has scrambled to rally voters behind Saccone, who cast himself as the president’s “wingman,” but has struggled at times to connect with the blue-collar coalition that fueled Trump’s victory little more than a year ago.

Democrat Conor Lamb, a 33-year old Marine veteran and former federal prosecutor, downplayed his opposition to the Republican president on Tuesday and insisted instead that the race hinged on local issues.

“This didn’t have much to do with President Trump,” Lamb said after casting his vote in suburban Pittsburgh.

Because of a state court decision redrawing Pennsylvania’s congressional boundaries, the winner will have to start campaigning for re-election almost immediately in a different district. Still, the election has far greater political consequences as each party prepares for the November midterm elections.

For the White House and its Republican allies, a Tuesday loss would represent both a profound embarrassment and major cause for concern in the broader push to defend majorities in the U.S. House and Senate.

The president has campaigned in the district twice and sent several tweets on Saccone’s behalf. Other recent visitors include the vice president, the president’s eldest son, the president’s daughter and the president’s chief counselor. Outside groups aligned with Republicans have also poured millions of dollars into the contest.

For Democrats, a win would reverberate nationwide, while even a narrow loss would be viewed as a sign of increased Democratic enthusiasm just as the midterm season begins.

Lamb was watching election returns privately, but hundreds of his family, friends and supporters were enjoying a buffet and drinks at a Canonsburg, Pennsylvania, hotel.

The excited supporters included Lamb’s middle school football and basketball coach, Joe DelSardo, who recalled Lamb as “a leader from the beginning.”

The former coach described the district as having “a lot of suit-and-tie people and people who dig in the dirt.” Lamb, he said, “can talk to all of them, and that’s why he can win.”

Registered Republican Brett Gelb said he voted for Saccone, largely because the Republican candidate promised to support the president.

“Saccone backs a lot of President Trump’s plans for the country,” said Gelb, a 48-year-old fire technician who lives in Mt. Lebanon. He added, “I do think Trump is doing a good job. I think he needs backup.”

Democrats must flip 24 GOP-held seats this fall to seize control of the House, and months ago few had counted on this Pittsburgh-area district to be in play. The seat has been in Republican hands for the past 15 years.

It was open now only because longtime Republican congressman Tim Murphy, who espoused strong anti-abortion views, resigned last fall amid revelations of an extramarital affair in which he urged his mistress to get an abortion.

After voting Tuesday in Allegheny County, Republican Saccone downplayed the significance of the unusually close race.

“The Democrats … they’re throwing everything they can at this race,” he said. “There hasn’t been an open seat for a long time.”

Besides bruising the president, a Lamb defeat also could shake Republican self-assurance that their new tax law can shield them from other political woes.

With polls showing a tight race for months, Saccone tried to persuade the GOP-leaning electorate that their choice was about “making America great again,” as the president repeatedly says.

Saccone, a 60-year-old Air Force veteran turned state lawmaker and college instructor, enjoyed enthusiastic backing from the social conservatives who’ve anchored his state career. He’s been perhaps at his most animated when emphasizing his opposition to abortion rights.

Yet Saccone struggled to raise money and stir the same passions that helped Trump on his way to the White House. The consistent fundraising deficit left him with limited resources to air the message he delivered one-on-one: His four decades of experience in the private sector, international business and now the Legislature should make voters’ choice a no-brainer.

“We worked really hard for it,” Lamb said after voting.

He did it though national Republican groups filled airwaves and social media with depictions of the first-time candidate as little more than a lemming for Nancy Pelosi – the California Democrat, House minority leader.

Lamb answered the criticism by saying he wouldn’t support Pelosi as floor leader, much less as speaker if the Democrats should retake control of the House. He also said he opposes major new gun restrictions – though he backs expanded background checks – and declared himself personally opposed to abortion, despite his support for its legality.

Lamb largely avoided mentioning Trump, who remains generally popular in the district even if slightly diminished from his 2016 dominance.

Lamb embraced Democratic orthodoxy on the new GOP tax law, hammering it as a giveaway to corporations at the future expense of Social Security, Medicare and the nation’s fiscal security. And he embraces unions, highlighting Saccone’s anti-labor record at the statehouse, which was a notable deviation from the retiring Murphy’s status as a union-friendly Republican.

The AFL-CIO counts 87,000 voters from union households – around a fifth of the electorate.

In a final-hours message on Fox Business Network, Saccone said that he was ready and willing to help Trump.

“He’s getting beat up in Washington as you see, from the media, from the bureaucracy and from Hollywood,” Saccone said. “He needs a good wingman.” 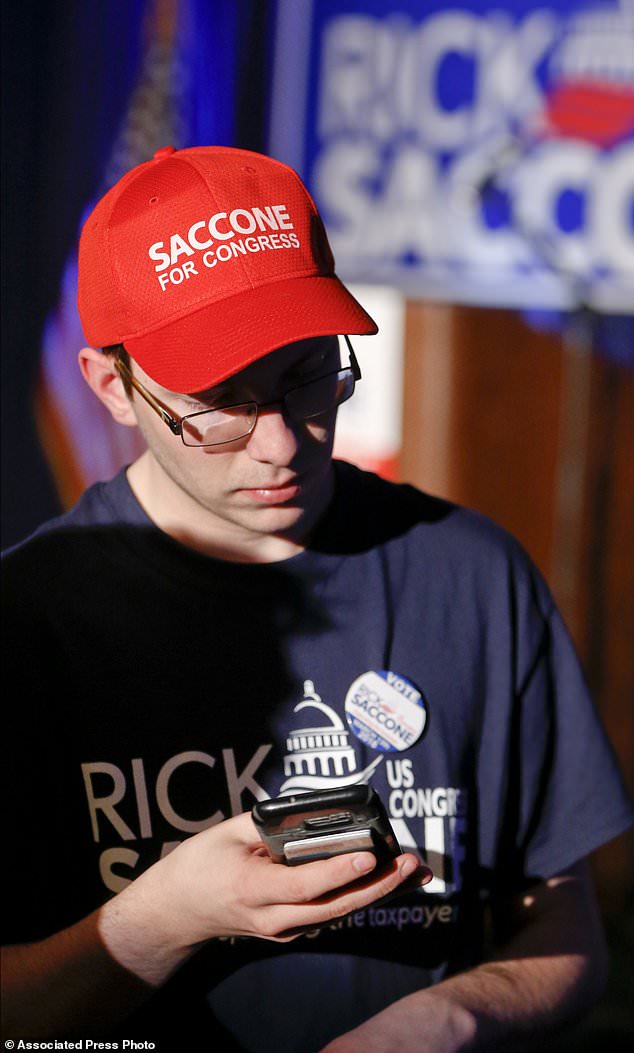 A supporter for Republican Rick Saccone checks his phone at the candidate’s returns party just after the polls closed in a special election being held for the PA 18th Congressional District vacated by Republican Tim Murphy, Tuesday, March 13, 2018 in McKeesport, Pa. Saccone is running against Democrat Conor Lamb. (AP Photo/Keith Srakocic) 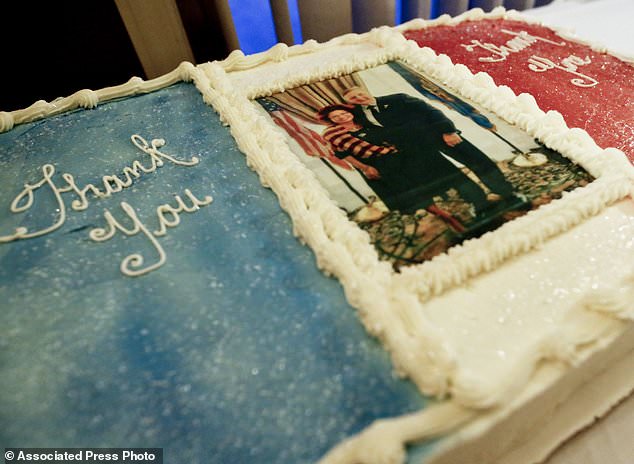 The icing of a cake at the election returns party has an image of Republican Rick Saccone, right, and his wife Yong Saccone in the center at the ballroom of the Youghiogheny Country Club as a crowd awaits returns in the special election for the Pennsylvania 18th Congressional District seat vacated by Republican Tim Murphy, Tuesday, March 13, 2018, in McKeesport, Pa. Saccone is running against Democrat Conor Lamb. (AP Photo/Keith Srakocic) 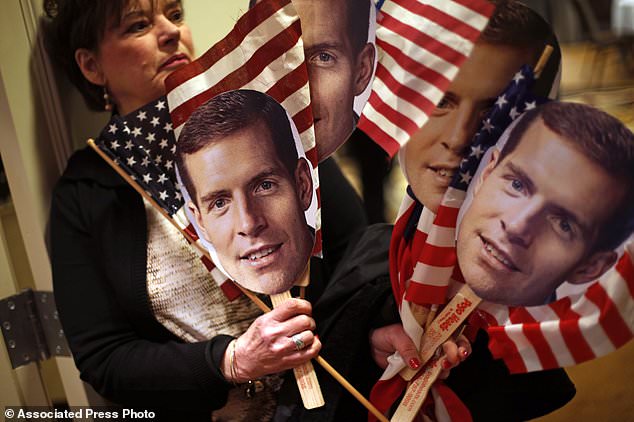