A racegoer has lost seven stone after a photo of her enjoying Ladies Day at Aintree made her realise how big she had become.

Catherine Swindlehurst, 24, from Blackburn, weighed 17st 10lbs, and squeezed into size 24 clothes when she visited the horse racing event with friends dressed in an orange frock back in 2013.

She says she felt ‘really nice’ but was shocked to see a photo of herself on MailOnline and couldn’t believe her size. 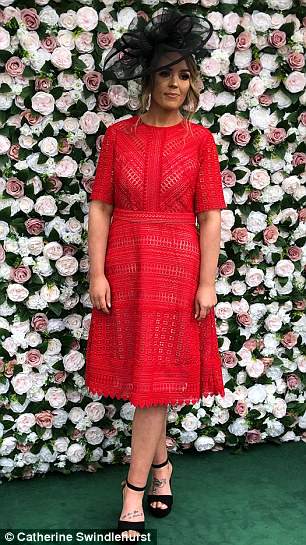 Catherine Swindlehurst once tipped the scales at 17st, but after seeing a photo of her at Aintree Ladies’ Day in 2013 (left), she joined Slimming World and has lost seven stone

The nursery manager immediately ditched her five takeaways a week, taught herself to home cook and watched the weight drop off.

And this year she returned to the horse racing event in a slinky size 12 dress, which perfectly showcased her 10st 8lbs frame.

Catherine said: ‘I felt really nice on the day but some of the comments underneath the story were not very complimentary.

‘People are so easy to judge without knowing why someone got that size. There were some really low blows. 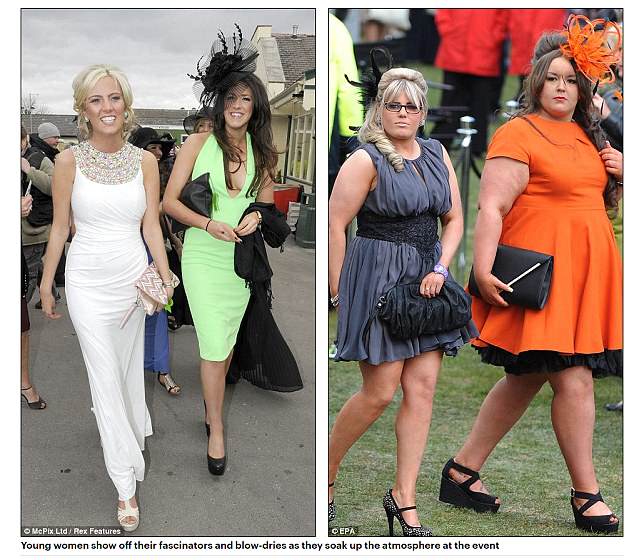 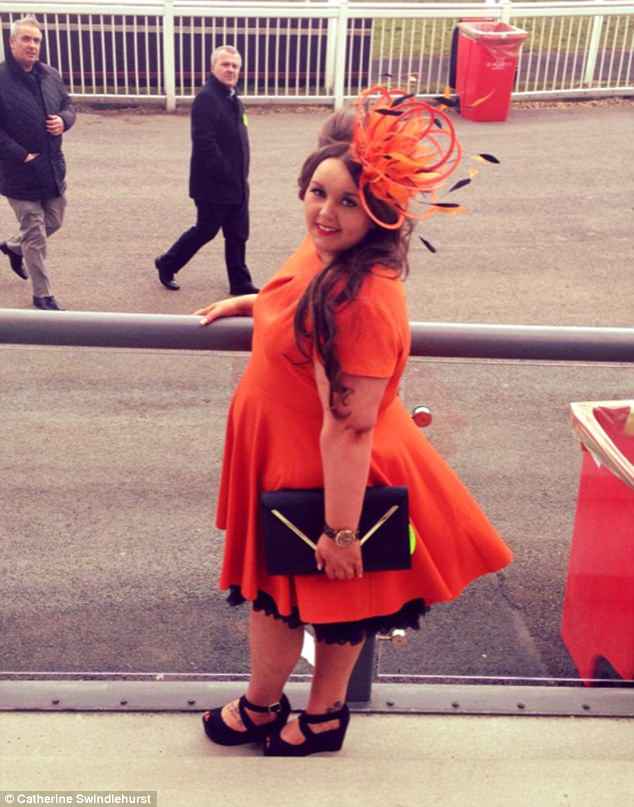 She says that the comments she received from readers were less than complimentary but she chose to lose weight for herself, not for anyone else

‘I look back and I don’t think I look bad but I lost the weight for me, not for anyone else.

‘I feel like a different person. I was confident back then but I carry myself a lot different now. I’m proud of what I’ve done. My body shape has changed drastically.

‘It’s taken a while to see what’s staring back at me in the mirror, not just what I’m used to seeing.

‘I don’t mind getting changed in front of people now, if we’re going on a night out. It is quite liberating.’

The fashion fan used to skip breakfast and would eat a sandwich and packet of crisps for lunch, followed by a ready meal or a takeaway for dinner.

She would sometimes down a litre of fizzy drinks a day and eat at least five takeaways a week. 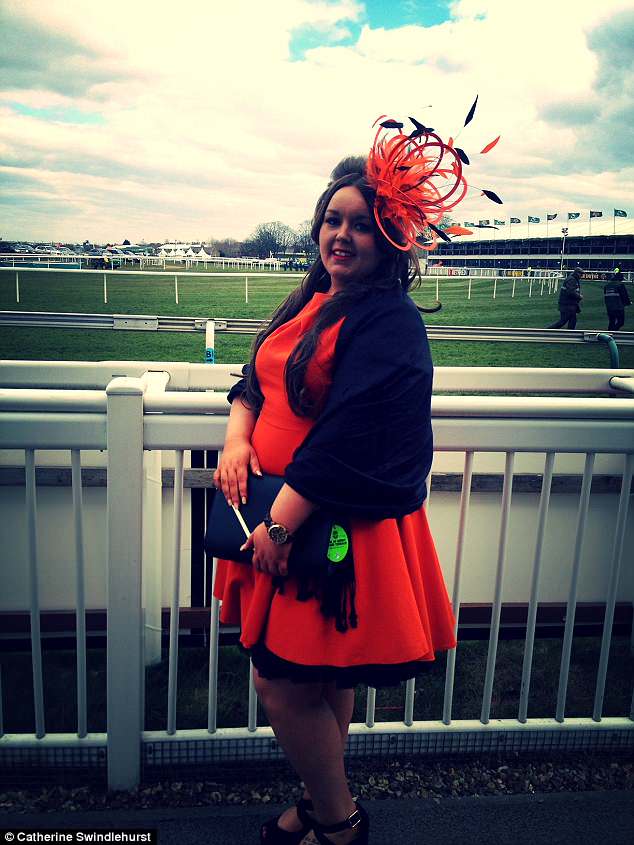 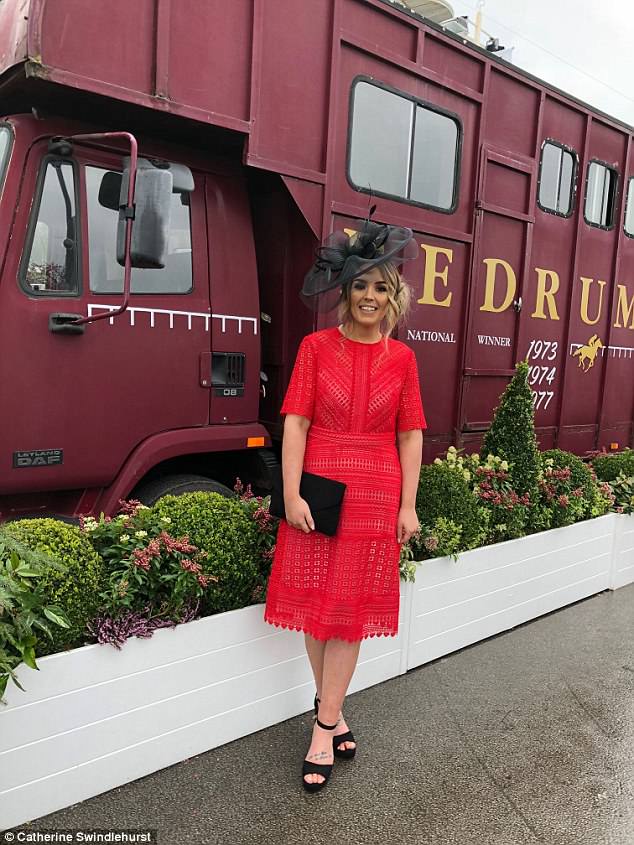 She returned to the races this year in a slinky size 12 dress, which perfectly showcased her 10st 8lbs

After struggling to shift the weight she decided to join Slimming World in 2017.

Catherine, who joked that she did not know how to boil an egg, knew she had to break bad habits including binge eating and comfort eating.

She added: ‘I started thinking about wanting to fall pregnant and one of my friends mentioned weight loss.

‘I thought ‘what if I struggle?’ I said to my friend “I’m going to lose some weight”.’

She began having eggs for breakfast along with a protein shake and homemade lunches such as chicken and rice with broccoli, or soup.

Dinner is also now cooked from scratch and could be home cooked sweet potato wedges with salmon and vegetables.

She set aside time on a Sunday to prepare healthy and nutritious meals for the week.

Catherine signed up with a gym and started working out with a personal trainer who she credits with boosting her confidence.

‘I eat a lot of protein, I’ve swapped fizzy pop for water which has improved my skin, and I snack on nuts, or other protein rich snacks like cottage cheese and carrot sticks,’ she said.

‘Everybody has been so supportive throughout the whole process.’

Catherine went to Ladies Day this year feeling like a new woman – and prepared for any photographer who might be taking photos at the Grand National.

She said: ‘I just felt like a new person, in every way shape and form. I wasn’t scared of getting photographed by the paparazzi.

‘But if I do, then who cares? ‘I’ve worked my butt off for the past year.’

Now she is looking forward to wearing a size 12 swimsuit on a trip to New York and Las Vegas.

But Catherine says despite her new health regime she does not plan to deprive herself of things she enjoys on holiday.

She said: ‘My biggest tip would be to enjoy your life and not let it change. I’m not going to go to New York on holiday and not eat a doughnut.

‘Food is very sociable, and you don’t want the numbers on the scales to dictate your life.’

Lunch: Sandwich and a packet of crisps

Drinks: Up to a litre of fizzy pop

Breakfast: Eggs and a protein shake

Lunch: Chicken and rice with broccoli or soup

Dinner: Salmon with home made sweet potato  wedges and vegetables