Rachael Ray’s high-end kitchen survived the fire that ripped through her upstate New York home as she confirmed that she and her family are safe.

On Monday the celebrity chef tweeted, ‘Thank you to our local first responders for being kind and gracious and saving what they could of our home. Grateful that my mom, my husband, my dog… we’re all okay. These are the days we all have to be grateful for what we have, not what we’ve lost.’

She added that she lost her cell phone in the blaze and sent the tweet from a team member and could not respond to calls and texts wishing her well.

DailyMail.com has learned from fire chiefs that the house had no fire sprinklers that could have stopped the spread the raging inferno and the house inside New York State’s Adirondack Park is in such a remote area that there were no fire hydrants for miles.

But still the celebrity chef, her husband, mother and dog escaped from the fire without injury — and the kitchen where she has been filming her show during the pandemic was virtually unharmed.

Ray was at her home in Lake Luzerne, New York, where she had been spending quarantine with husband John M Cusimano, 52, when the fire broke out Sunday night 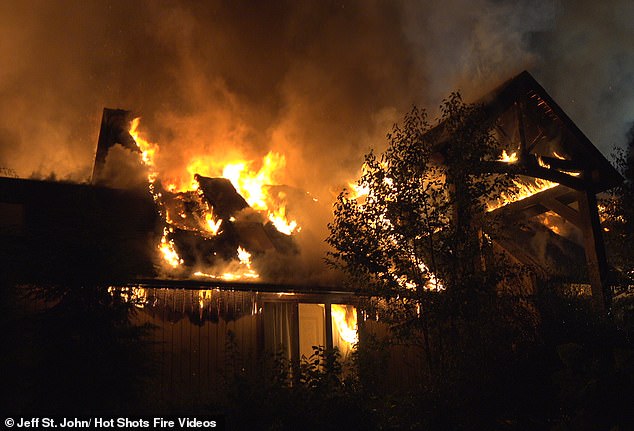 Fire crews were on site well past 11pm having been on scene for several hours tackling the fire. Ray, her husband, and mother were at home at the time and managed to escape the fire along with their dog, Bella, who also escaped alive from the blaze

Ray spoke out on Monday for the first time since the fire, thanking first responders and confirming that she and her family are safe

Ray, 51, was at home in Lake Luzerne, New York, with her husband John Cusimano, 52, and their dog Bella when the fire broke out shortly before 5:30 pm Sunday.

They all escaped unhurt and are now staying with neighbors. LaFlure said they managed to rescue several valuable pieces from the home with the help of staff and firefighters. 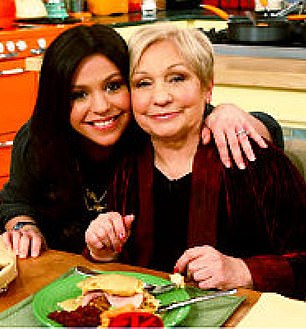 Some 70 volunteer firefighters from 14 different departments were called in when the fierce blaze broke out in the house’s roof on Sunday afternoon. They took nearly two hours to get the flames under control

‘The big problem was getting water to the scene,’ LaFlure said. ‘We are a rural area, there are no fire hydrants and that’s the way it is. You can only bring the water in with trucks, 1,500 or 2,000 gallons at a time and you can go through that very quickly.’

The firefighters soon sucked a pond on Ray’s road dry, he added, before then starting pumping from a lake.

‘And there was no sprinkler system which is something that down the road we would like people to deal with,’ said LaFlure.

‘The fire is more on the roof level,’ said LaFlure. ‘Fires don’t burn down very easily, they burn up, so there was substantial damage on the second floor but other than water damage and some ceilings that came down the first floor is in really good shape.’

He said Ray and her husband ‘are going through a very difficult time.’

LaFlure said the fire would have been much worse if it had broken out later in the day when the couple were asleep, but it was spotted before it took too much hold.

‘It could have been substantially worse. They were very fortunate. We tried to come as fast as we could, but it doesn’t come quickly. If you are down in a smaller urban area, the next fire department may be five or six minutes away, here you are talking 15 minutes away at least.’ 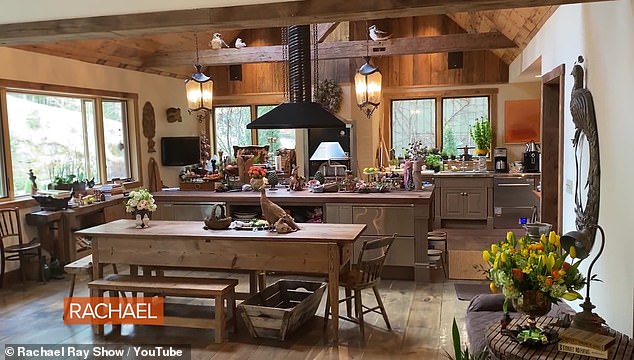 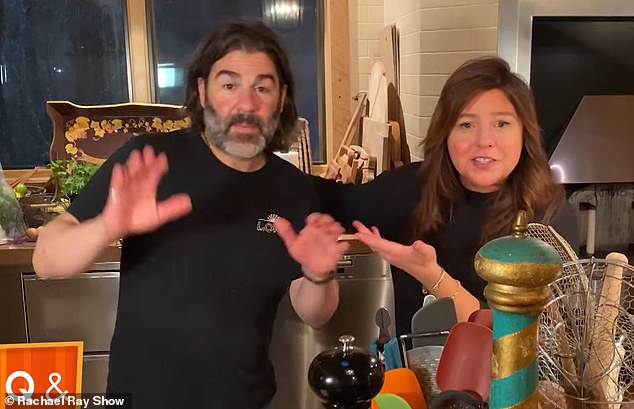 LaFlure said Ray and her husband ‘are going through a very difficult time’. her husband John appeared on the talk show as she hosted from their kitchen 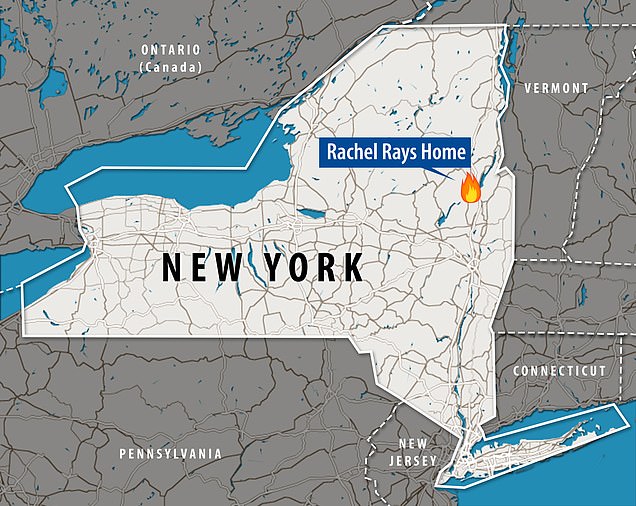 The home is located in upstate New York, about half an hour’s drive north of Saratoga Springs 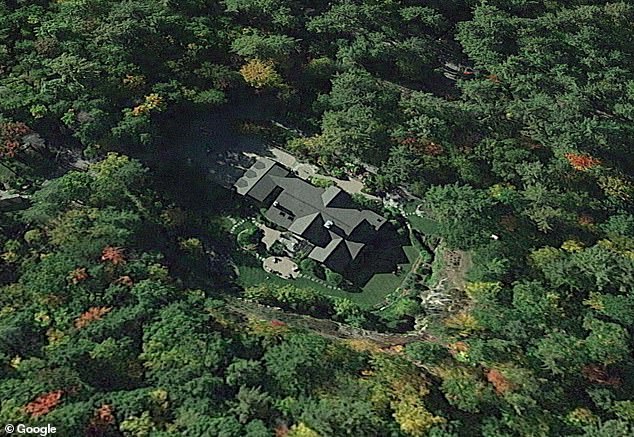 The home had no fire sprinklers and was is in such a remote area that there were no fire hydrants for miles, DailyMail.com can reveal

Luzerne-Hadley Fire Chief Ted Backus, who was first on the scene, could see flames leaping through the roof as soon as he arrived.

He immediately called for mutual aid from other volunteer fire departments from miles around.

The cause of the blaze is not known, but it is not thought to be suspicious.

Investigators from New York State’s office of fire prevention and control were still on site on Monday morning combing through the rubble of Ray’s home, which lies deep in the woods a quarter of a mile up a dirt road.

Department chief William McGovern said they are in the midst of a ‘methodical investigation’ which could take up to two weeks to determine the cause of the fire. ‘We will treat this like any other fire investigation,’ he said.

He said he could not put a figure on the loss. ‘All I know is that it is a beautiful piece of land and property up there.’

One neighbor said the blaze was so fierce the walls of Ray’s home glowed bright orange.

‘It was like the fire was coming through the walls,’ said who declined to give her name. ‘I ran outside and thought: This is bad.

‘It just went up so fast, it’s amazing they all managed to get out unhurt.’ 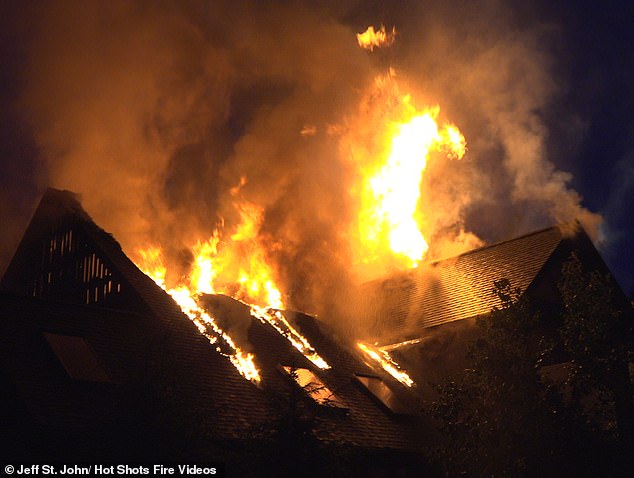 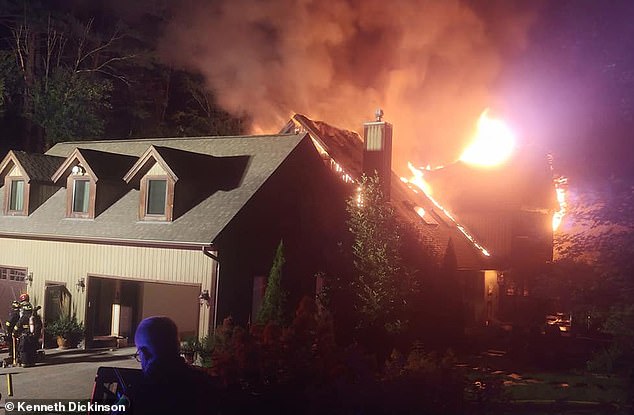 The cause of the blaze is not known, but it is not thought to be suspicious 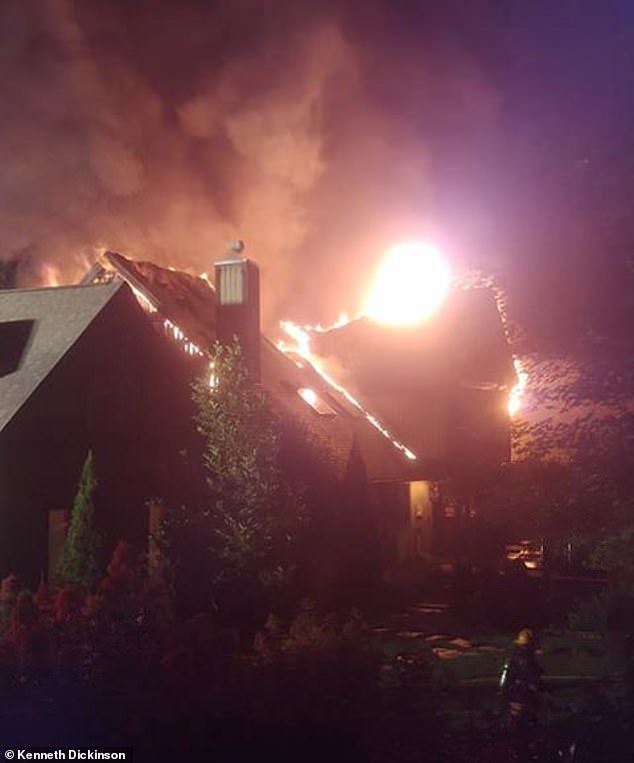 Luzerne-Hadley Fire Chief Ted Backus, who was first on the scene, could see flames leaping through the roof as soon as he arrived. He immediately called for mutual aid from other volunteer fire departments from miles around

Ray has lived in the southern Adirondacks for years. Her mother at one stage ran a Howard Johnson Inn in neighboring Lake George, and she ran the pub at the luxury Sagamore Hotel before finding fame as a TV chef. She owns almost 200 acres of land around Lake Luzerne.

She has been filming and cooking up a storm from her home since the coronavirus pandemic began and in April posted video online of her kitchen, in which she revealed that she designed it herself by drawing it out on a piece of paper.

‘I decorated the house before it was ever built,’ Ray says in a video tour of her kitchen and pantry. ‘I drew the house on a piece of paper so I knew what I wanted it to be in my mind.’

The spacious, open-plan design allowed Ray to film her show from the comfort of her own kitchen.

In a video clip that gave a tour of the kitchen, she revealed that her two favorite appliances was the six-burner gas stove and her wood-fired pizza oven, which she referred