The star of the recent Oscars ceremony cuts an anonymous figure as she drags her suitcase up the stairs of the Young Vic cafe in Central London.

Rachel Shenton, previously best known for playing a wannabe-Wag in the teen soap Hollyoaks, captured the hearts of the world earlier this month when she appealed for more help for deaf people as she accepted an award for the short film she wrote and starred in.

Since that unexpected triumph, her life has been manic.

Star of The Silent Child Rachel Shenton (right) and her fiance Chris Overton (left), who directed the film, have barely had a second to fully savour the fact they have won an Oscar. The couple are pictured with its star Maisie Sly, five

The 30-year-old and her fiance Chris Overton, who directed the film, have barely had a second to fully savour their achievement.

They are fresh off the train back to London when we meet, and have dozens of phone calls to make.

Everyone wants to talk to them now: charity leaders, schools, the media, producers.

The bosses of Strictly Come Dancing are even said to have suggested Rachel might take part in the show.

‘But I’d be way too terrified,’ she says. ‘Anyway, there’s too much else to do.’

‘Surreal’ is Rachel’s favourite word to sum up her experience of making The Silent Child, which will be aired on BBC1 on Good Friday.

The poignant 20-minute film, which won an Academy Award for Best Live Action Short, is about a young deaf girl who can’t communicate with her family, who can all hear.

But her life changes — briefly — when a caring social worker, played by Rachel, teaches her sign language.

The film was Rachel’s first script and the first film Chris had ever directed. 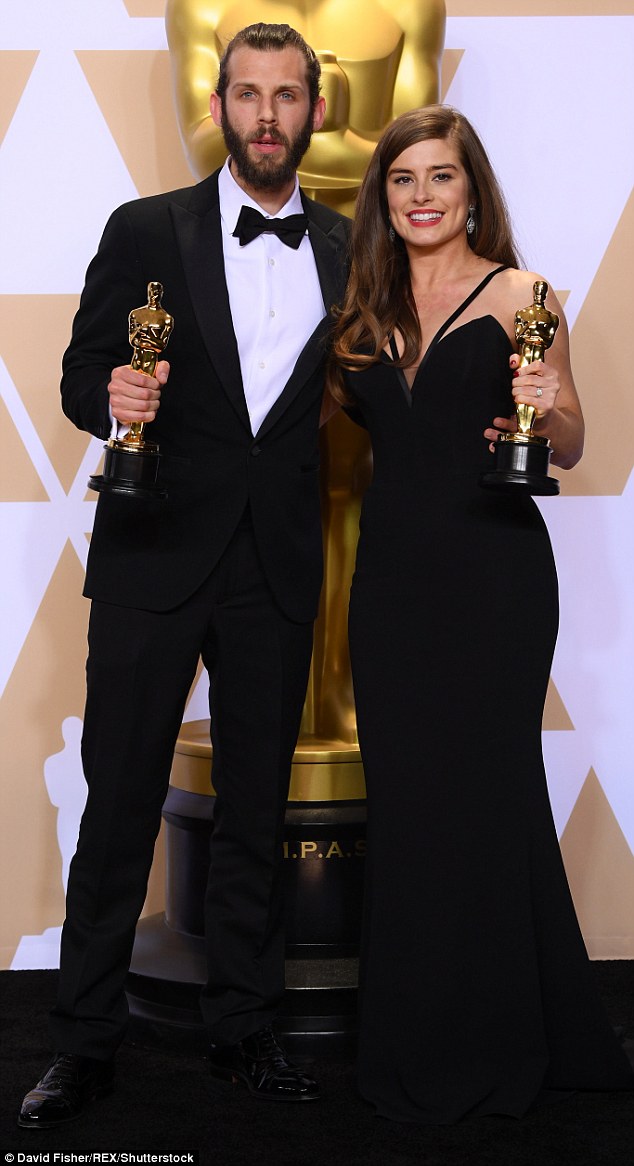 Their star was Maisie Sly, a profoundly deaf five-year-old who was barely old enough to read the script; Chris had to learn sign language to direct her.

They spent more than a year trying to fund the project. ‘We were excited just to get it into a few festivals,’ recalls Chris.

‘And then it was long-listed for an Oscar. Then it was shortlisted. And then . . .’ He shakes his head and grins.

Their statuettes — they were each given one — now sit on the bookcase in their flat.

The highlights of their Hollywood trip included a lunch at which they met Steven Spielberg — who promised to watch their film.

On the night itself they followed Salma Hayek up the red carpet, but were too busy looking after Maisie to really concentrate.

‘She was relaxed and that helped us,’ says Rachel. ‘She was mainly concerned about when she’d get to eat. The rest of it is a blur.’

While Rachel’s sign language acceptance speech made it the talking-point of the Oscars, it wasn’t calculated. 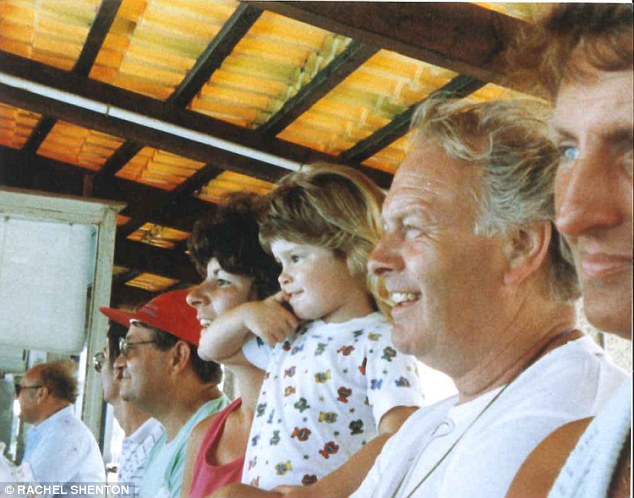 ‘Every time we thought about preparing one, we felt weird in case it didn’t go our way,’ says Rachel.

‘But I promised Maisie I’d do it in sign language if we won — and as Chris and I were going to be up on stage, I wanted her to be looking at us, not her interpreter.’

Since they returned home, friends and family members have each had a turn at holding the Oscar statuettes — but their main focus has been using the win to continue their campaign.

Admittedly, helping the deaf is not the sexiest of causes. No one is going to start wearing black or attaching a ribbon to their outfit to help deaf children gain better access to education. But it’s a subject very close to the couple’s hearts.

They want to turn The Silent Child into a feature-length film which will, again, star Maisie.

Rachel is halfway through writing the first draft, which follows her young deaf girl as she becomes a woman.

Rachel, born in Stoke-on-Trent, has a deeply personal reason for espousing this particular good cause. 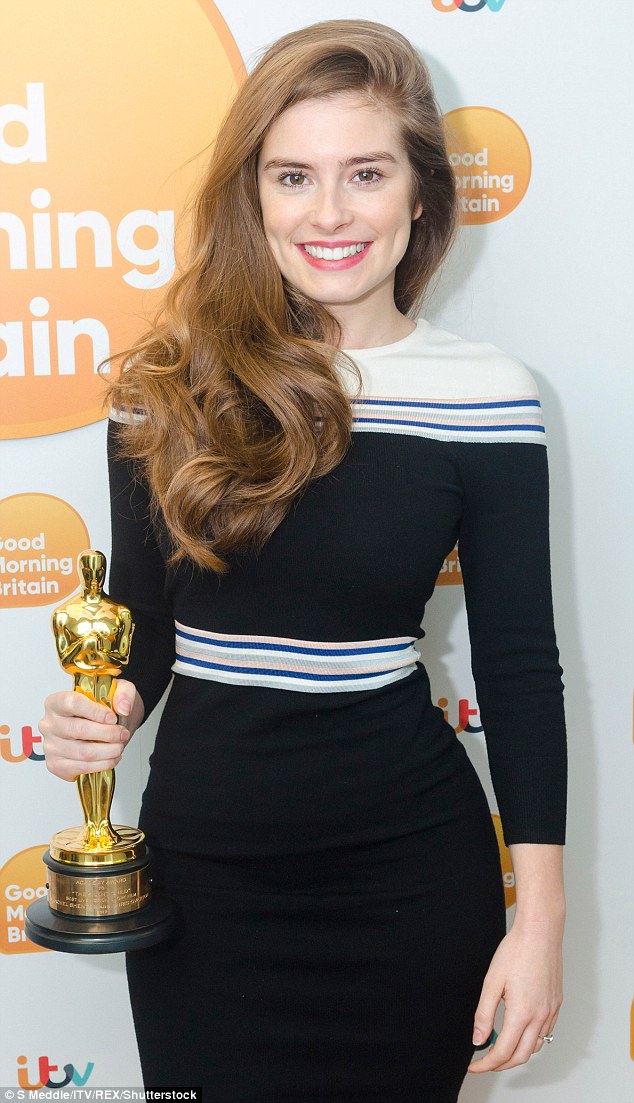 Rachel (pictured on ITV’s This Mornign) was 12 when her father, Geoff, contracted throat cancer. The chemotherapy he received affected his ears and he slowly went deaf

She was 12 when her father, Geoff, contracted throat cancer. The chemotherapy he received affected his ears and he slowly went deaf.

Although he died two years later, when Rachel was 14, by then she was learning sign language and it became a refuge for her as she mourned.

‘It was the first time I’d ever seen my dad vulnerable,’ she says. ‘You couldn’t just shout to him from another room. Going out for dinner became impossible for him because of all the competing voices.

‘He could speak, so he’d say, ‘I don’t know what you’re saying’ and we would gather around him as a family so he could see our lips. But it was hard for him to adjust.

‘He was just getting around to the idea of using sign language when he died.’

By then Rachel had made friends at her sign language classes — and even when she started working as an actress, first in Holby City and then in Hollyoaks, she volunteered for deaf charities in her spare time and became increasingly frustrated at the way deaf people, and children in particular, were treated.

‘Being deaf is not a learning difficulty, but 58 per cent of deaf children fail to get five A-C grades at GCSE,’ she says. ‘With the right support, they should be able to do everything a hearing child can do.’

In her short film, the middle-class parents of young deaf girl Libby don’t know how to handle her deafness.

‘Ninety per cent of deaf children are born to hearing parents and it is common not to know what to do,’ says Rachel. ‘There isn’t the education there for parents.’ 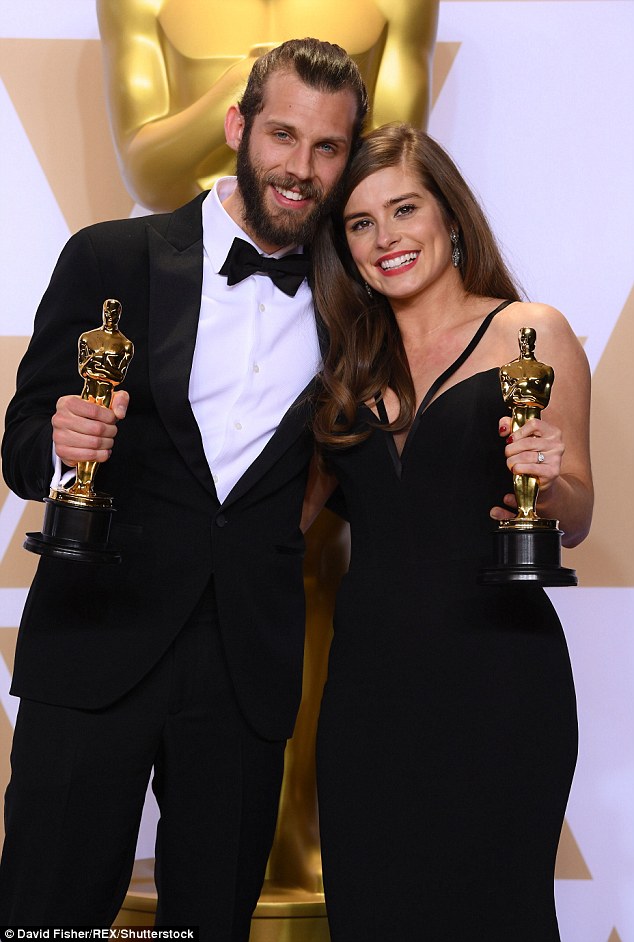 Although he died two years later, when Rachel (pictured with fiance Chris) was 14, by then she was learning sign language and it became a refuge for her as she mourned. She says he is the reason she won her Oscar

Rachel’s character tries to persuade the parents to use sign language with their daughter, but they refuse, thinking it is better for her simply to read lips.

‘That’s why it is important that we have these conversations and I am so proud that winning on the world’s biggest stage means people are now talking about it.’

Rachel was living in LA and starring in a teen drama in which one of the leading actresses is deaf when she began thinking of the story for The Silent Child.

The show even had an entire episode in sign language — but Rachel had to learn a new version, as U.S sign language is not the same as British.

She became romantically involved with Chris, a former Hollyoaks co-star looking for work in LA, and he encouraged her to write the drama. When he saw the script, he knew he wanted to direct it.

Raising the £10,000 needed to make the film became a family affair.

Chris’s parents, who used to run a bakery, made hundreds of cupcakes which Rachel’s mum sold. They also created a roadshow, ‘Deaf not Stupid’, to take to schools and workplaces.

It has taken two years from start to finish — but now their publicity aims have been achieved. The issue was even discussed in the House of Commons, with Theresa May singling out the drama and its young star for praise.

‘Thanks to my dad, my eyes were opened to this world,’ says Rachel. ‘He is always on my mind and I feel incredibly proud that I have done this because of him.’