The number of hate crimes recorded by police in England and Wales has hit its highest ever level, with racially-motivated offences rising by more than 4,000 in a year.

Anti-Semitic graffiti was scrawled across a synagogue, shops and cafes in London’s Hampstead and Belsize Park, December 2019

At the same time, a separate report published by the government department, looking at hate crime trends during the coronavirus pandemic, warned that rises in racially or religiously aggravated hate crime in June and July were a third higher than the previous year.

The provisional findings said this is ‘likely to be related to the Black Lives Matter protests and far-right groups’ counter-protests in England and Wales following the death of George Floyd on the 25 May in the United States of America’.

It came as Victim Support reported a 62 per cent increase in the number of people being referred for help over the summer.

The charity said intimidating behaviour from neighbours had fuelled the ‘extremely concerning’ rise in the number of hate crime victims needing support between July and August. 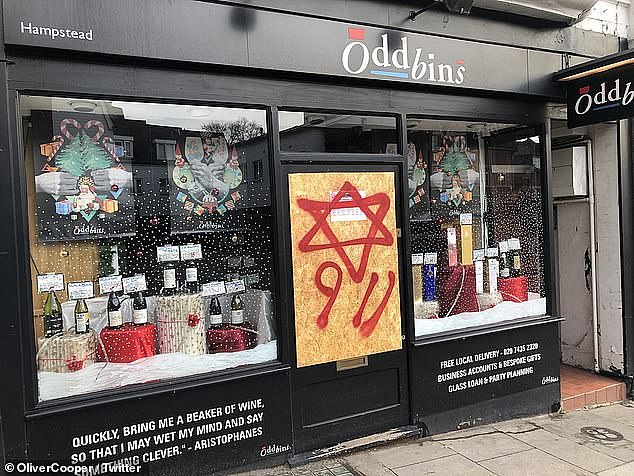 Race hate crimes accounted for around three-quarters, 72 per cent, of hate crimes

But the report added: ‘These percentage increases are smaller than seen in recent years.’

It put the rise in hate crime over the last five years down to ‘improvements in crime recording by the police’ but added that there had been spikes in reports following events like the EU Referendum in 2016 and the 2017 terror attacks.

The figures do not include the number of reports made to Greater Manchester Police because the force is still unable to supply data to the Home Office due to a computer glitch when installing new software last year.