‘The Failing New York Times, in one of the most devastating portrayals of bad journalism in history, got caught by a leaker that they are shifting from their Phony Russian Collusion Narrative (the Mueller Report & his testimony were a total disaster), to a Racism Witch Hunt,’ Trump tweeted.

The president is referencing comments The New York Times’ Executive Editor Dean Baquet made during a town hall meeting with staff on Monday where he said the paper would be shifting its focus from the Russian investigation and report to the president’s perceived racism.

Trump said, in light of the report of Baquet’s comments and as a continued attack on the ‘fake news,’ that media is just working to push out Democratic Party propaganda.

”Journalism” has reached a new low in the history of our Country,’ Trump continued in a Twitter thread Sunday morning. ‘It is nothing more than an evil propaganda machine for the Democrat Party. The reporting is so false, biased and evil that it has now become a very sick joke…But the public is aware! #CROOKEDJOURNALISM’

Donald Trump criticized The New York Times after a leak revealed the paper was shifting its focus from the Russia probe to focus on ‘race’ and ‘other divisions.’ Trump called the new attack a ‘Racism Witch Hunt’

In a Twitter thread, Trump also said ”journalism” has reached a new low’ 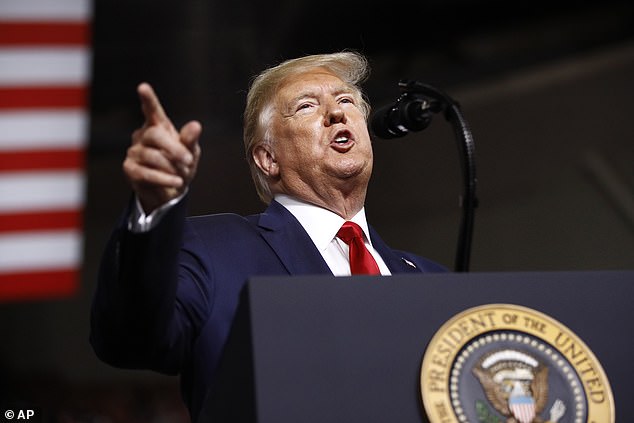 Recently, Democrats have been attacking Trump for comments they say are ‘racist’ or words of a ‘white supremacist.’ The president is claiming these attacks are just attempts to shift the negative focus after the Russia probe led to no indictments and no impeachment

A transcript of the meeting at the Times was leaked, revealing Baquet realizes the Russian collusion story had reached its end.

‘We built our newsroom to cover one story, and we did it truly well,’ Baquet said during the more than hour-long meeting. ‘Now we have to regroup, and shift resources and emphasis to take on a different story.’

He added that the Times had covered the Russia probe ‘better than anybody else.’

‘I think that we’ve got to change,’ Baquet continued, claiming that the New York City-based paper had to ‘write more deeply about the country, race, and other divisions.’

‘I mean, the vision for coverage for the next two years is what I talked about earlier: How do we cover a guy who makes these kinds of remarks?’ Baquet said of the president. ‘How do we cover the world’s reaction to him? How do we do that while continuing to cover his policies? How do we cover America, that’s become so divided by Donald Trump?’

In the past few months, there has been a fluctuation in Democrats claiming the president is a racist.

A climax in those claims happened earlier this summer, when the president attacked a group of four freshman congresswomen, telling them to ‘go back’ and fix their countries of origin. This was widely viewed as racist. 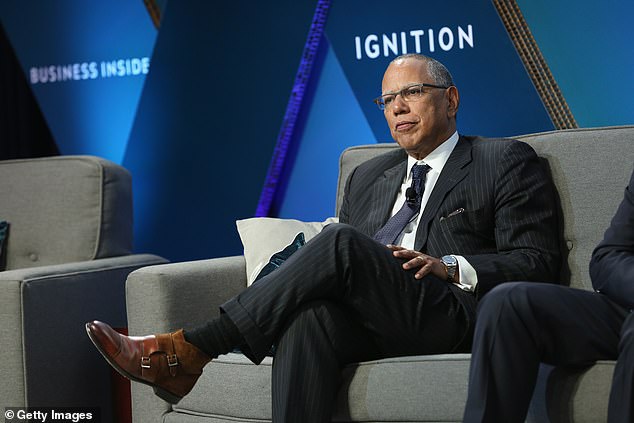 During a town hall, the Times editor Dean Baquet(pictured) said, ‘We built our newsroom to cover one story, and we did it truly well,’ referencing the Russian probe. ‘Now we have to regroup, and shift resources and emphasis to take on a different story’

Trump claimed his approval ratings would be much higher if he was covered fairly by the media. He is currently hovering in the mid-to-high 40s in Rasmussen Reports daily approval tracking poll

He was referencing four minority representatives: Alexandria Ocasio-Cortez, Ilhan Omar, Rashida Tlaib and Ayanna Pressley. Of the four, only Omar was not born in the U.S.

Trump claimed this comments were not covered properly, and says if the media treated him fairly, his poll numbers would be much higher.

‘With all that this Administration has accomplished, think what my Poll Numbers would be if we had an honest Media, which we do not!’ Trump tweeted Sunday.

The president’s approval rating, according to the daily tracker from Rasmussen Reports, hovered at 46 per cent as of Friday. During the post-inauguration bump in January 2017, the tracker had Trump at his high of 59 per cent approval.

Trump’s approval has not seemed to take a hit, even in light of recent comments that Democrats claim are racist or words of a ‘white supremacist.’

In July, he came under fire after attacking Oversight Committee Chairman Elijah Cummings, claiming he was running a ‘disgusting and rodent infested’ district – mainly making reference to the city of Baltimore.

Cummings is black and Baltimore is more than 60 per cent African-American and black, causing many to accuse the president’s comments of being racially charged.

He said in one tweet that ‘no human being would want to live’ in Baltimore.

Democrats, including several of those running for president in 2020, also used the aftermath of two mass shootings earlier this month to blame Trump for creating an environment where people felt emboldened to carry out this sort of violence.

One of the alleged shooters, 21-year-old Patrick Crusius, posted an online manifesto before opening fire on an El Paso, Texas Walmart. It included several racist tropes and anti-immigrant sentiments – and many pointed to parts that seemed to echo phrases used by Trump.

According to police, Crusius told them his goal was to kill as many Mexican as possible.

On TV in the days following the shootings in El Paso and Dayton, Ohio, which resulted in 31 deaths total, Democrats called Trump a white nationalist whose rhetoric inspired this sort of violence.