A viral video captures the moment an irate man went on a racist tirade at a Texas Macy’s after two employees spoke in Arabic with one another.

The footage was posted by a man named Ricky on Christmas Eve and shows the man spewing his hate at the crowd in the Dallas-area store.

‘I really walked into a Twitter video irl today,’ the man said in his Tweet posts including two clips from the altercation. ‘This man made two women cry after publicly humiliating them. Please help me find this awful guy’s information.’

The first clip starts with a woman bystander stepping in and going off on the  man after he went on his initial tirade. 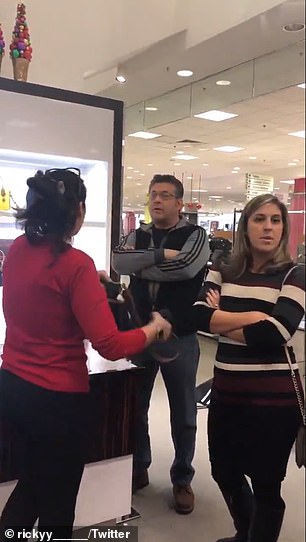 ‘Leave the store. She already told you,’ said the woman, wearing a striped sweater. ‘There’s not a gift box for that. Leave! … You’re disrespecting her.’

The two go back and forth about calling security, and then the man turns and tells the manager, ‘get this woman out of my face … she’s interfering with my purchase.’

The man continues berating the woman about how she is just a customer before turning his sights back on the employees and shouting that he doesn’t speak Arabic.

‘Is this some kind of TV show going on right now? Because I can’t believe you’re going to sit here and talk to somebody because you don’t understand them,’ said a black man who was watching the ordeal escalate. ‘They were talking to each other, right? Were they talking to you?’ 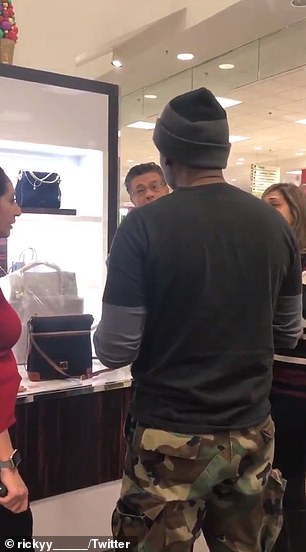 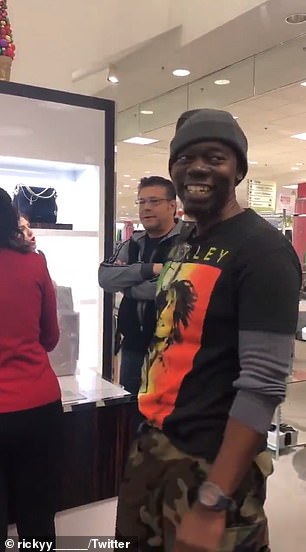 The racist concedes that he didn’t know what was actually being said by the women but asserts that they were ‘sort of’ talking to him.

‘And get these customers away from me. All the Arabs, all you Arabs and Democrats. Go back to where you came from … how many Arabs came out of the woodwork?’

Soon, Ricky and the man go back and forth with the cameraman declaring that the racist is a ‘snowflake.’ 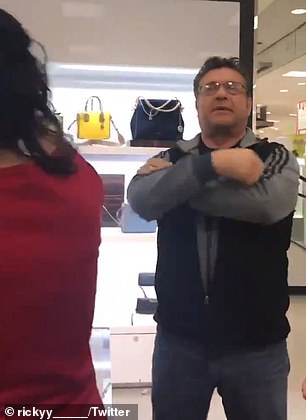 Once he hears that, the racist tells Ricky ‘F**k you!’ before making his way out of the department.

At one point in the clip one of the women blasts the man for not having a dollar to pay for the box, prompting several of the bystanders to fetch bills out of their wallets to give to the man.

Ricky added: ‘A few more details. There was 10-12 diverse lovely people backing the woman up and showing kindness to the employees. When I confronted the guy for making the women cry, he shouted homophobic slurs, said to get out of his face bc he paid $300 and left.’

The cameraman would later explain that the man was throwing his tantrum because he was unable to get his purchase gift-wrapped exactly how he wanted to in that particular department.

‘He demanded they give him a box for free with his purchase, but the lady informed him it doesn’t come with one and that she could send him upstairs to have it wrapped, but he refused,’ Ricky explained to Yahoo Lifestyle. ‘No one really paid attention to him until he brought up ethnicity.

‘Overall, it wasn’t a pretty situation, but it truly made my day seeing a crowd of people, who are not shown in the video, stand up for what’s right,’

A Macy’s spokesperson said of the incident: ‘We believe our Macy’s employees and customers should be treated with dignity, respect and kindness. We aim to create a welcoming environment, and we apologize for what occurred in our store. We are investigating this incident.’

No police report has been filed yet concerning the altercation.