Racist hackers wearing blackface managed to crash a Zoom party that was held for African American students who attend the University of South Carolina.

Members of the Association of African American Students (AAAS) fell victim to internet trolls who hacked into their Zoom call during their organization’s annual cookout event on Friday.

In the footage, more than a dozen of horrified students were seen placing their hands over their mouths or recording the incident as at least three individuals appear on the screen.

One screen shows a man with a background of an individual dressed in blackface.

Another screen shows a man wearing blackface with a swastika in the background. 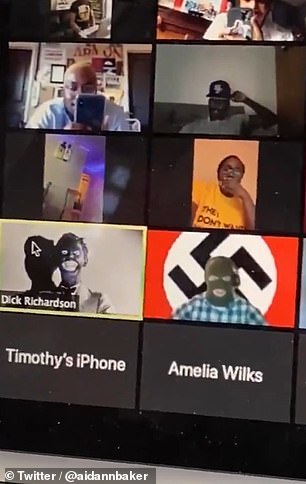 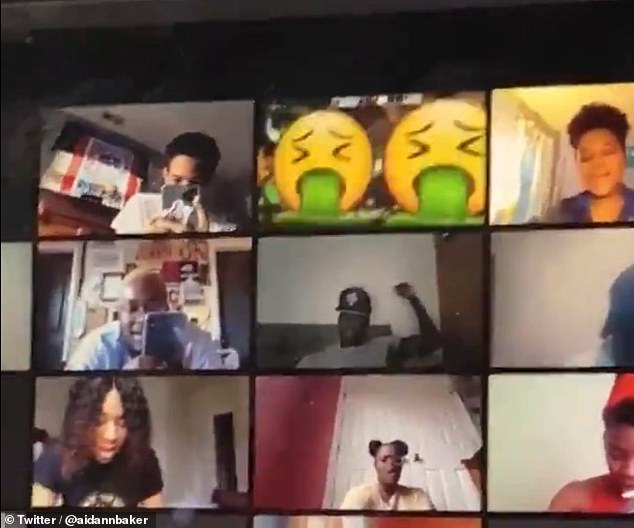 A third screen (top center) also appeared to have been a hacker, who showed up on camera before putting up multiple emojis and other imagery

A third screen also appeared to have been a hacker, who showed up on camera before putting up multiple emojis and other imagery.

It’s unclear exactly what was said during the incident, but racial slurs were used.

The students reported the incident to campus officials and University of South Carolina President, Bob Caslen, who said in a tweet: ‘What happened at the AAAS Cookout is absolutely unacceptable & disgusting.’

‘I can’t apologize enough to the @UofSCstudents who witnessed such ignorance while gathering to fellowship with one another during this unprecedented time. University officials are aware & are investigating,’ he added.

Caslen then released a statement about the incident on Saturday, saying the unknown persons who hacked into the call ‘displayed hateful imagery and offensive racial slurs’.

‘Our students, who gathered in fellowship during a time of hardship and uncertainty, expected that they’d be in a safe, welcoming environment.

‘Unfortunately, that environment was breached by cowardly individuals looking to cause harm during this already difficult time,’ Caslen said.

Caslen said the university’s Division of Information Technology has contacted Zoom and requested that the incident be investigated. 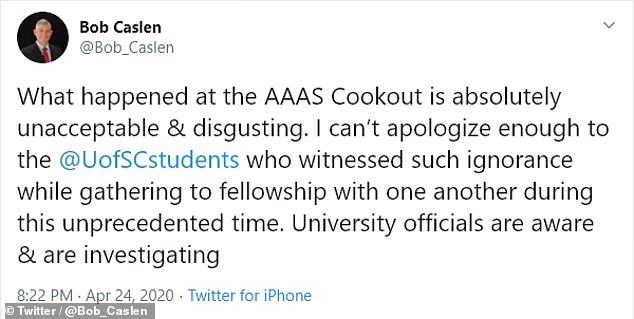 The students reported the incident to campus officials and University of South Carolina President, Bob Caslen, immediately released a statement 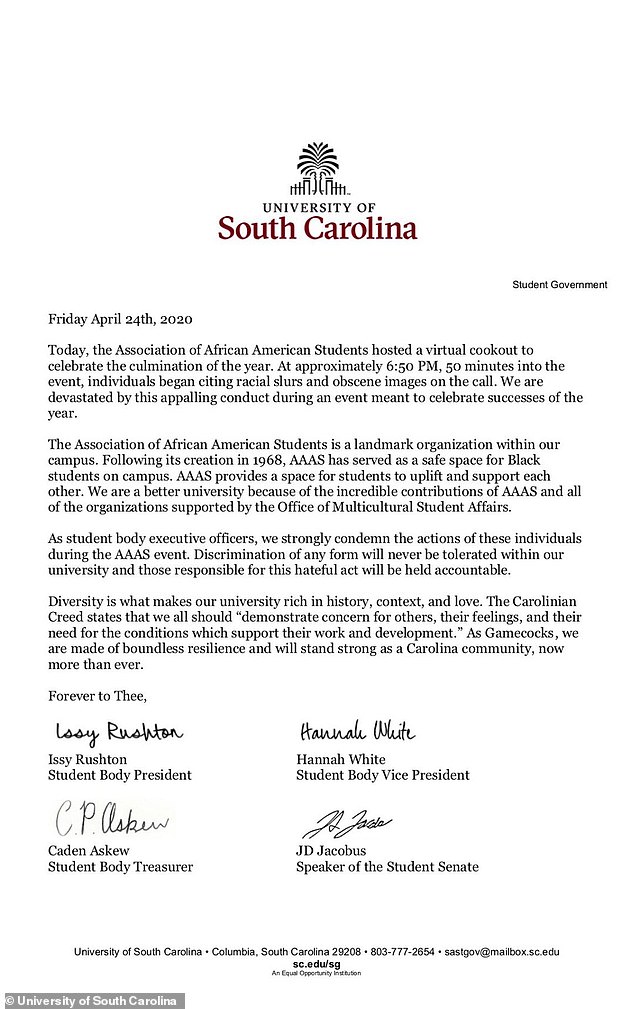 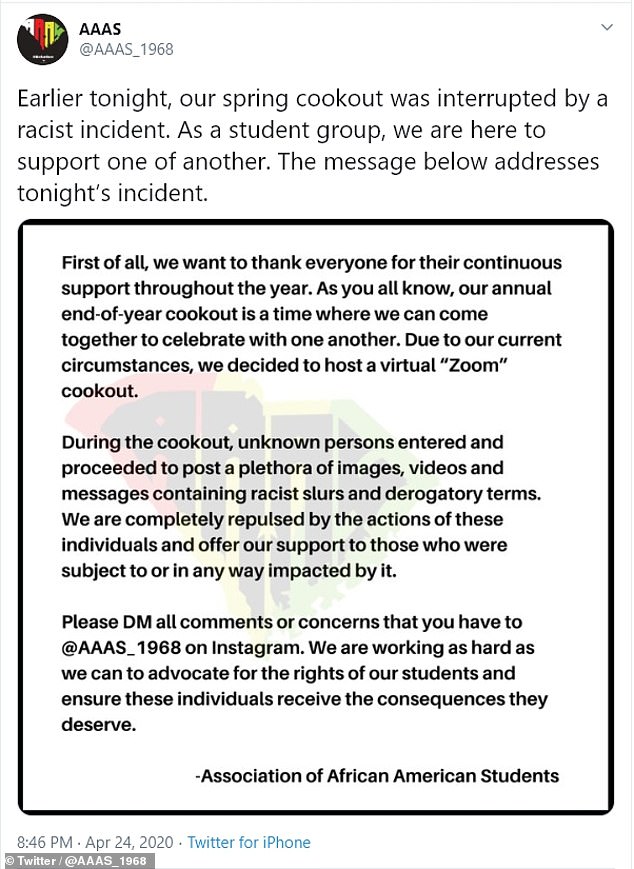 ‘Our Office of Equal Opportunity Programs has been notified and is prepared to investigate in the event that it is determined that University students committed these terrible acts,’ Caslen said.

Caslen also noted that the Office of Diversity and Inclusion ‘stands ready to assist any AAAS member who needs assistance’.

AAAS also released a statement that thanked people for their support while adding that they are ‘working as hard as we can to advocate for the rights of our students and ensure these individuals receive the consequences they deserve’.

This isn’t the first incident in which internet trolls have crashed Zoom meetings and events after the coronavirus-driven lockdown of millions of people has caused a massive growth in use of platforms like Zoom, Skype or Microsoft’s Teams application.

Zoom was banned by many schools around the world, Elon Musk’s venture SpaceX, Asia-focused bank Standard Chartered as well as governments in Germany, Taiwan and Singapore after hackers disrupted Zoom video chats they weren’t invited too, which is known as ‘Zoombombing’.

Zoom CEO Eric Yuan has appointed former Facebook security chief Alex Stamos and a number of other experts to attack these concerns and security researchers say it has responded robustly to the issues.

Last week, Yuan outlined the rollout of a new version of the app with more encryption features that go into effect this week.

Lea Kissner, formerly global lead of privacy technology at Google, and now a security consultant for Zoom, said the 256-bit GCM encryption being introduced with Zoom 5.0 next week was in line with what others in the industry were using.

All Zoom customers will switch to the new cryptographic mode from May 30, Kissner said.