Racist minor league hockey fans in Quebec harassed a black player and his family with bigoted slurs and physical intimidation until they left the arena before the game had ended.

Jonathan-Ismael Diaby, a semi-professional player for Jonquiere Marquis, was targeted by St. Jerome Petroliers du Nord fans who referred to him as a ‘big n*****,’ as the 24-year-old Montreal native told CTV News.

‘Other people were saying: “You big n****,” and “You baboon,” telling my dad to go back home,’ Diaby told CTV Montreal on Tuesday. ‘At one point I was in the penalty box and I pulled my shirt over my face because I was almost crying.’

One fan spent several minutes harassing Diaby in the penalty box, waving his arms like a gorilla and allegedly showing him pictures of a baboon.

One fan spent several minutes harassing Jonathan-Ismael Diaby in the penalty box, waving his arms like a gorilla and allegedly showing the 24-year-old defenseman pictures of a baboon 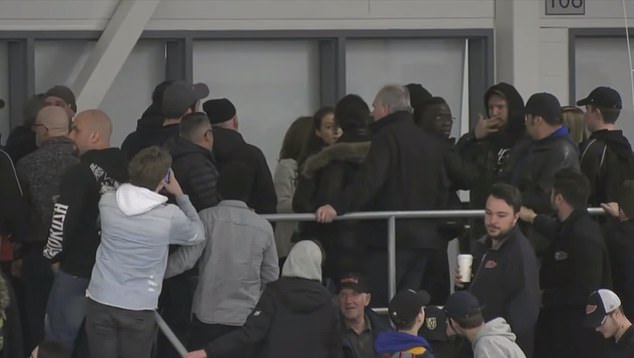 Footage from the arena showed fans crowded around a man purported to be Diaby’s father (right). Ultimately Diaby joined his family in the stands and they exited together

One of Diaby’s teammate’s tried to get the fan to stop, but was unsuccessful.

According to Montreal’s CTV news, other fans told Diaby he should be eating bananas.

Things were reportedly worse for Diaby’s family in the stands. Opposing fans allegedly pushed and hit Diaby’s father and even poured a beer on his girlfriend.

Diaby – who was drafted by the Nashville Predators in 2013 but never reached the NHL – was sent to the box for a second time in the second period, but opted to serve the penalty in the dressing room.

Later he asked officials to take action and organize security for his exit for the arena, but that never happened according to CTV.

Ultimately Diaby joined his family in the stands and the group left before the final horn.

Footage from the arena showed fans crowded around a man believed to be Diaby’s father.

‘Security didn’t do nothing,’ Diaby told CTV. ‘They asked my family to just leave. They asked them to just change places so they could have a quiet game.’ 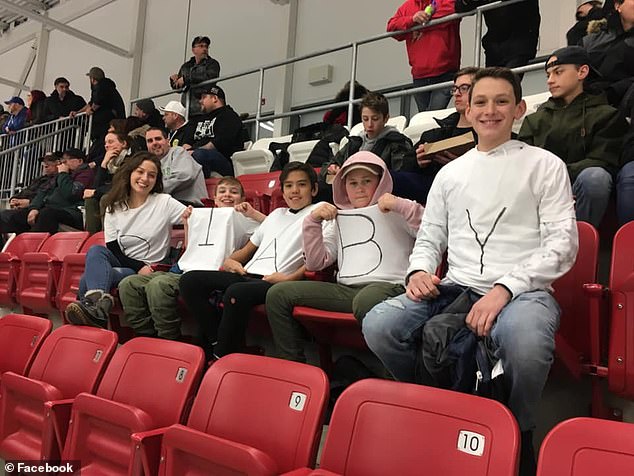 Later Diaby told CBC that he had to put his jersey over his face because he ‘had teardrops’ in his eyes.

‘My dad was told to go back home, that he had no business in this country,’ Diaby told CBC. ‘People were touching his hair, they were making fun of him. My sister was scared, my girlfriend was scared.’

Prior to the game, Diaby posted a picture on his Facebook page that showed his girlfriend, her brother and his friends wearing white T-shirts that spelled out his name, ‘D-I-A-B-Y.’

‘My girlfriend, her brother and her friends,’ he wrote. ‘Ready for a beautiful evening.’

‘As commissioner of the Ligue Nord-americane de hockey, I want to apologize to Jonathan Diaby and his family,’ said Jean-François Laplante. ‘Racist, sexist and homophobic comments are unacceptable and intolerable, be it in everyday life or in our arenas. … Intolerance of differences is based on ignorance. To fight it we have to denounce it and talk about it. That’s why I invite many of you to share this video. I am Diaby. 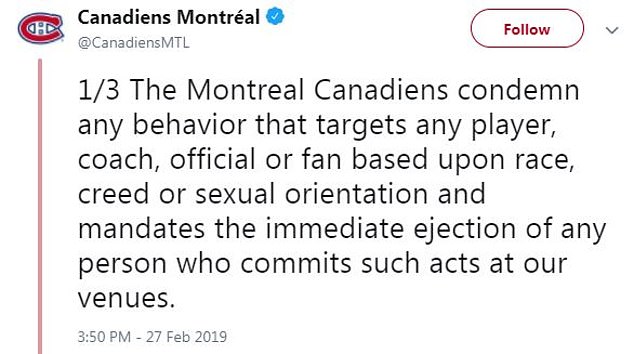 Politicians and the Montreal Canadiens condemned the racist harassment publicly

‘The events that happened Saturday … have no place in the large family of hockey,’ said Francis Desrosiers, captain of the Pétroliers de St-Jérôme. ‘Please continue to come out and support us, but with respect.’

Local politicians as well as the NHL’s Montreal Canadiens condemned the racist acts as well. 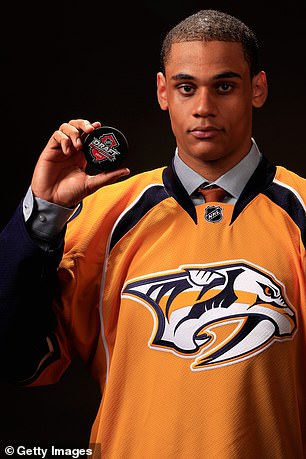 Montreal native and former Canadiens winger Georges Laraque said he endured similar treatment as a black player in the NHL, but never anything so overt.

‘This is the worst thing that I have ever seen,’ Laraque told CBC. ‘When I started to play hockey – and I lived some racism when I played hockey – but it was never to that level.’

Laraque condemned the bystanders when speaking with CTV.

‘There were 1,250 people in the stands and nobody did anything to stop that,’ he said. What is that, endorsing it? If there is a minority kid watching that game, and his dream is to play hockey, what do you think he’s going to do? He’s going to not want to play hockey, they’re going to quit.’

St. Jerome Petroliers du Nord officials are reviewing the tape to identify the fans and ban them from future games.

‘This is not hockey,’ Diaby told CBC. ‘That’s far beyond what should be happening on a regular Saturday night. Nobody should feel threatened to see his son go play a hockey game.’ 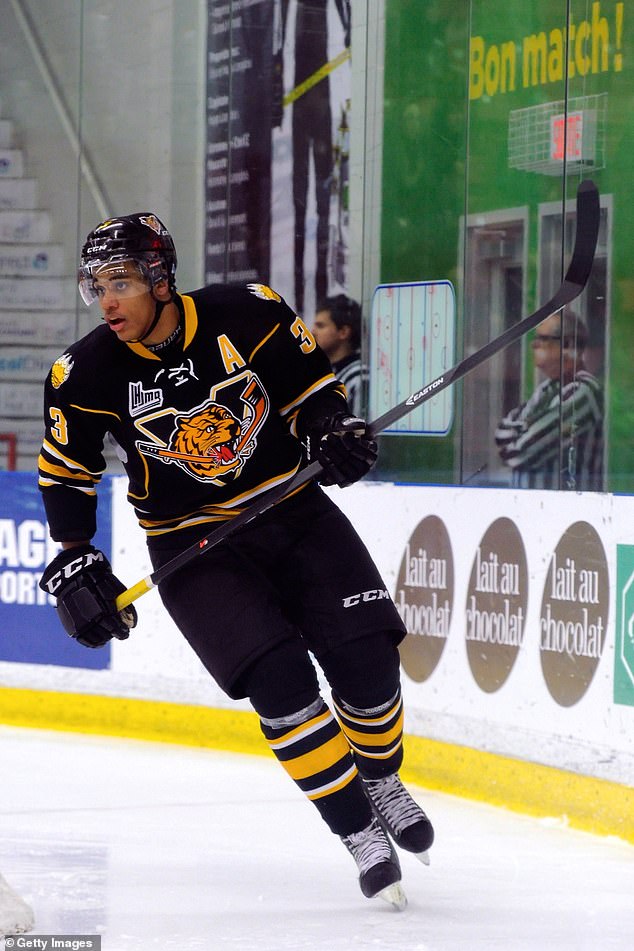 Although he was drafted by the Predators, Diaby never made it higher than the American Hockey League, which is the NHL’s top affiliated league. In this picture from 2014, Diaby is playing for the Victoriaville Tigers of the Quebec Major Junior Hockey League